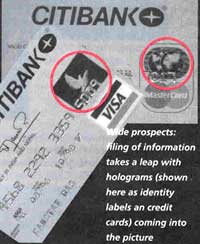 INITIALLY developed for electron microscopy, holograms have found a range of applications from gift shop CHIJositics to identification labels on credit cards, Recently, a new application Was added to this list - holographic data stora-e. R H Berg and his collaborators at the Riso National Laboratory in Deninark have investigated a new molecule which could potentially rcVolutionise data storage (Nature, vol 383, No 6600).

The main advantage of holographic storage is its tremendous data density - of the order of hundreds of gigabits per cubic centimetre. The essential idea is to replace the information content of an image by the data one wants to store and retrieve it by standard methods. There have, however, been several difficulties in Putting this idea into practice. The material on w1iich data is to be stored has to be thermally stable, reusable (so as to be able to have read ad write memory) and also efficient enough to allow tile data to be read quickly. Several materials (such as photorefractive polymers) have been unsuccessfully explored in tile last few years.

Berg and his team have designed a new class of organic materials - peptide oligomers (a polymer whose molecules consist of fewer units), containing azobenzene chromophores (parts of molecule responsible for a compound's colour). The oligomer, called DNOS (diamino acid-N-alpha substituted oligopeptide) has azobenzene chains linked to a peptide-like back- bone. In the DNO molecule, the backbone is made up of ornithine and the steps consist of azobenzenes which are cigar- shaped molecules.

The structure is similar to that Of DNA in which the back- bone is made up of deoxyribose linked by phosphate molecules while the steps are made up of' pairs of bases. The rod-like structure of azo dyes has been used previously for a range of applications from holographic storage to liquid crystal films. This unique structure of the molecule is what makes it suitable for use as a holographic data storage medium.

The basic technique in making a holograrn is to expose a light- sensitive material to a laser beam that has been split into two parts by a beam splitter. One of the split beams is directed on the object and reflected. When this reflected beam interferes with the other half of the split beam (called the reference beam), we get an interference pattern. The hologram is made by recording this pattern which gives us a three-dimensional picture when the reference laser beam shines on it.

The laser acts on the azobenzenes but not on the ornithine. The interaction of the azobenzene and the laser is such that the azobenzene molecules become perpendicular to the polarisation of the incident laser beam. And since the azobenzene is closely packed and held in place with the backbone into a helix, the whole molecule responds ill a similar fashion rather than in a random way. This important property makes DNO an ideal candidate for holographic storage.

Berg and his colleagues made films of good optical quality with a thickness of about five micrometres. This was done by using hexafluoroisopropanolic solvents since the DNO is insoluble in most solvents. The DNO was then filtered through a fine-grade glass filter and cast onto a glass substrate and vacuum dried. The holographic experiments were carried out using an argon ion laser with polarisation beam splitters. The researchers have created holographic gratings (a surface ruled with equally-spaced parallel lines used to produce spectra by diffraction) with a resolution of about 500 lines per mm.

The practical implications of the DNO in holographic memories is difficult to predict since there are several hurdles to be crossed. Firstly, the write time is still quite long - of the order of a few seconds. Some changes in the structure of the molecule seems to speed up the time, but not very appreciably. Secondly, it is not clear whether the same mechanism which works for thin films will work for thick films which are needed for high data densities.

But the new material has the advantage of being extremely stable since the holograms have survived without any loss for over a year at room temperature. In any case, the new molecule has immense potential to revolutionise optical data storage.