Thousands of people are trapped in Balasore district, which is far from areas hit by cyclone 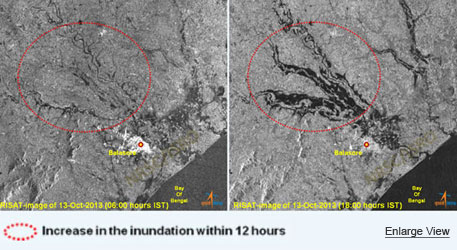 After the cyclone, the National Disaster Management Authority and National Disaster Response Force (NDRF) personnel are battling floods. The situation is critical in Balasore district's Sindhia and Fariki villages in Remuna block. These areas are far from where cyclone Phailin made a landfall.

Around 8,000 people have been trapped in the “unexpected flooding”. Rivers Budha Balanga and Subernarekha are in spate, and this is hampering rescue operations. The government has rushed one navy helicopter and divers to rescue the trapped villagers.

R S Gopalan, director agriculture, told Down To Earth that Balasore was hundreds of kilometres away from cyclone Phailin. "There is heavy downpour and sudden increase in the river level," he said.

The situation is also turning alarming in Mayurbhanj district. Senior officials of the state government have called an emergency meeting to tackle the threat of floods. Officials claimed that flood was expected but that it would not be widespread.

Fariki and Sindhi villages have been reportedly cut off from road route. "We have no option but to press helicopters in both areas," Gopalan said.

The state government is also planning to send few contingents of NDRF to Balasore. These contingents are likely to be picked up from those who are already carrying out relief operation in Phailin-affected areas.

Special relief commissioner Pradipta Mahapatra who has rushed to the emergency meeting said that a new plan would be in place in hours.