Floods in 4 states lead to economic loss of Rs 19,000 crore in past one year 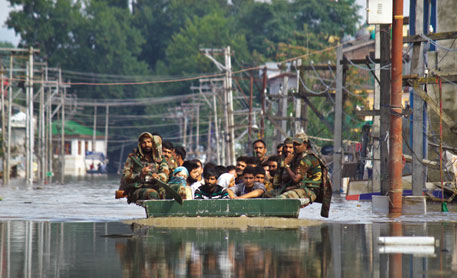 Since October 2013, when Phailin hit Odisha’s coast, India has witnessed a series of extreme weather events like cyclonic storms, cloudbursts, floods, droughts and hailstorms. These events not only destroyed lives and livelihood of people, but also caused a huge economic loss to the state and national economies.

In the period between October 2013 and October 2014, floods in three states—Odisha, Assam and Jammu & Kashmir—have affected more than 19.3 million people, suggest reports. Over 62,000 people have been affected by floods in Gujarat and Bihar in the same period.

Last October, Cyclone Phailin  claimed 44 lives and left behind a trail of destruction that severely crippled people’s livelihood. Over 256,600 homes were damaged and about 13.2 million people in 18,370 villages were affected. Since then Odisha has been hit thrice by cyclones and floods.

The recent floods in Kashmir, its worst ever in four decades, have left a scar on lives of close to five million people and the homes of nearly three million people was submerged in flood waters.

Some other big numbers that can substantiate the extent of damage caused by these disasters are those that relate to losses to the economy as a whole. Floods in four states—Odisha, Assam, Meghalaya, J&K—this year have cost the country Rs 18,612 crore till now.

According to ASSOCHAM estimates, devastating floods in J&K alone have caused an immediate loss of Rs 5,400 to 5,700 crore to the state's economy. Apart from this, estimated loss to hotels, trade, agriculture-horticulture, roads and bridges in the Jammu and Kashmir region is expected to be around Rs 2,630 crore. Infrastructure, including railways, power and communication in the hilly terrains, would have suffered a loss of about Rs 2,700-3,000 crore, says the national industry body.

While the rehabilitation cost estimates due to Hudhud may not have been assessed yet, the reconstruction cost following 2013’s Phailin (providing basic services and land acquisition) has been pegged at about Rs 2,800 crore. The Jammu and Kashmir government had recently sought a special financial package of Rs 44,000 crore for rehabilitation of flood-affected people.

Year 2014 that began with the occurrence of Arctic polar vortex, a phenomenon that brought unusual chill to North America and Europe, also brought freak hailstorms to India. These hailstorms that occurred in February and March put an end to farmers’ dreams of a good harvest in Maharashtra. While many farmers were yet to count the losses, another demon in the form of delayed and deficit monsoon knocked the doors of farmers across India.

Check out the table below to see more figures on how various spells of droughts and hailstorms, along with floods and cyclonic storms, have affected people across India this year.
Please add table from excel file.