As some parts of India continue to experience deficient rains, parts of the northern states of Uttar Pradesh and Uttarakhand and eastern states of Bihar, Assam and Arunachal Pradesh have been inundated by incessant, heavy rains and swollen rivers that are flowing above the danger mark. The death toll in the current spell of heavy rains has almost touched 100 and a few million people have been displaced.

The number of people killed in flood-ravaged Uttar Pradesh rose to 49 on Monday with water in the swollen Rapti river rising continuously.

According to Central Water Commission (CWC), Rapti river rose to 105.47 metre, 0.85 metres above the danger mark. CWC said in a statement that the floods in the state are “unprecedented”.  Not only Rapti, the river Ghaghra too rose to 107.61 m, which is 1.54m above the danger mark of 106.07 m. Floods in the Bhada, Kaudiyala and Gerua rivers in Nepal is reported to have led the Ghaghra and Saryu in Bahraich and the Rapti in Shravasti to swell.

According to the latest forecast by CWC, the two places where water level in the Rapti and the Ghagra rivers are the highest are Balrampur district and Elgin Bridge in Barabanki district of the state. While water level at Balarampur is now receding, water level in the Ghagra river is still on the rise. The highest that Rapti had reached during floods was 105.25m on September 11, 2000 while the higest level touched by Ghagra in Barabanki was 107.55m on October 10, 2009.

The floods have seriously affected districts of Bahraich, Shravasti, Balrampur, Gonda, Lakhimpur, Barabanki, Sitapur, Faizabad and Azamgarh. According to chief secretary Alok Ranjan, around 1,000 to 1,500 villages have been affected by the floods. Teams of Uttar Pradesh Provincial Armed Constabulary and Sashastra Seema Bal has been sent to the flood affected areas for relief and rescue operations. 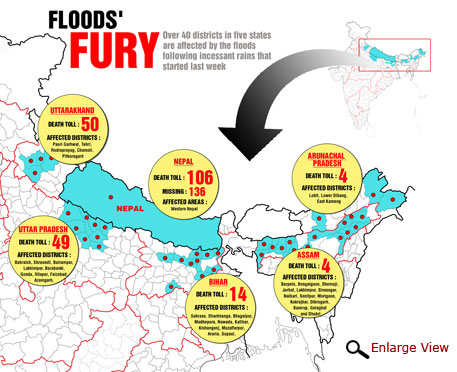 Ranjan also said that Bahraich was the worst hit with 202 affected villages. A National Disaster Response Force (NDRF) team deployed in the area and army has provided two helicopters for relief and rescue work. The extent of crop and property damage is yet to be ascertained.

The Kosi region of Bihar is once again facing heavy floods, bringing back memories of the deadly flood that displaced three million people and left over 200 dead on August 18, 2008.

Heavy rains coupled with heavy release of water from Nepal have led almost all the rivers rising in spate in Bihar. The situation is alarming in Darbhanga with the threat of breach at Kamla Balan embankment. Engineers of water resource department are battling to strengthen the embankment.

In Nawada, at least 10 people have been killed due to floods, two persons died in Supual and one in Madhepura, taking the death toll due to floods to 14.

In Ramchandrapur panchayat of Gopalganj, a breach in embankment has left around 1,000 people stranded. Angry victims of floods in Aurai panchayat have decided to launch stir from August 25 against the government inability to control floods.

Shashi Shekhar, a river activist in Manki block of Supaul said that it on August 17 that the Kusaha embankment of the Kosi river breached in 2008. “History is repeating itself,” he said. Around 60,000 people in these districts have moved to safer zone with cattle to escape the wrath of the Kosi.

Vysas ji, principal secretary of disaster management department along with chief secretary Anjani Singh undertook an aerial survey of the flood- affected districts; they told media persons that situation is alarming but under control.

In Saharasa, Supaul and Madhepura, around 40,000 people are living in relief camps established by the state government.

Special secretary of disaster management department, Anirudh Kumar told media persons that nearly 1.3 million people are affected by floods in the state. “Nawada is the worst-affected district with 716,000 people affected by flood,” he said.

Sporadic incidents of breach in embankments have been reported from Bhagalpur and Sitamarhi.

Two other states in the east, Assam and Arunachal Pradesh, also reported heavy flooding. Seven persons have died in the two states in the current spell of heavy rains and floods.

As many as 50 people have lost their lives so far due to incessant rain, floods and landslides in Uttarakhand. River Alaknanda, Mandakini and Pindar have caused heavy erosion in the districts of Pauri Garhwal, Rudraprayag, Tehri, Chamoli and Pithoragarh districts.

More than 16 villages have been completely inundated while over 30,000 people have been displaced due to the heavy rainfall in the state from Thursday till Sunday. From Sunday, the weather has improved and the rivers in spate are returning to normalcy.

Kosi embankment breach in Nepal: Need for a paradigm shift in responding to floods