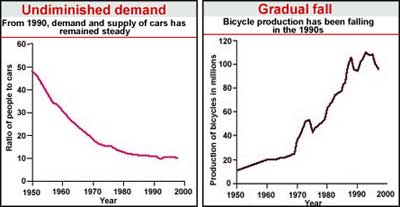 As the global energy crisis escalates, eco-friendly modes of transport are being increasingly ignored. This is reflected in the rapid growth in air travel, which has increased nearly 100-fold since 1950. It touched an all-time high in 1998 with 2,600 million passenger-km (a measure of passenger traffic that takes into account the total distance flown). In stark contrast, bicycle production has dropped steadily throughout the '90s, touching 94 million units in 1997. The sale of automobiles also dipped, although marginally, with the ratio of people to cars in 1998 staying put at 11.7 per cent. Production of cars, too, fell to approximately 38 million.