Small wonders from our scientists: ultra-small aircraft that will fly into hazardous areas and bring back data 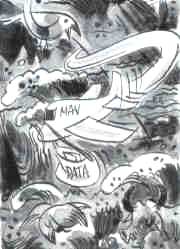 NEWS from home: Indian aeronautical scientists and engineers are working on an ambitious project called Micro Air Vehicles (MAY) to produce aircraft that will not be much bigger than the palm of our hand. These "palm-top" planes will be crucial in operations which would require them to fly to spots where no man has gone before, inaccessible natural disaster sites for instance. Scientists often have difficulty in collecting data after, say, an earthquake has struck a certain part of the country. These MAYS, they hope, will be of immense help in gathering information about the causes and parameters of quakes and other natural disasters for studies aimed at minimising damage in the future.

In a paper presented at a recently-held conference on aerospace in Hyderabad, Andhra Pradesh, V J Sundaram, advisor to the Bangalore-based Aeronautical Development Agency, said that getting reconnaissance data from risky areas will just be a routine affair now. Disaster managers can get precise information on cyclones, fires, floods and gas leaks from the very core of these catastrophes using these tiny bird-sized planes that will fly into otherwise-hazardous zones and fish for data. The MAY project is all set to revolutionise aerodynamics in India, said Sundaram.

These miniature palm-top planes are just 15 centimetres (cm) in length, have an operating range of five kilometres (km) and can fly continuously for about half an hour. The MAVs, .details reveal, can fly at speeds of up to 40-50 km per hour and reach an altitude of 100-200 metres. Their payload, depending on what mission they are on, will include reconnaissance, surveillance cameras and sensors of various types - chemical, biological, acoustic or even nuclear radiation detectors.

"Integrated efforts of aeronautical, mechanical, electrical, electronic and chemical engineers required for the proper implementation of this project are now underway," Sundaram said.

The MAVs will be driven by pulse jets and conventional propellers. Small electro-motors or alcohol-powered micro engines will run the five-cm propellers. Pen-sized pulse jets with carbon composite tubes acting as combustion chambers, can also be used for faster travel.

Sundaram pointed out that in order to tackle higher winds and gusts, robust control will be essential. He said that the developers of the MAV project are currently considering remote-controlled rudders and carbon dioxide jets. Silicon accelerometers based on the micro electro mechanical system (MEMS) technology and quartz microgyroes will be used for the basic position and altitude-sensing units.

For handling sudden gusts, the planes should have greater drag and less lift. Drag is the wind resistance an air-craft experiences when moving forward, while lift is the force that keeps it air-borne. Sundaram said the scientists will be exploiting the engine exhaust to skirt this hurdle.

To make these more aerodynamic, scientists plan to incorporate the fuel tanks and combustion chambers into the main airframe as in missiles. Wings made of silicon will serve as energy sources while the fins will double up as communications antennae. Electrical power can be generated from lithium batteries and fuel cells, Sundaram explained.

The final hurdle that now faces the MAV is its payload. Reconnaissance and surveillance systems will probably use MEMS, MOMS (micro opto mechanical systems) and microelectronics to produce two-cubic-cm micro-imaging systems. These images can then be stored in dense three-dimensional memories based on the rugged biological molecules like the photo-sensitive bactero-rhodopsin. MEMS technology will produce the required chemical sensors.

"Integrating all these concepts will throw up a miniature version of the conventional aeroplanes. Isolation of heat, vibration and electromagnetic interference in the system has to be implemented carefully," Sundaram told the delegated attending the conference. "India has the required resources to make a mark in the emerging area of MAVs," he added.