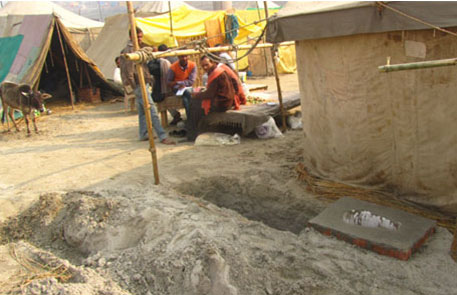 “In the last two years, we did a study in 12 cities under the water and sanitation programme of the World Bank. Out of 62 million people staying in these 12 cities, two-thirds are dependent on onsite sanitation systems, and only 22 per cent of faecal sludge produced is managed safely,” Almud Weitz, principal regional team leader at Water and Sanitation Programme East Asia and the pacific and south Asia- World Bank, Indonesia, told reporters at the conference on Monday.

She added: “Our study clearly indicates that the focus of funding/financing has been on developing/expanding the sewerage system, on how to increase the coverage in a city, say from 5 per cent to 7 per cent, while faecal sludge management (FSM) is neglected.”

Weitz cited an example. “In Dar-es-Salaam, Tanzania, the sewerage system caters to 10 per cent of urban households while 99 per cent of the budget allocated for sanitation is spent on maintenance and up-gradation of the sewerage system and almost nothing is done for the majority of the population. Hence a lot needs to be done in FSM. There is a need to change the mindset.

Sanitation service delivery is much more than infrastructure development and policy should incorporate sanitation at a city-wide scale,” she said.

The Hanoi conference brings together world-class research and science and donors, cities, utilities, investors and other stakeholders, with the aim of fostering an effective dialogue to solve the problems of handling human waste.

The missing link in sanitation service delivery: a review of fecal sludge management in 12 cities