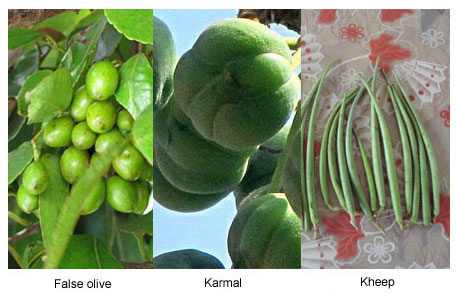 There is a variety of nutritious and tasty foods that grow in India but these benefit only a few—those who live in areas where these plants grow. The problem is that most of the local foods cannot be stored and technologies to preserve and store them have not been developed. This has resulted in a shift to foods like cereals and pulses which may not be as nutritious but can be stored easily. Vegetables like karmal (Dillenia pentagyna) and false olive (Champereia manillana), found in the Andaman and Nicobar Islands, kheep (Leptadaenia pyrotechnica) found in Rajasthan and gumma (Leucas aspera) consumed in West Bengal have more or less disappeared from our plates.

Local food is losing favour even in rural areas even though it is available there. The younger generation is not aware of most of these food items. With easy access to money, youngsters in Punjab prefer soft drinks instead of the traditional lassi or thandai.

Then there are food items that are losing ground because the environment in which they grow is degraded. In Bihar, production of makhana (Euryale ferox), a valued food during fasting seasons, has gone down due to destruction of wetlands where they grow. This nutritious seed is now sold at high prices, keeping it out of bounds for the poor.

There is very little evidence on how this declining food diversity has affected our health. A study published in European Journal of Clinical Nutrition in 2006 correlated the prevalence of malnutrition to lower consumption of traditional food in Medak district in Andhra Pradesh. The researchers found that chronic energy deficiency and vitamin A malnutrition was common among rural dalit mothers in all the 37 villages studied. They suggested that increasing the consumption of local traditional food like sorghum, pulses, vegetables and animal source food would improve the nutritional status in the region. The researchers then studied this experimentally. They found that mothers from intervention villages where traditional diet was promoted had significantly higher intake of energy and protein in the summer and higher intake of energy, protein and iron during the rainy season. Sorghum contributed 29 per cent of energy, 33 per cent of protein and 53 per cent of iron, and green leafy vegetables contributed 21 per cent of vitamin C and 38 per cent of vitamin A, the researchers noted in their study published in the Asia Pacific Journal of Clinical Nutrition in 2007.

Local foods are rarely a subject of research. In the Indian Institute of Vegetable Research in Varanasi, the crops that are being studied for increasing yields or improving varieties are tomato, chillies, brinjal, cucumber, bottle gourd, bitter gourd, okra, musk melon, pumpkin and pea . These vegetables are not representative of India’s biodiversity. The Indian Agricultural Research Institute’s department of vegetable sciences recently made efforts to increase consumption of healthy foods through development of superior varieties of indigenous and under-utilised vegetables like fenugreek, wild brinjal, cowpea, cluster bean, bankla, sem, tinda, ras bhari, phoot and kakdi.

Healthy foods can be brought back on the plate if efforts are made to find ways like those taken by non-profits and industry in case of jackfruit. This vegetable is now available in the market in the form of varatty (a kind of jam), tinned tender jackfruit, vacuum fried fruit chips, papad, pickle, burfi and tender jackfruit thoran (stir fry).