Food insecurity continues to be major threat for Africa and Asia 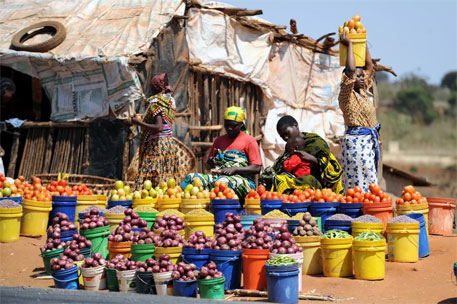 The world may be on the right track when it comes to achieving global hunger reduction targets. But what is scary is that we are nowhere closer to achieving the World Food Summit (WFS) target of halving the number of undernourished people between 1990 and 2015.

Since 1990-92, out of 63 developing countries monitored by the UN’s Food and Agriculture Organization, only 25 have already met the WFS goal. Despite the overall progress in developing countries as a whole, there is still considerable room to reduce undernourishment and improve food security.

According to The State of Food Insecurity (SOFI) 2014 report, despite overall progress, marked differences across regions persist. Sub-Saharan Africa has the highest prevalence of undernourishment, with only modest progress in recent years. Around one in four people in the region remains undernourished.  Nevertheless, the prevalence of undernourishment in sub-Saharan Africa has declined from 33.3 per cent in 1990–92 to 23.8 per cent in 2012–14. Growing political commitment to promote food security in Africa is being transformed into concrete results,” says the report.

Asia, the most populous region in the world, still has the highest number of undernourished. Asia as a whole has a prevalence of undernourishment of 12.7 percent, corresponding to 526 million people, or an eighth of the region’s population, chronically lacking access to enough food. 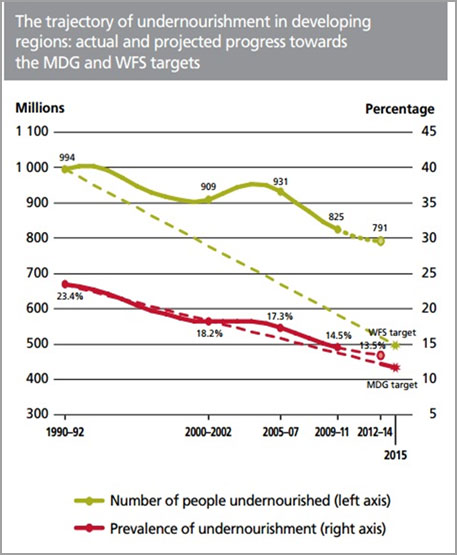 What determines food insecurity?
The WFS of 1996 established four dimensions of food security: availability, access, stability and utilisation. The availability dimension captures not only the quantity, but also the quality and diversity of food.  The access dimension comprises indicators of physical access and infrastructure such as railway and road density; economic access. The stability dimension is divided into two groups. The first group covers factors that measure exposure to food security risk with indicators like area under irrigation and the second group focuses on the incidence of shocks such as domestic food price volatility, fluctuations in domestic food supply, and political instability.  The utilisation dimension also falls into two groups. The first encompasses variables that determine the ability to utilize food, notably indicators of access to water and sanitation. The second group focuses on outcomes of poor food utilisation, i.e. nutritional failures of children under five years of age, such as wasting, stunting and underweight.

Based on these indicators and a few other measurement techniques, the FAO has concluded that developing countries have made significant progress in improving food security and nutrition, but that progress has been uneven across both regions and food security dimensions.

Highlighting some of the ways that countries tackle hunger and showing how external events may influence their capacity to deliver on achieving food security and nutrition objectives, the FAO has presented some case studies from different countries.

Bolivia, for example, has created institutions to involve a range of stakeholders, particularly previously marginalized indigenous people. Brazil's Zero Hunger programme, which placed achievement of food security at the centre of the government's agenda, is at the heart of progress that led the country to achieve both the MDG and WFS targets.

Haiti, where more than half the population is chronically undernourished, is still struggling to recover from the effects of the devastating 2010 earthquake. Indonesia has adopted legal frameworks and established institutions to improve food security and nutrition. Madagascar is emerging from a political crisis and is resuming relationships with international development partners aimed at tackling poverty and malnutrition. Malawi has reached the MDG hunger target, thanks to a strong and persistent commitment to boost maize production. However, malnutrition remains a challenge - 50 percent of children under five are stunted and 12.8 percent are underweight.

A key lesson learned from examining the experiences of countries is that hunger, food insecurity and malnutrition are complex problems that cannot be resolved by a single stakeholder or sector. Addressing the immediate and underlying causes of hunger will require a variety of actions across a range of sectors, including agricultural production and productivity, rural development, forestry, fisheries, social protection and trade and markets.

While many of these actions will be at national and local levels, there are also issues of a regional and global nature that require action on a larger scale. Policies and programmes are formulated and implemented in complex social, political, economic and agro-ecological environments.

The State of Food Insecurity in the World 2014