For a few dollars more

Developing countries immunised 80 per cent of their children by 1990 and saved millions of lives. But 35,000 children, under five years of age, still die every day all over the world, because of malnutrition. 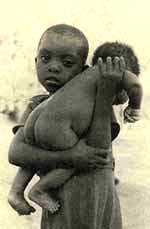 FOR MORE than a decade now, The State of the World's Children, published annually by UNICEF, has attempted to draw public attention to issues which, though vital to the well-being of the world's children, rarely get included in the economic and political priorities of governments. Like its predecessors, The State of the World's Children, 1992, too, is marked by both hope and despair.

The author of the report, believes the last decade of this century still presents an opportunity for a breakthrough on what they call "the last great obscenity -- the needless malnutrition, disease and illiteracy that casts a shadow over the lives and the futures" of the poorest quarter of the world's children.

The report prices the viability of this aspiration at an annual $25 billion -- UNICEF's estimate of the extra resources required for protecting the world's children against major childhood diseases, halving the rate of child malnutrition, bringing clean water and sanitation to all communities and providing every child with basic educational facilities.

However, meeting the needs of the poorest and the least politically influential section of society has "never been a priority with governments". The developing countries spend, on an average, less than 10 per cent of their annual expenditure to meet the basic needs of their people. Of the $40 billion bilateral aid granted by Western nations in 1992, only $6.3 billion were utilised for children. In the same year, people in the donor nations spent $9 billion on sports shoes.

Meanwhile, the widespread assault on children occurs all over the world -- from those starving in Somalia to those shot and left to die in former Yugoslavia. "But no famine, flood or war has claimed the lives of 250,000 kids in a single week as has malnutrition. Every day, in the developing world, 35,000 children under five years of age die of malnutrition."

However, the UNICEF report sees evidence that this neglect may yet change to active concern. For a decade, national health services, UNICEF, the World Health Organisation (WHO) and thousands of individuals and organisations struggled to reach the goal of 80 per cent immunisation in the developing world, a goal that was finally achieved in 1990.

Even those aspects of poverty traditionally considered the most expensive and logistically stubborn -- malnutrition, unhygienic drinking water and lack of basic education -- can now be overcome by a combination of new technologies and community-based strategies. The cost of providing clean water in Africa, for example, has been halved since the mid-1980s to an annual $20 per person. Countries such as Colombia have demonstrated a basic, relevant education can be provided at the same cost. Large-scale trials in India have shown malnutrition cases can be reduced by half for less than $10 a year per child.

These advances underscore the gap between what can be achieved and what is being done. The report recognises that gaps in knowledge and need will not be easily closed either by invisible market forces or visible conventional politics.

The report, while welcoming "market-friendly" economic policies, questions whether these by themselves will ensure that basic needs will be met. It points out that in many industrialised countries as well as developing nations that have enjoyed rapid economic growth, the poorest 20 per cent have not got any of the benefits of growth.

Therefore, the report concludes, "The links between economic reform, growth and the satisfaction of basic needs are anything but automatic." Specific government policies are required not only to promote the right kind of growth, but also to merge this growth into the lives of the disadvantaged.