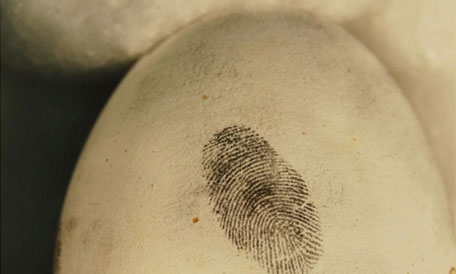 Scottish scientists have made a forensic breakthrough of sorts in the fight against wildlife crime.

Researchers at the Abertay University in the city of Dundee, Scotland have been able to recover fingerprints from the feathers and eggs of birds of prey, using fluorescent fingerprint powders.

The discovery means that police can now establish whether a bird or egg has been handled by a human.

The findings of the research were published in the journal Science and Justice, several media outlets reported on Wednesday.

A report in British daily The Guardian quoted Dennis Gentles, a lecturer in forensic science at Abertay University and lead author of the report as saying, “There are some surfaces where recovering fingerprints remains elusive - human and animal skin, for example. And, until now, feathers were on that list.”

“Now, if the police examine a discarded bird of prey for fingerprints following our guidelines, any fingermarks that have been left there will become visible. If a fingermark shows up, it is proof that the bird has been handled and suggests that it was discarded on someone else’s land as the perpetrator tried to get rid of the carcass. Even if they don’t manage to recover an identifiable fingermark, the presence of the mark means that they know exactly where to focus their attention to swab for DNA and that this particular bird of prey had been handled by a human. So, we hope that this research will help the police in their endeavours to bring those guilty of wildlife crime to justice,” Gentles was quoted as saying in The Guardian report.

Every year, scores of birds of prey around the world are killed after being shot, trapped and poisoned, mainly for their feathers and eggs, in what is a thriving illegal market.