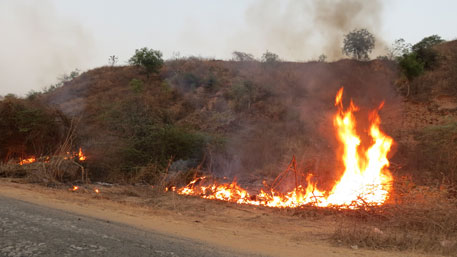 Forest department sources said this did not improve matters and suddenly there were a spate of forest fires, which claimed huge tracts of dense forests. The latest incident was at the Tadoba-Andhari Tiger Reserve that singed 3,000 hectares of forest cover.

According to Mukesh Bhandakkar of Wildlife Protection Society of India (WPSI), these forest fires cannot be natural. “Forest fires break in peak summer when the temperature is very high and coupled with high velocity winds. The current temperature in the area is in the range of 40 to 41°C, this cannot cause forest fires,” Bhandakkar says.

“All the forest fires in the state in recent past have been caused by humans for various reasons. The condition imposed by the forest department for tendu leaf plucking contracts and contractors’ objection to it is the root cause,” says Bandu Dhotre, founder president of Eco Pro, a Chandrapur-based non profit. Dhotre says the fires are set off by people who are not willing to accept the conditions imposed by forest department. According to the conditions, villagers will not be allowed to pluck tendu leaves, they will not be paid the wages and bonus if there is incident of forest fire in more than one hectare land around the forest. “The fire incidents are indication that tendu leaves contractors are daring the government. At times people set fire in the forests because they believe it will improve the quality and quantity of tendu leaves when the existing vegetation is burnt,” Dhotre says.