Forest value to be revised

50 per cent of net present value of forests should go to communities, says report

INDUSTRY and government bodies that need to divert forest for non-forest purpose may soon have to shell out more money, and communities dependent on forests might gain some benefits. The Centre is set to revise the net present value (NPV) of forests. When forest is diverted for non-forest use, the developer pays for compensatory afforestation. In addition, the government charges the developer NPV to compensate the forest’s lost ecosystem services till the afforested area starts providing comparable benefits. At present the government has fixed NPV between Rs 4.38 lakh and Rs 10.43 lakh per hectares (ha), depending on the type and density of forest. In 2008, while approving the amount, the Supreme Court had asked the government to revise the rate of NPV every three years. In November last year, the Union Ministry of Environment and Forests (MoEF) assigned the task to the Indian Institute of Forest Management (IIFM). In its report, IIFM says NPV was grossly underestimated and suggests a hike NPV by 35 to 433 per cent. IIFM’s proposed NPV rate ranges from Rs 9.87 lakh to Rs 55.55 lakh per ha (see ‘Ecosystem services get recognition’). 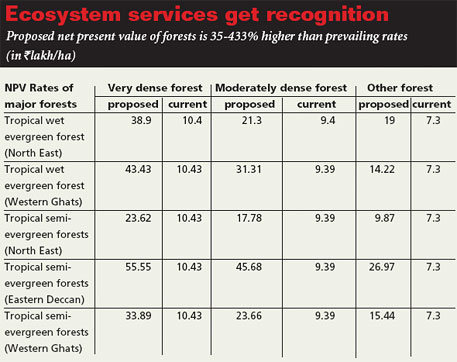 The increase, the report claims, is based on the economic value of many forest goods and services that were not valued earlier. This includes timber, bamboo, non-timber forest produce, fuelwood, fodder, bioprospecting, carbon sequestration, carbon storage, water recharge, soil conservation, water purification, pollination and seed dispersal.

The current NPV is estimated for forests categorised into six eco-classes, or forest types, and three canopy cover density classes—very dense forest, moderately dense forest and open forest. IIFM has categorised forests into 14 forest types and four canopy cover density classes, including scrub forests, and calculated the revised NPV. While the current NPV is calculated by taking 20 years as the rotation period of forest, the revised NPV estimates the rotation period for each unit of classification based on dominant tree species.

The report is not just about revising NPV rate, it also suggests how the fund should be used. For instance, at present the NPV amount goes to the state government, which spends it on forest and wildlife management and developing infrastructure. There is no mechanism to compensate the communities dependent on the forest. “That is why we have suggested decentralisation of fund disbursement,” says Madhu Verma, professor at IIFM and lead author of the report.

Based on estimates of proportion of benefits of all forest goods and services, the study estimates that about 50 per cent of the economic losses of forest diversion occur at the community level. “A number of projects where forest land is proposed to be diverted face local resistance due to the inability of the current mechanism for compensating the loss of livelihoods and other benefits by the project affected people and communities,” the report notes. It thus recommends that 50 per cent of the fund should be allocated for affected communities, 34 per cent should go to the state government and 16 per cent to the Centre’s coffers. It, however, recommends a separate study to figure out the feasibility of this mechanism.

It suggests adding a premium to NPV rates in case of hilly areas and forested wetlands where the ecosystem services of forests are higher. The NPV value should be five and three times higher in case of eco-sensitive zones around national parks and sanctuaries.

The report also recommends charging a “possession value” of land for the forest land in urban and peri-urban areas, in addition to the NPV, based on the market value or the government rate of the land in the vicinity. “While in case of forest diversion the user agency does not get the ownership right, many a times the forest land is gone for ever,” says Verma. Possession value of land will compensate for the loss of land apart from NPV of forest.

The ministry has put up the report on its website for public comments.