Afforestation: money on the trees

The Compensatory Afforestation Fund Act could redefine forest governance. But will it protect the rights of forest dwellers? 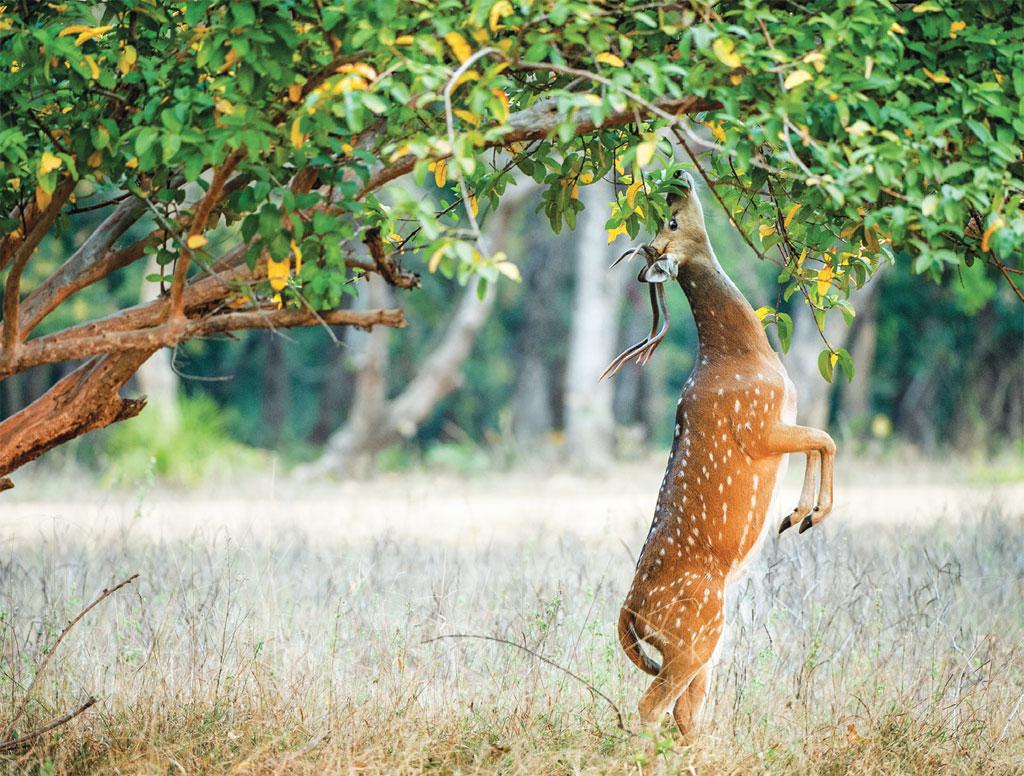 Several landmark developments marked 2016, which could change the fabric of forest governance in the country. While on one hand, Parliament passed the Compensatory Afforestation Fund (caf) Act, 2016, which will unlock Rs 42,000 crore for afforestation programmes, and on the other, there are numerous reports on how provisions of the Forest Rights Act (FRA), 2006, are being diluted taking away the rights of forest dwellers. A shoddy implementation of caf Act can affect millions of indigenous people who depend on the forests for their livelihood.

It is also significant that the Union Ministry of Environment, Forest and Climate Change (MOEFCC) granted forest clearances to 249 projects spreading over an area of about 10,000 hectares (ha) between January and September 2016 (including in-principle and final clearances). With India emerging as a fast developing global economy, competitive demand for land and natural resources is putting immense pressure on forests. Simultaneously, there are growing demands from forest dependent communities for increased autonomy in forest management. In such situation, there are huge expectations from both the Union and state governments to ensure that we see more greenery and lesser conflicts on forestlands.

For the first time, a number of new monetary avenues have opened up for India’s forestry sector. Since the enactment of the Forest (Conservation) Act, 1980, which mandated compensatory afforestation in lieu of diversions of forest areas for non-forestry purposes, a huge amount of money has been accumulating with the government—collected from user agencies to take up compensatory afforestation. But these funds were being managed in an ad hoc manner. Following a direction from the Supreme Court (SC), the Compensatory Afforestation Management and Planning Authority (campa) was created in 2006 to manage these funds. But given the SC’s direction of using only Rs 1,000 crore each year by states as well as huge capacity gaps in state machineries to optimally utilise the afforestation fund, Rs 42,000 crore had accumulated with the government till 2015, rising further by Rs 6,000 crore per year.

The enactment of the caf act will enable the Union government to release this fund to the states and Union territories. However, vital components—such as ensuring the survival of planted stock and defining the role of grassroot forest institutions like the Joint Forest Management Committees (jfmcs), Village Forest Protection and Management Committees (vfpmcs) and Community Forest Resource Management Committees (CFRMCS)—have not been included in the Act. These imperatives have now been left for the upcoming caf Rules, which will be formulated in 2017, as stated by the government. These rules will set the principles of utilising this massive fund.

Not just the caf Act, the forestry sector will now have additional funds through other channels. The 14th Finance Commission has recommended 7.5 per cent weightage to be given to forest cover while deciding central tax share to states. This will mean that states with more forest cover will get more funds as an incentive to protect their forests as well as for giving up economic and development opportunities for conserving them. An estimated R55,000 crore forest-based fiscal transfer is being envisaged, which is more than 24 times the annual budget allocation for the MOEFCC in 2016-17. 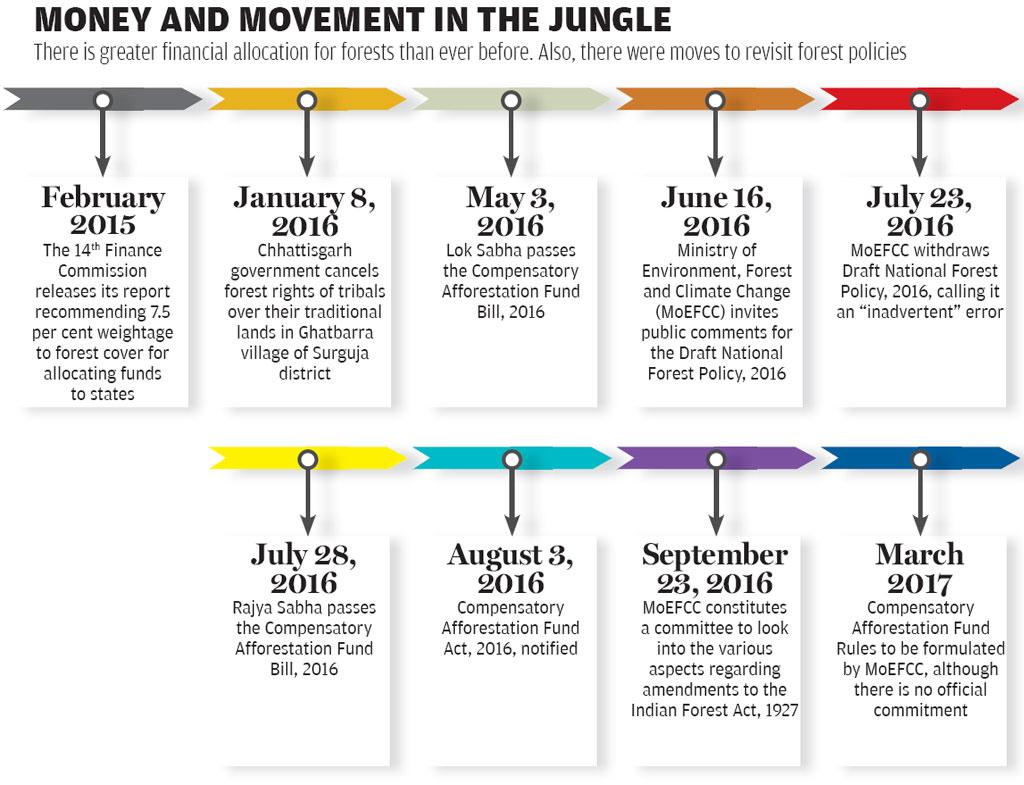 Moreover, the Green India Mission is another untapped opportunity. The Mission has been promised Rs 46,000 crore for increased forest/tree cover on 5 million hectares (ha) of forest/non-forest lands and improved quality of forest cover on another 5 million ha. This is expected to increase forest-based livelihood incomes of about 3 million households. It will also enhance annual carbon dioxide (CO2) sequestration by 50-60 million tonnes by 2020. Operational since 2014, the Mission has already released about Rs 126 crore to seven states. Needless to say, if the Mission’s full fiscal potential is tapped, the forestry sector will not be cash-strapped in the coming years.

India is also sitting on a huge opportunity to raise finance for forests through the UN’s Reducing Emissions from Deforestation and Forest Degradation (REDD+), a mechanism under the international climate change framework in which developing countries would be funded. But this fiscal regime is still in its nascent stage in India. The country is still debating a national policy on REDD+ as there are reports of local communities raising concerns over REDD+ that need to be addressed. It is essential that India adopts a precautionary approach as many REDD+ projects in Africa and Latin America have drawn criticism due to allegations of land grabbing and other problems.

Thus money is no longer a bottleneck to improve the state of India’s forests. What is required is a judicious and accountable utilisation of these funds to regenerate forests as well as to protect the interests of forest-dependent communities whose livelihoods depend on it.

When the United Progressive Alliance (UPA) government enacted the FRA in 2006, it appeared that the historic injustice meted out to indigenous and other traditional forest communities would be undone. However, till September 2016, rights of forest dwelling individuals and communities were recognised on only 4 million ha of forestlands, while the potential is estimated to be at least 40 million ha, which would benefit over 150 million forest dwellers. This is dismal progress, considering that a decade has passed since the enactment of the landmark Act.

What’s more worrying is that many states are diluting various provisions of the FRA to facilitate industrial activity in forestlands. Forest dwellers are already feeling this undercurrent across the country. Under FRA, forests cannot be diverted for any purpose without settling the rights of forest dwellers and the MOEFCC has to get the consent of the Gram Sabha (village council). Activists allege that states are using jfm to enable the forest department (FD) to gain access and manage forest, whereas the FRA makes it clear that the FD has no role in managing forests where rights have been recognised. Today, Madhya Pradesh, Odisha and Maharashtra have framed their own versions of jfm, which are weakening the provisions under FRA and diluting the Community Forest Resource (CFR) rights. For instance, Maharashtra framed the Village Forest Rules in 2014, which ensure the transfer of decision-making powers from the Gram Sabha to the forest officials. Madhya Pradesh and Odisha too framed similar rules, where community rights under FRA were compromised. These rules are a clear subversion of the FRA. For instance, in Ghatbarra village in Sarguja district, Chhattisgarh, forest rights of local people have been cancelled by the state government in complete violation of FRA. 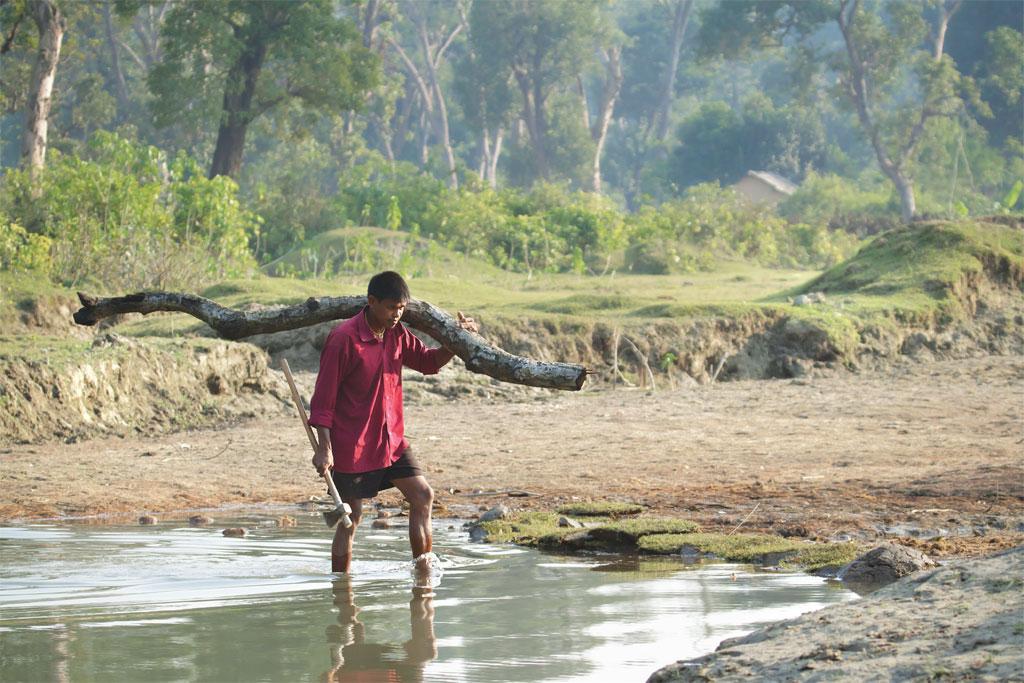 While massive amounts of funds are going to be invested in the forestry sector, there are growing demands to make adequate changes in India’s archaic forest laws. For long, the Indian Forest Act, 1927, has been criticised for prolonging the colonial British forestry management paradigm. There has been a long-standing demand from civil society and the public at large to bring accountability and shifting the responsibility of forest management from the hands of the forest bureaucracy to forest dwellers. The top-heavy forest bureaucracy, which took birth due to this colonial Act, is reluctant to even think about reviewing this 90-year-old law. However, as 2016 ended, there was an indication from the MOEFCC that the government could revisit this act.

The MOEFCC constituted a committee to review its provisions. It remains to be seen how far this committee, which is ironically filled with bureaucrats, will be able to meet the expectations of the forest-dependent people of the country.

There were also moves in 2016 to revisit the National Forest Policy, 1988, which sets the framework and philosophy of forestry in India. The government felt a need to revise this guiding document due to the changing forestry imperatives. However, this move was riddled in a controversy. The Indian Institute of Forest Management (IIFM), Bhopal, which was tasked by the MOEFCC to prepare a policy revision document, submitted its Draft National Forest Policy 2016 in May, 2016. MOEFCC first asked for public comments on the draft policy through an office memorandum on June 16, 2016, but later withdrew it, saying that it was only a “study” and the ministry had not evaluated the draft.

IIFM’s draft policy emphasises good governance, restricting forest diversion, restoring degraded forests, promoting agro-forestry and farm-forestry, valuation of ecosystem services, integration of climate change concerns, community empowerment, ecosystem approach, while highlighting the importance of harmonising with other laws and policies. These are promising departures from past policy. In stark contrast to the existing policy, the draft marks a deviation from “substitution of wood and liberalisation of wood imports” to “promotion of wood use and indigenous manufacturing”. It may not have been the perfect policy, but its withdrawal underscores the fact that the government is reluctant to any change in the governance paradigm, even when the fund channels are overflowing for forests.

The article has been taken from State of India's Environment 2017