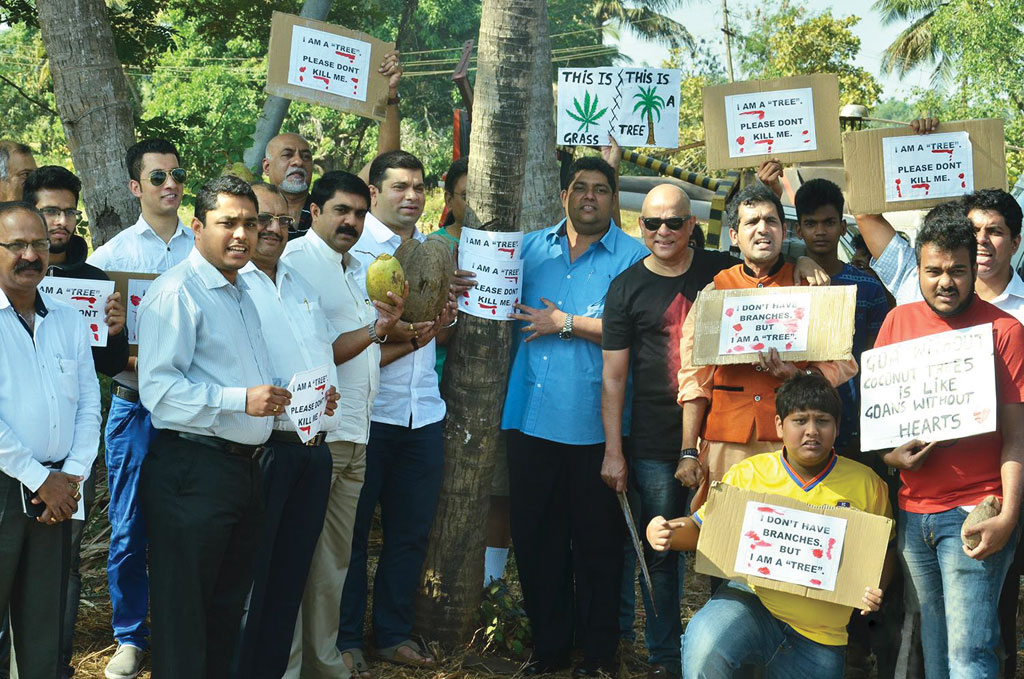 On January 14, a protest was held in Goa against the government decision to derecognise coconut palm as a tree (Courtesy: Goa Forgiving)

In Goa, coconut palm is not a tree anymore. On January 14, the state government passed an amendment to the Goa, Daman and Diu Preservation of Trees Act, 1984, which defined the dimensions of a tree and dropped section 1-A that included the coconut palm as a tree for preservation under the Act.

The move caused a huge controversy. The Opposition, which staged a walk-out in the Assembly when the amendment was being passed, and media reports say that the decision has been taken to facilitate the construction of a distillery unit in Sanguem taluk. The unit is proposed at a plot that has around 500 coconut trees and the project is being supported by the area’s legislator, who belongs to the ruling Bharatiya Janata Party. If the coconut is not considered a tree, no permission is required from the Forest Department to cut it. Residents of the taluk have been protesting against the unit. The coconut palm defines not just the landscape, but also the culture and food of the state, say activists.

Independent members of the state Assembly have found an issue to criticise the government. They have threatened to form a new party for Goa ahead of the Assembly poll next year.

“It is not just to benefit a single project but to fast-track several developmental projects in the state. However, this would also fast-track degradation of the state,” says independent legislator Vijai Sardesai, who has been distributing coconut saplings in his constituency ever since the amendment was passed. “The coconut tree is central to the state and to our identity,” says Sardesai, who has seized the issue to build support for a new regional party.

It all began on December 18, 2015, when the state Cabinet approved a decision to amend the Act and placed the amendment Bill before the Assembly. Even before the amendment was passed, a Chipko-style demonstration was held on January 11 during which protesters hugged coconut trees.

The government, on the other hand, says that the Opposition is unnecessarily politicising the issue. “We are only correcting an error. Even botanically, the coconut palm is not called a tree,” said the state’s environment and forest minister Rajendra Arlekar during an interaction with the media.

The government has justified its decision by saying that the Act has been amended to facilitate felling of trees that are ruined and have become a danger to the public. It also says that coconut was never included as a tree under the original Act in 1984 and was only included through an amendment in 2008 under Congress chief minister Digambar Kamat. This “erroneous” introduction made it difficult for people to get permissions to deal with old and sick trees.

Kamat, however, has refuted the present government’s reasoning. The coconut tree was included in 2008 to prevent felling and to boost production of coconut in the state, which had by then begun importing coconuts from neighbouring states, he said in the Assembly on January 14.

Apart from the increased threat after the amendment, coconut plantations in the state face financial problems as well. Goa has around 25,000 hectares (ha) of coconut plantations (1.32 per cent of the total area of the state) and produces over 124 million coconuts a year. Hit by a fall in production due to Eriophyid mite infestations, low minimum support price (the government gives a minimum support price of Rs 8 per piece), and unavailability of pluckers and toddy tappers, the planters are under constant pressure to sell land to real estate agents or for tourism-related initiatives, says Miguel Braganca, former agricultural officer and executive member of the Botanical Society of Goa.

“Prices have been low for about a decade now. The use of substitutes of coconut oil in soap production and import of processed coconut products (grated coconut, coconut milk and virgin oil) have adversely affected the local coconut economy,” he says.

But still people do not want to fell coconut trees unless it is absolutely necessary. “Nobody cuts a coconut tree unless there is a dire need. People have even gone to court to protect their coconut trees,” says environmentalist Claude Alvares.

Alvares’ non-profit, Goa Foundation, has stopped several real estate development projects that required cutting of trees and were in violation of the Indian Forest Act, 1927, and the Goa, Daman and Diu Preservation of Trees Act, 1984. Several other public interest petitions in the state have also been successful on similar counts.

“Apart from coconut, the amendment will also impact shrubs, hillside wild plants like the kanta (Carissa carandas), hibiscus, and young plants of all varieties (including cashew trees). All of these can now be cut without forest department permissions,” says Braganca.

The government has not acceded to the Opposition’s demand to refer the amendment to a Select Committee for further deliberation. In reply to criticism, Arlekar has proposed to enact special laws to protect coconut. The government, however, has also refused to pass the protection laws before derecognising the coconut palm as a tree.

The Congress party has said that the state government is unravelling all the environment protection laws that were put in place by previous Congress regimes. The 1984 Act was passed by then Congress chief minister Pratapsingh Rane though after much lobbying from environmentalists. Digambar Kamat included the coconut tree under the Act in 2008 to pacify citizens and activists who were agitating against large-scale felling of coconut groves and resettlement of villagers in Bambolim for a gated housing project and a seven star hotel. However, the only certainty in this debate is the threat the coconut tree faces in the state.