On the occasion of World Environment Day, a public meeting of close to 1,000 people from various villages in Kinnaur was held at Ambedkar Bhavan.

Representatives of various villages, activists and senior members of the community addressed the gathering.

“People are tired of the game of political motives being played by different parties and the delays in the implementation of the Forest Rights Act,” says Jiya Lal Negi, president of the Kinnaur Van Adhikar Sangharsh Samiti (KVASS).

A press release issued by the KVASS highlights the fact that though FRA was implemented all over the country in January 2008, including Himachal Pradesh, 2,614 individual and 54 community claims made under the FRA in 2009-10 were rejected by the District Forest Officer (DFO) in 2015.

“The DFO did not take any action on the claims and returned the same to the forest rights committee, without giving any reason,” the release read.

“The Forest Rights Act is a constitutional act that strengthens democracy and recognises people as the custodians of forests,” says R.S Negi, the most veteran leader of Him Lok Jagriti Manch (HLJM). He said it was unfortunate that people had to come out repeatedly on the streets for demanding an Act which was formulated by the Congress-led UPA, the government that is in power in the state.

Before the public meeting and rally, a 'jagriti yatra' or awareness tour was organised last week in several villages to speak about some of these issues and listen to the views of local people. Nako, Purbhani, Powari, Rarang, Jangi were amongst few of the villages visited.

“Climate Change is impacting daily lives of people of this ecologically fragile region and it is time that the government recognises that it cannot continue on the path of unbridled and unregulated construction in such an area,” says Prakash Bhandari, member of Himdhara – Environment Research and Action Collective.

A nine-point memorandum, which was submitted to the Deputy Commissioner, Kinnaur, included key demands: 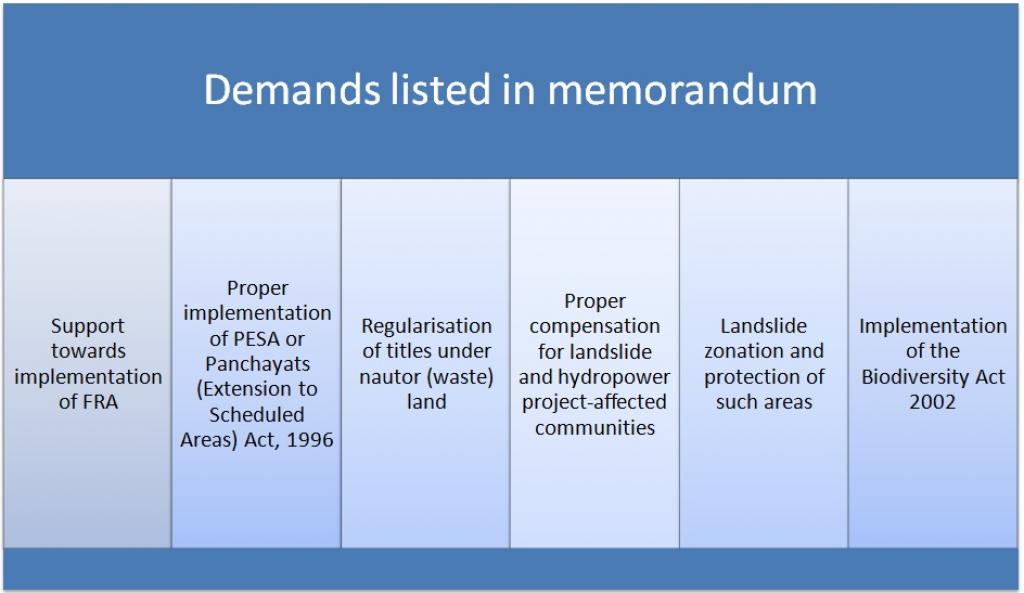