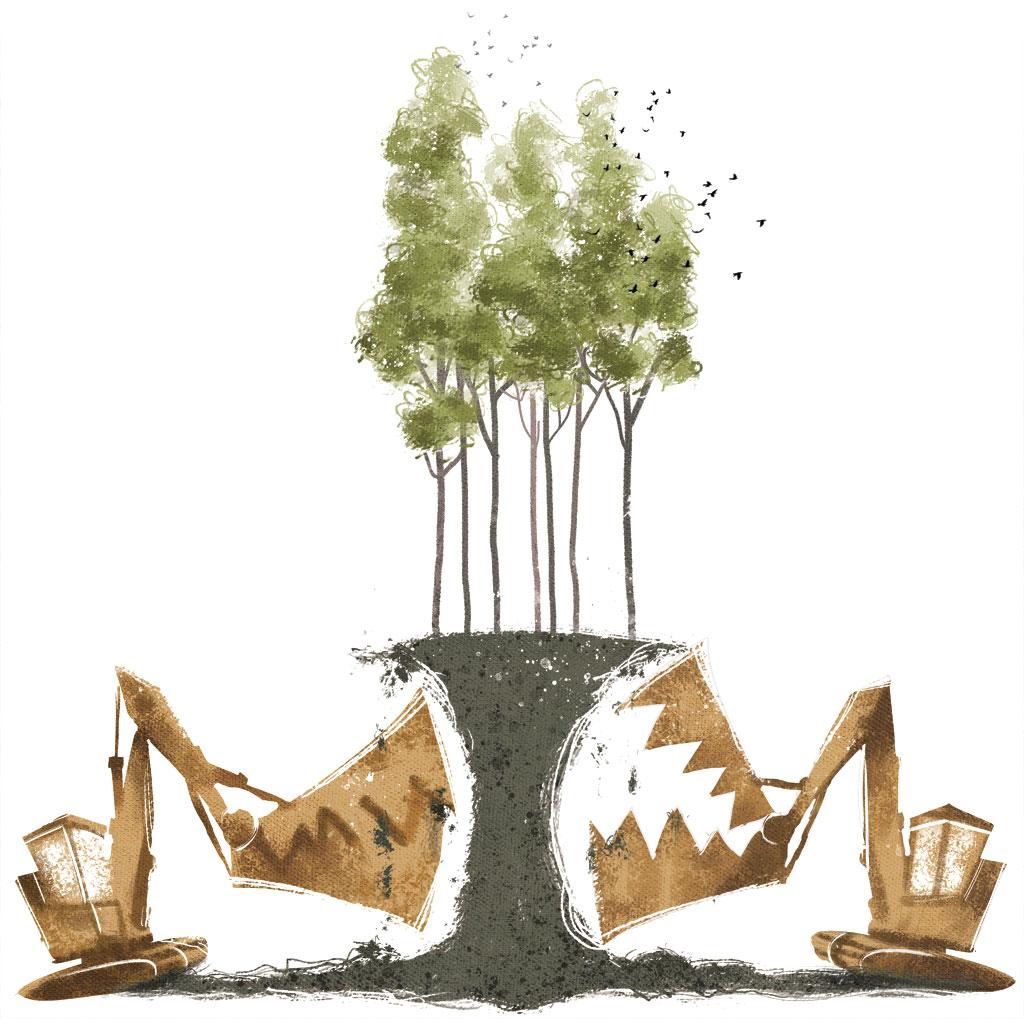 The saranda forests, spread over an area of over 82,000 hectares (ha) in the hilly regions of West Singhbhum district of Jharkhand, were once one of the most pristine regions in India and home to the largest sal forests in the country. Apart from its unique forage plant species, abundant waterbodies, and a magnificent landscape, the region was an important elephant corridor till the early 1990s. Here, the Indian Forest Service used to hold training programmes for its officers, which was later discontinued.

Today, Saranda’s landscape stands brutally mutilated. As the region holds large deposits of high-grade iron ore, indiscriminate mining has disturbed the ecosystem of this fragile region. Saranda forest had more than 300 plant species, which has come down to just 87 species, according to a recent study by the Wildlife Institute of India (WII). The research team also found wide differences in the number of both flora and fauna in the study area in January 2016. The team found only 19 species of mammals belonging to 14 families; earlier research teams had documented over 30 species. The team also found just 116 species of birds, as compared to the 148 species found earlier. Worse, the research team could not document a single sighting of an elephant. The 2010 elephant census sighted 253 elephants.

The fundamental threat to the forests is uncontrolled mining for iron ore, both legal and illegal, which is destroying not just the wildlife but also the forests. According to the forest department, close to 1,200 ha of land within the Saranda forests were given to 85 iron ore mining companies till 2016. But the forest department’s own survey reports indicate that over 11,100 ha of forests have been lost between 1997 and 2003 in the Singhbhum region.

To understand the impact of mining on the biodiversity of Saranda, the Union government appointed a commission of inquiry headed by Justice M B Shah on November 22, 2010. In response to the commission’s report, the Union Ministry of Environment, Forest and Climate Change (MOEF&CC) constituted a multidisciplinary expert committee (MDEC) to assess the carrying capacity of the Saranda division. Both the commission report as well as the MDEC report clearly state that increased mining activity had seriously impacted the biodiversity of the region. The WII’s survey found that even today, there are 10 active mines and 36 closed mines in the study area alone. Worse, there are many mining companies in the queue to get the environmental clearance, which would lead to further degradation.

These mining activities have proved to be a death knell to biodiversity. Elephants, for instance, have abandoned their traditional migration routes due to habitat destruction. Before mining activities began, elephants used to prefer the Karo-Karampada corridor to move into the Saranda forests. Similarly, the Ghatkuri- Santra corridor used to provide free movement to elephant populations in the Gua range of the Saranda Forest Division to the Noamundi range of the Chaibasa Forest Division. The WII study found that elephant movement has stopped due to mining activity in both corridors due to mining and township development in Noamundi.

Further analysis indicates that species prefer less disturbed areas. Sasangda and Koina forest ranges which had low influence of mining, resulted into high species diversity—186 sightings of mammals in Sasangda forest range and 112 sightings in Koina forest range. In contrast, Gua forest range, which has the maximum number of mines, showed very few mammalian sightings. Ditto for avifaunal diversity – sightings at Sasangda and Koina were better—62 and 49 respectively—than Gua, which had a presence of only 18 species of birds. These findings clearly reveal the negative impact of mining on the adjacent biodiversity.

This WII study provides an insight into the unsustainable exploitation of resources and its impact on the surrounding biodiversity. There is an urgent need for legally binding provisions for granting leases for mining in an ecologically fragile area. We must remember that several small mining patches cause more habitat loss than a single large mining area. Mining agencies should be given a single mining site at a time that has an adequate amount of mineral deposit.

There is a need to delineate a “No-Go Area”, on the basis of potential wildlife habitat, where mining activities must be completely banned. This concept was first announced by MOEF&CC in June 2009. As per the classification by the ministry, any non-fragmented forest landscape having gross forest cover of more than 30 per cent and weighted forest cover of more than 10 per cent, must be categorised as a “No-Go Area”. This rule, if implemented, will be the last resort to save and restore the beauty of the Saranda landscape. As suggested by many experts, frontline forest staff must recruited to oversee a conservation transition. Given its present status, Saranda needs be declared as a protected wildlife sanctuary.

(The authors work with the Wildlife Institute of India, Dehradun).

(This story appeared first in the 1-15 December issue of Down To Earth, under the headline 'Drilling to extinction'.)