On the stone slab in Odisha's Goelsukha village, people assert their right over minor forest produce, its collection, use and sale under the Forest Rights Act. Photo: Priya Ranjan Sahu

Immediately after the Supreme Court’s stay on its own order, the Ministry of Tribal Affairs (MoTA), in a meeting with state governments, rolled out an ambitious plan to verify all claims, check if the right procedures have been followed, and incorporate the final list in their affidavits before the next hearing on July 10, 2019. As officials revisit each of the 4.22 million claims and list out the procedures for the 2 million rejected claims, a disorder of a massive scale is unfolding, which involves the legal process of settling claims. Considering that the scheduled tribes and the other traditional forest dwellers stand at the bottom of the economic ladder, the process of claiming rights was made easy, with minimum scope for rejections.

But it has not been easy for millions of forest dwellers, like Charu Singh Rathudiya, 45, of Munja Kheda village in Madhya Pradesh’s Dindori district. Even after filling his claim 11 years ago, in 2008, he is still awaiting his land title. He belongs to the Baiga tribe and lives deep inside the forests. “In 2010, I walked down 40 kilometres to the block office to complain. I was told that my file was lost and was instructed to file the claim again,” he says. He filed the claim again in 2011, yet nothing happened. In 2014, just before the elections, I was asked to file the claim a third time. Officials came and surveyed my land, but nothing happened."

When a forest dweller files a claim for the land title, or patta, it passes through three levels of checks — the gram sabha, the sub divisional level committee (SDLC) and the district level committee (DLC). A highly inclusive body, called the Forest Rights Committee (FRC), is formed by the gram sabha to facilitate the process. This committee comprises 10 to 15 people, two-thirds of them should belong to scheduled tribes and one-third members should be women. The FRA Amended Rules, 2012 gives a list of 14 proofs the claimant can provide to prove occupancy of forest land before December 13, 2005. The evidences include public documents such as Census, maps, satellite imagery and government authorised documents such as voters’ identity card and ration card. Even a statement of a village elder, other than the claimant, can work as proof.

Once the claim is received, FRC does on-ground verification along with the forest department officials. The committee verifies both the individual and community forest right claims. FRC and the gram sabha then hold a meeting to pass a resolution on the claims. The meeting must complete the quorum of 50 per cent, a third of them women. The resolution is then sent to SDLC, which further verifies the claims, and sends it to the DLC. A person acquires the patta, only when it is approved by DLC. Therefore, a claim can be considered rejected only when DLC disapproves it. In fact, even after DLC rejects it, the claimant can move the court. So either granting forest dwellers rights or evicting them can be a long process. But state governments faltered at the February 13 hearing, as no state had data to show the levels at which rejections were made. Odisha, Kerala and Maharashtra are the only states that had level-wise data.

Those who lost their titles

India has around 300 million forest dwellers. But only 4.22 million forest dwellers have filed claims, of which only 1.7 million have been approved. The level at which claims have been rejected decides whether one can be termed “illegal” or “encroacher”. What is interesting to note is that the rejection rate at the DLC, the final signing authority, is very low. For instance, only 2 per cent of the total rejections in Kerala were made by DLC; in Odisha it is 0.2 per cent. So the majority of the rejections have been made at the gram sabha and SDLC levels.

Sundargarh, Odisha’s second-largest district in terms of forest cover and represented by Union Tribal Affairs Minister Jual Oram, has the lowest number of land titles that have been accepted. Five assembly constituencies of the district — Bonai, Talsara, Sundargarh, Biramitrapur and Rajgangpur — are among the lowest performers in the state’s assembly constituencies in terms of granting titles to tribals. In Rajgangpur, represented by veteran Biju Janata Dal leader and former minister Mangala Kisan, only 818 forest-dwelling families have received titles under FRA, the lowest in the state. In most cases, reasons cited for the rejection were that the claimants could not show proof of occupancy on the forest land on or before the cut-off date of December 13, 2005.

But the real reason for the rejection of claims in Sundergarh is not hard to seek. The district is highly industrialised, and has huge reserves of iron ore, coal, manganese, limestone and dolomite. One of the country’s biggest steel plants is at Rourkela, while the district also houses 23 other large-scale industrial units like steel, cement, sponge iron and refractory, besides hundreds of smaller industrial units. Tribal communities Down To Earth spoke to said there has been a continuous effort to snatch away forest land from them and divert it for development projects. “Many industrial and mining projects are on an expansion spree and the government deliberately rejects individual forest rights claims to divert the land for such expansion,” says activist Litu Minz.

Mining is one of the biggest hurdles in FRA implementation. Forests and forest dwelling communities are mostly located in mineral-rich areas. The Ministry of Mines figures show that Odisha, Chhattisgarh, Jharkhand, Rajasthan and Madhya Pradesh have the maximum District Mineral Funds. According to a MoTA data, the rejection rate in most mining-rich states is the highest—Madhya Pradesh with 58 per cent followed by Chhattisgarh with 52 per cent. So state governments are more interested to reserve land for mining or for industrial expansion purposes than to give it to forest dwellers.

In Ghadbarwa village of Sarguja, land was diverted for Parsa East coal block without settling the claims. In fact, in 2015 the entire 820 hectares of the village land that was under Community Forest Rights (CFR) was cancelled. The lush green forest area now has only tree stumps. “The authorities told us that the permission for mining was granted before CFR was given, therefore the cancellation. The gram sabha was not consulted on this. No reimbursement was made for the loss of CFR area,” says Jai Nandan, resident of the village belonging to Gond tribe. The village moved a petition in the high court in 2016. The hearings are on, and so are the mining activities.

There are reasons to believe that FRA violations are taking place at all levels. In 2013, Muma Singh Surjev of Bagdara village in Chhattigarh’s Korba district filed claim for 2.8 hectares. “The forest guard changed it to 12.14 sq m. I have not received anything yet. Whenever I ask for it, I am told that it is being processed.”

In many districts of Chhattisgarh, FRCs are formed at the panchayat level, instead of the gram sabha level. The gram panchayat secretary is the gram sabha secretary as well. This brings the entire process under the panchayat, a body that has been kept out of the process on purpose, given the caste- and class-based divisions within it. “One has to run after the secretary to call a gram sabha meeting for FRA. In most cases, the district commissioner was approached for it,” says Kanta Nandi of Navrachan, a non-profit that works on FRA implementation in Chhattisgarh’s Bilaspur district.

When FRCs are formed at the panchayat level, “the forest-dwelling communities find it difficult to get their voices heard. A Baiga living on top of a mountain walks down for hours to reach the gram sabha, just to be shunned and discriminated,” says Nandi. Some 30 families, who belong to the Baiga tribe and live some distance from Phulwari para village in Bilaspur have never attended a gram sabha meeting. “The gram sabha was constituted at the panchayat level, so their claims could not be passed,” she says, adding that after the non-profit’s intervention, the gram sabha was formed at the village level, and their claims were filed in March 2017. Their claims are pending with the SDLC, but the forest department officials beat up the claimants and lock-up 11 people on charges of encroaching village land, says Nandi. 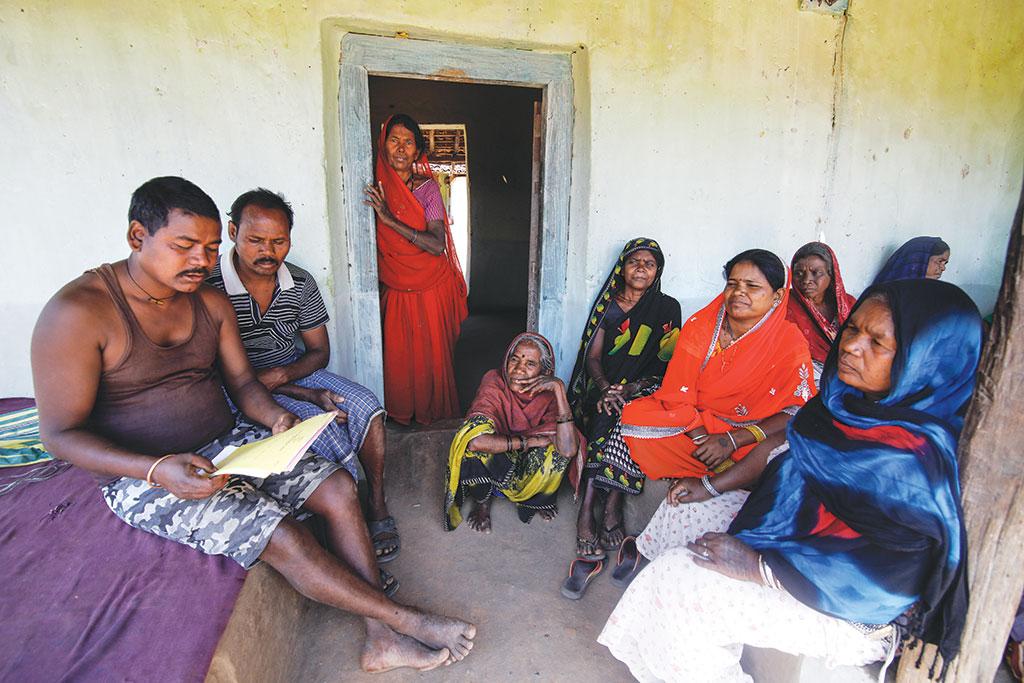 Rejections and the right to appeal

In West Bengal, a clear case of FRA violation is being heard in the high court since 2015. In 2014, the forest and revenue department officials took it upon themselves to survey and verify forest-dwellers’ claims for land rights. FRA clearly gives this authority to the gram sabha along with the FRCs.

In fact, MoTA itself has admitted to these violations. In its letter to the state governments on July 27, 2015, MoTA stated that Gujarat and Chhattisgarh had violated FRA by rejecting claims that did not provide satellite images. The law clearly states that its absence should not be the ground for rejection of claims.

The claims of people belonging to other traditional forest dwellers in Bagdara village of Chhattisgarh were rejected citing lack of proof of 75 years of possession. MoTA had to step in to bring clarity about the law among officials. On April 10, 2015, MoTA wrote to the state governments clarifying that other traditional forest dwellers need to provide only proof of residence for the past 75 years, or for three generations, and not proof of possession. But forest departments have not accepted this distinction.

As recent as in January 2019, the forest department reiterated that other traditional forest dwellers need to give evidence of 75 years of possession. This is a critical reason for the high rate of rejections. “The law gives the claimant the right to appeal against two rejections—by the gram sabha and by the SDLC,” says Geentanjoy Sahu, assistant professor at the Tata Institute of Social Sciences, Mumbai, who is researching on FRA-related issues in Maharashtra. What’s more, FRA itself states that the claimant must be informed of the rejection by the gram sabha, SDLC or DLC, and give the aggrieved at least 90 days to appeal against the decision. “No such petition should be disposed of against the aggrieved person unless he has been given a reasonable opportunity to present his case,” the FRA rules state.