Five years after 20 villages in the district got their Community Forest Rights titles, their Gram Sabhas have developed a draft of their community forest management plans 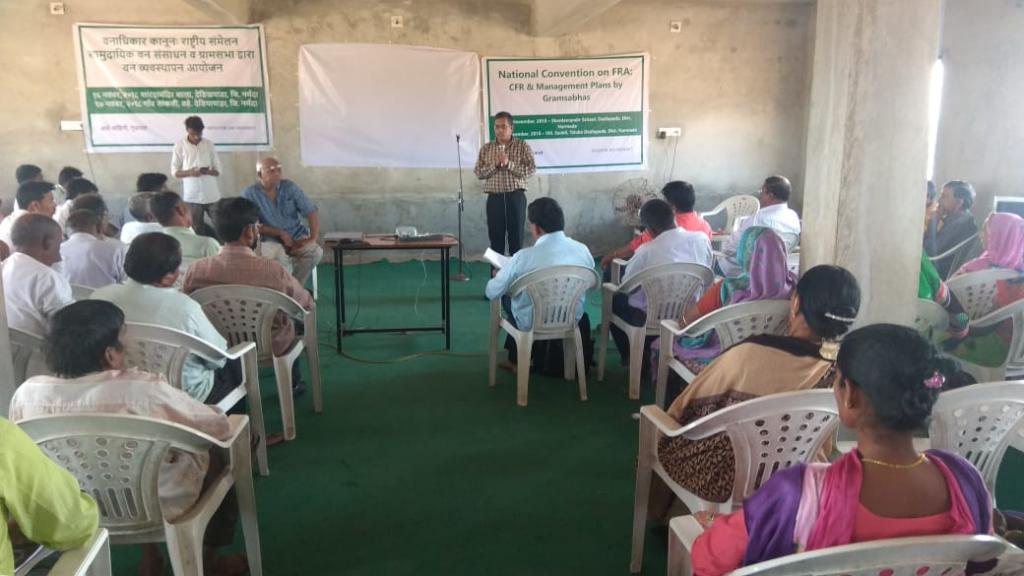 A meeting in progress at one of the villages.

Five years after 20 villages in the Shoolpaneshwar Wildlife Sanctuary of Gujarat’s Narmada district got their Community Forest Rights titles, the Gram Sabhas of these villages have taken a step forward in democratisation of forest governance.

The 20 Gram Sabhas have developed the draft of their community forest management plans for ecological security and livelihood enhancement.

“The management plan is not scientific and prepared by the community using their traditional knowledge. The plan has provisions for natural regeneration of forest land levelled to make agriculture possible. The plan also has sections on development of watersheds. It aims to focus on forest, land and water management,” says Ambrish Mehta of Vadodara-based non-profit ARCH Vahini, facilitating the FRA process in Narmada district.

Section 5 and Rules 4(1)(e) and 4(1)(f) of the FRA give Gram Sabhas (GS) the authority to protect wildlife, forests, biodiversity, catchment areas, water sources, ecologically sensitive areas and habitats of Particularly Vulnerable Tribal Groups. It is also the responsibility of the GS to ensure compliance with decisions taken to regulate access to CFRs and stop any activity which adversely affects wild animals, forests and the biodiversity. GSs are to constitute committees under Rule 4(1)(e) to prepare conservation and management plans for CFRs in order to sustainably and equitably manage CFR areas.

In 2013, the 20 Gram Sabha got CFR titles. Since then, the villages have been able to make Rs. 28 crore from selling bamboo. To ensure that the removal is sustainable, the community only sells dry and dead bamboo.

The villages have also done a biodiversity survey of their CFR areas through inventory to prepare a robust forest management plan.

For making the plan, plotting of areas was done to understand the natural vegetative patterns of their forest. The Gram Sabhas also identified the water source for developing watershed structure by using GPS for judicious use of water for both, drinking and irrigation purposes.

“The plan is not static and not like the plan of the forest department. We have been implementing the plan for two years and making necessary changes to it,” says Rama Ratabhai Vasava, President of CFR Management Committee, Sagai Gram Sabha.

The plan will now be sent to the forest and revenue departments and will be brought up in the Gram Sabhas for adoption in December.