Here's how government is encouraging illegal trade in red sanders 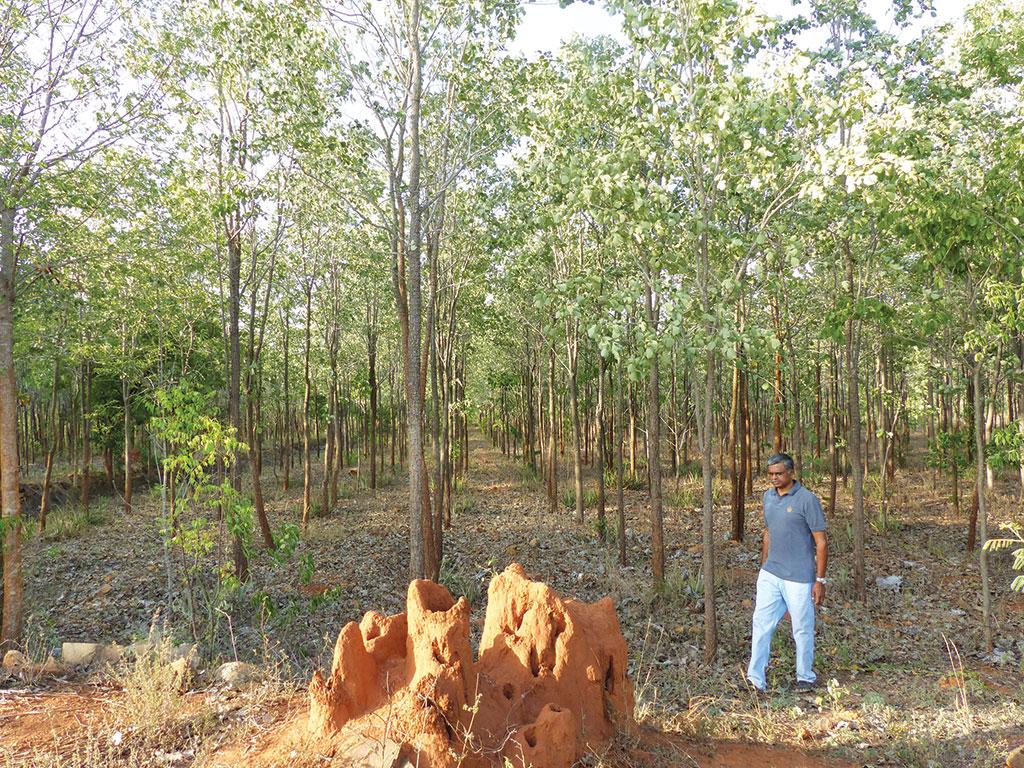 R P Ganeshan has been growing red sanders in 19 hectares in Krishnagiri district in Tamil Nadu (Photo: by special arrangement)

Is it the short-sightedness of the government or a ploy by officials hand-in-glove with the illegal traders, wonders R P Ganeshan standing amid his plantation of red sanders trees spread over 19 hectares (ha) in the Eastern Ghats of Tamil Nadu. For the past two years, this engineer-turned-agriculturist has been trying to find buyers for his standing produce. He had to wait for 20 years for the trees to mature. “But no one is willing to buy them,” he says.

He approached companies like Dabur and Patanjali, but they refused saying there is a lot of red tape involved to get the license. “There are different rules in different states. A company in Kerala wanted certificates from the CITES (Convention on International Trade in Endangered Species of Wild Fauna and Flora),” he says.

The dichotomy of trading in red sanders is intriguing. Though a farmer can grow the tree, he/she would require permits to fell and transport the wood, which is difficult to obtain. Moreover, the price of this wood in the domestic market is less than half of what it is in the international market as demand is low. At the same time, the farmer cannot export it as the foreign trade policy prohibits it. Ironically, the Indian government had itself asked for quotas to export red sanders from CITES as the tree is categorised as a species that needs protection. Now the government sells seized logs from smugglers to private companies for export by granting them a license.

Ganeshan came to know of this when he filed a RTI application. The response he got from the Directorate General of Foreign Trade (DGFT) read: “As per the existing export policy, wood of red sanders in any form, whether raw, processed or unprocessed, is prohibited from export.” Only value added products such as dyes and musical instruments made from red sanders and procured from legal sources are permitted for exports under a restricted category requiring a proper license, it read. Estimates suggest that there are more than 3,000 farmers like Ganeshan across India who are unable to sell their produce.

Red sanders (Pterocarpus santalinus), known for its rich hue and therapeutic properties, is high in demand across Asia, particularly in China and Japan, for use in cosmetics and medicinal products as well as for making furniture, woodcraft and musical instruments. Its popularity can be gauged from the fact that a tonne of red sanders costs anything between Rs 50 lakh to Rs 1 crore in the international market.

Found across the southern Eastern Ghats, the tree is endemic to several districts in Andhra Pradesh and some parts of Tamil Nadu and Karnataka. But overexploitation prompted the Union government in the 1980s to recommend inclusion of red sanders in Appendix II of CITES, which says “trade must be controlled in order to avoid utilisation incompatible with their survival”. “The species was listed in Appendix II of CITES in 1995, and subsequently export of red sanders was prohibited in 2004,” says S K Shanmugasundaram, a retired conservator of forest from Tamil Nadu. “States too regulated the trade of red sanders through a process of multiple permits,” he adds.

In 2010, when the CITES was planning to suspend trade of red sanders obtained from India, the government submitted a Non-Detriment Finding (NDF) report saying it must be allowed to export from cultivated sources. So in 2012, India got an export quota on red sanders from CITES, under which the country could export 310 tonnes of red sanders obtained from “artificially propagated” sources (grown on farms, like in case of Ganeshan) and 11,806 tonnes of wood from seized sources.

The result is while Maharashtra, Karnataka, Telangana, Andhra Pradesh and Tamil Nadu have organised auctions to sell confiscated red sanders, farmers like Ganeshan are barred from exporting their produce. The ultimate beneficiaries of auctions are illegal traders and private companies.

Jaykaran Singh, assistant director, DGFT, explains: “Only seized stocks of red sanders are allowed to be exported, and that too when a notification is issued by the government.” So while quotas regarding seized stocks have been facilitated by DGFT for export, prohibition continues to apply for stocks planted by farmers. While there is a fixed export quota under CITES for red sanders, the Indian government has prohibited export of unprocessed red sanders and does not have a fixed quota for value-added goods made out of red sanders such as extracts, dyes and musical instruments.

It is significant that the NDF report only studied the population of red sanders in the wild and did not include plantations by farmers. “We have asked the Botanical Survey of India to conduct a study on both wild and cultivated red sanders,” says Tarun Prathuliya who is with the Union Ministry of Environment, Forest and Climate Change. As things stand today, farmers are suffering due to the government’s two-faced attitude. “Those unable to sell the wood legally are trying to recover their investment by selling their produce to illegal traders,” adds Shanmugasundaram. Clearly, the government needs to find a way out of this policy quagmire.

(This article was first published in the 1-15th July issue of Down To Earth under the headline 'Log on to red tape').