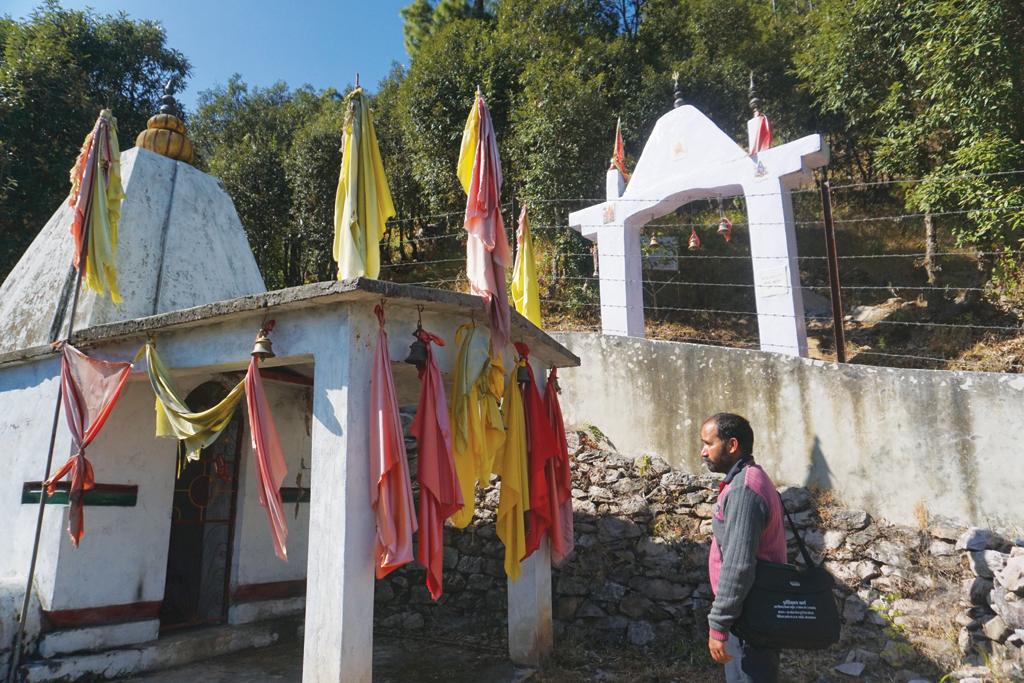 As I climb Hari mountain in Uttarakhand’s Chamoli district, the Hariyali Devi temple atop the peak some 2,850 metres above the sea level comes into view. Those willing to pay obeisance to the goddess, Hariyali Devi can be reached via National Highway-58 from Rudraprayag. The view that greets me is breathtakingly beautiful. Lush forests cover the mountain in stark contrast to the other peaks devoid of vegetation. Though classified as a reserved forest, local people consider it a sacred grove, an enchanted place, ruled by divinity.

In fact, stretching over 5.5 sq km, the green expanse is regarded as one of the largest sacred groves in India. A wide variety of forests, including oak mixed pine forests and broad-leaved forests of Lyonia and Rhododendron, are seen. The herbaceous layer underneath mainly comprises herbs like Thalictrum foliolosum (leafy meadow-rue), Hedychium spicatum (kapur kachri), Geranium walichianum (lal jari), Reinwardtia indica (pyoli) and Swertia chiraita (chiraita), says a study published in the book, Conserving the sacred: for biodiversity management.

But stepping into the forest is forbidden for those who have consumed non-vegetarian food, onion and garlic. I was barred from entering as I had partaken such food. Gathering fuel and fodder is also strictly limited to the fringe area of the grove. For transgressors, dand (punishment) is in store. Local communities believe following these rules pleases the goddess whose temple is located on the mountain peak. So, I choose to visit the three stone structures in the lower region of the Hari mountain. They are dedicated to rather benevolent gods.

Besides the goddess and the three guardian spirits, Hariyali Devi also harbours van devis (forest spirits), who live in trees. Owing to this, felling trees is prohibited in the grove. Only dead trees and fallen branches can be taken outside. Tales narrating the goddess’ magical powers abound. There is a tale about how one Kamal Kant Arora from Chandigarh was brought back to life from the jaws of death as a result of the devi’s blessings. Another story says a local woman fell ill after she felled a tree. The van devi came to her in dreams and asked her to do penance. It is believed that Hariyali Devi protects her devotees in all the 15 villages of Chamoli inhabited by around 6,000 people. According to temple priest Sachidanandan Chamoli, the myth surrounding Hariyali Devi evolved some 400-500 years ago.

Besides the above mentioned res-trictions, women are not allowed inside the grove. Devotees also have to walk barefoot from Kodima village to the main temple, a distance of some nine kilometres. Narendra Chaudhary of Jasoli village, one of the three bordering the grove, says women are not allowed inside to preserve the purity of the deity. Forbidding women serves another purpose too. “Generally, women are the ones, who gather fodder for cattle and wood for fuel, from forests. Restricting their entry ensures it is not disturbed or degraded,” he says. Local ecologist Devraj Chaudhary points out most rules have originated, keeping in mind conservation. Rules per-taining to food and undertaking the journey barefoot help to reduce the number of visitors to the grove.

As a result of strict rules, Hariyali Devi has more biodiversity than any other forest in the area, Chaudhary says. One can find rare trees like kharso (Quercus semecarpifolia) and morinda raga (Abres spectabilis) in abundance here as compared to other areas. Wildlife too abounds in the grove. This has been possible due to community efforts in preserving it.

Hariyali Devi acts as seepage tank for Chamoli. During monsoon, water flows out of the grove in the form of six streams, which takes care of water needs in nearby villages. As local people look after Hariyali Devi, the forest department’s workload has reduced. “For us it’s just a forest. But community participation goes a long way in preserving it,” says Rajev Dheeman, Rudraprayag Divisional Forest Officer. Hariyali Devi is a robust example of how a sacred grove can support an entire ecosystem through faith.