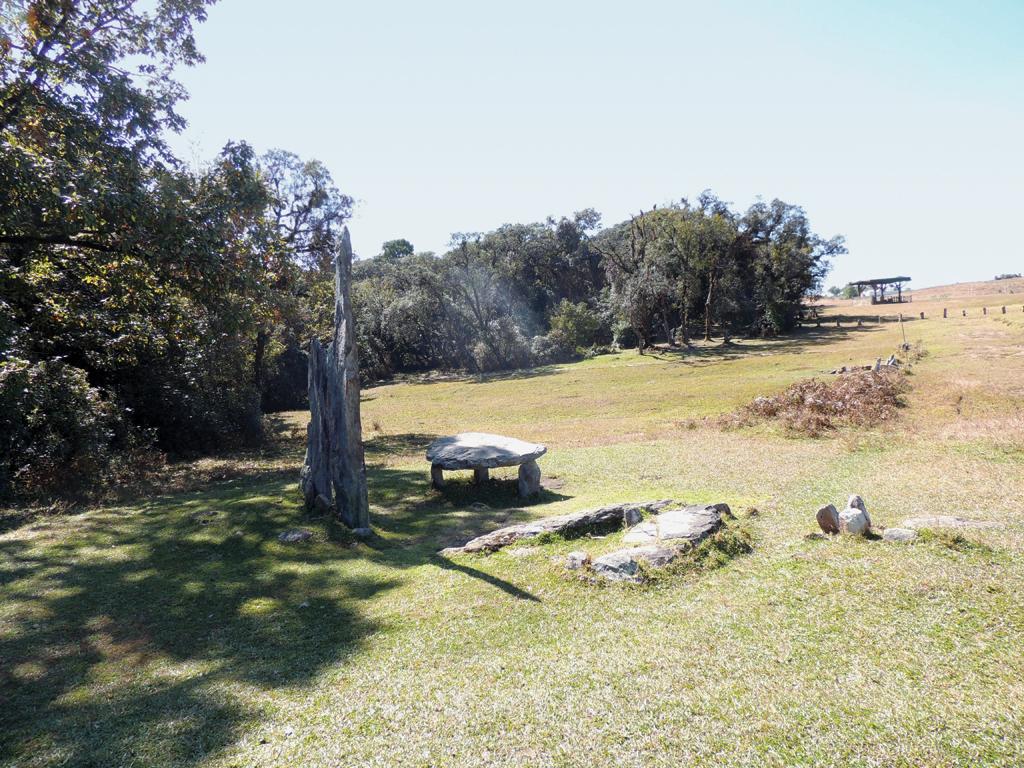 One can clearly hear the symphony of nature here. Hundreds of tiny honeybees buzz through trees, while crickets stridulate a constant tune that becomes one with bushes. Then there are ladybirds gulping down bright red berries and a bat hiding in a tree hollow, away from the bright sunlight that manages to pour through leaves. Combine this with old monoliths covered with moss, and you can be forgiven for thinking that you are in a fairy land—a land where time has stood still.

This is Mawphlang sacred grove, which literally means moss-covered stones. Spanning 77 hectares (ha) at Mawphlang village in the East Khasi Hills, it is one of the largest ancient woods in Meghalaya. One comes upon it suddenly. First, all you can see is a verdant background to a grassy flat meadow. And then, without realising, you find yourself surrounded by trees and gasping in delight! These are no ordinary woods. According to local Khasi beliefs, it is the abode of their deity, Labasa, who protects the clan and the hima (kingdom) from all harm. In fact, they have a saying that: “There can be no hima without a sacred forest and no sacred forest without a hima”.

Several other taboos are also associated with the grove but my guide Sun Lyngdoh asks me to keep in mind two important rules: one, do not take anything away from it, not even a leaf; and two, do not leave anything behind. Even spitting and peeing is inauspicious inside the grove. It’s recommended to visit the toilets built just outside the forest before the tour.

There are a group of monoliths at the entrance—three standing or male stones and one seated female stone. Some 50 years ago, when sacrificial rituals were still taking place inside the forest, the elders would seek permission of the deity at these monoliths. If the deity appeared as leopard, they would proceed with the rituals. But sometimes, they would see the vision of a snake. In that case, the ritual would be cancelled.

I enter the grove through a leafy “doorway”, my ears already attuned to the buzz of bees and the hum of crickets. There is a stony pathway ahead but one can move in any direction. The grove has three parts: Laitdyrkhang is towards the hamlet. This is where the Blah clan, who were the original inhabitants, performed their rituals. Phiephandi is the middle section spread over some 40 ha. The Lyngdoh clan which is the custodian of all sacred groves in the East Khasi Hills, carries out its rituals here. Then there is the Law Nongkynrih on the other side, an extension for the defence of the main forest.

Not so far from the entrance is the preparation ground for rituals. The old stone “long table” is now broken but the stones still remain. At a distance lie stones of smaller lengths where young folks used to wait. Only adult men are allowed to enter the ritual spot. At the heart of Phiephandi, there is a large flat monolith, surrounded by five groups of small monoliths. The large stone is where the king used to stand during the sacrificial rituals and small stones were the sites of sacrifice. The sacrifice inside the forest had always been a red bull. But these days, rituals take place at hamlets and the sacrifice is usually of a cock. 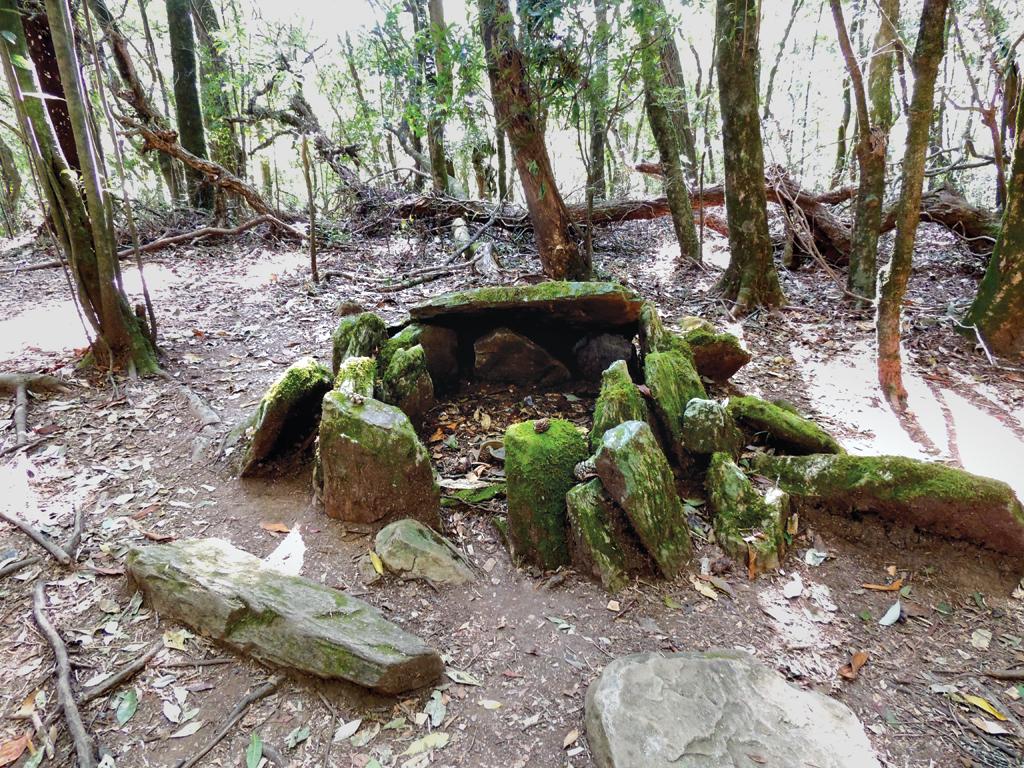 In the meantime, my guide Sun stumbles upon a citrus fruit khasi papeda (Citrus latipes) fallen on the ground. Its leaves are like a double leaf. Sun bites into it, and makes a face; khasi papeda tastes like a very sour orange. Even though one is not allowed to take anything out of the sacred grove, people can freely partake of the fruit inside the forest, making sure that they leave the seed behind. One can even break off a bit of a hive and enjoy the delicious nectar but cannot be greedy and take some home. People can however carry stream water outside to the meadow for picnic. Fallen trees and broken branches lie on the ground undisturbed, adorned with mosses. Rudraksha seeds (Elaeocarpus ganitrus), considered holy by the Hindus, can be seen lying in abundance on the ground.

On my way back, I go past the house of Tambor Lyngdoh, secretary of Mawphlang sacred grove. His house is also the office of Ka Synjuk Ki Hima Arliang Wah Umiam Mawphlang Welfare Society that works on rejuvenation and conservation of environment in the area. He says the grove is a biologist’s paradise. There are trees over 1,000 years old. Although biologists have carried out a number of studies, all of these have been mostly done on site because nothing can be carried outside the grove. The studies show that there are 450 species of plants and herbs, 25 types of orchids, 200 numbers of Himalayan yew (Taxus wallichiana) and English yew (T baccata), 300 Citrus latipes trees. Apart from these, numerous rare plant and animal species flourish inside the sacred grove.

The botanical richness of the woods despite changing Khasi traditions had prompted Sanjeeb Kakoty, professor at the Indian Institute of Management, Shillong, to prepare a film on Mawphlang in the early 1990s. “This is a veritable gene pool and species of orchids and trees, thought to be extinct, have been discovered to be existing here,” says Kakoty, also founder of the North East Data Bank, a syndicate of articles, documentaries and photographs on Northeast India.

Brahmananda Patiri, Deputy Conservator of Forests based in Barpeta, Assam, says since the area falls in the limestone and gypsum belt, the trees do not rise much above 9 metres. Almost all plants here have therapeutic properties. The Taxus species aid in curing breast cancer, pine flowers help in headaches and migraines, the juice of rhododendron trees are used for heart ailments, while the bark of kaphal (Myrica esculenta) is used for stomach ailments and allergies. Since herbs cannot be taken out, the village residents have extended the woods outside the grove periphery, which can be used.

There are several tales of people who have been punished for felling or harming a tree. The deity never fails to protect the forest. Nothing can also be planted inside the sacred grove. So the plants one sees in the grove have survived and grown on their own. While these tales and taboos might have played a role in the conservation of Mawphlang sacred grove, they do not seem to have worked for the conservation of a large number of the 215 sacred groves present across 56 himas in the state. Despite the fact that communities are responsible for management and protection of the groves as per the Khasi wisdom and culture, only 166 are listed with the Khasi Hills Autonomous District Council. Tambor and his associates are now trying to revive the “lost” groves by following the guideline of Khnah Lyngdoh Nonsai who started Mawphlang 500 years ago—by planting three species and maintaining those for three years. It is no use planting 10 million trees with a survival rate of 10 per cent. It’s better to plant a lesser number like 200 or even 20 but making sure that each one survives, says Tambor.