One year of Modi government: review of forests and wildlife

It has been a mixed year for the NDA government on forest governance. Apart from introducing the Compensatory Afforestation Fund Bill, there was no significant departure from the measures of the UPA 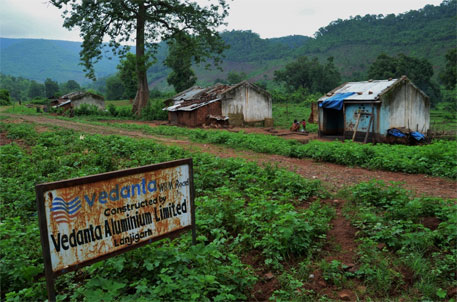 No signficant increase in forest clearance

It was expected that the NDA government would speed up procedures to divert forest areas for various projects, given its electoral promise of unleashing investment. However after a year, data as made available by the Ministry of Environment, Forest and Climate Change (MoEF&CC) show that there is no significant departure in terms of forest clearance granted. In fact, forest land diversion since the government took office until February 2015, has been the lowest as compared to the past five years.

Note: In Parliament on April 28, environment minister Prakash Javadekar said that in 2014, 35,867 ha of forest land were diverted. This diversion pertains to the period from January to December 2014 and includes five months of the UPA government. 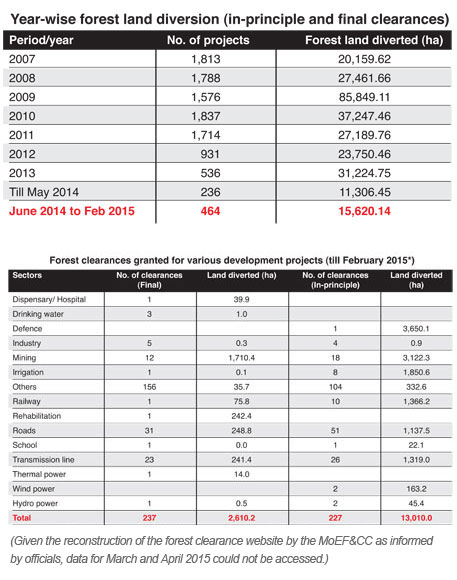 The Forest Rights Act (FRA) enacted by the former UPA government in 2006 recognises tribal community and forest dwellers’ right of settlement and forest management. But even after eight years of its enactment, settlement of rights under the Act is highly contested.

The FRA defines “other traditional forest dwellers” as persons or communities residing in and dependent on forest land for livelihood for at least three generations (one generation spans 25 years) prior to December 13, 2005. But it doesn’t put a time limit on when such lands were recognised as forests.

Thus, the new order limiting the applicability of forests rights for forests recognised post-December 1930 undermines the intent of the law.

Among major controversial issues related to forest governance is compensatory afforestation. The irregularity is two-fold—utilisation of CAMPA (Compensatory Afforestation Fund Management And Planning Authority) funds and the quality of afforestation done.

Compensatory afforestation is controversial because of factors like lack of accountability, poor inspection and monitoring and unavailability of information. In July 2009, the Supreme Court had set a limit of Rs 1,000 crore per year on disbursement of CAMPA funds for the next five years, noting that releasing too much money at one time would lead to irregularity. The fund has Rs 38,000 crore as of now.

On May 8, 2015, towards the end of the Budget session, the government introduced the Compensatory Afforestation Fund Bill. The government wants the law because in the absence of proper institutional mechanism with adequate statutory backup, amount of unspent funds has increased to more than Rs 38,000 crore.

The proposed Bill seeks to provide an institutional mechanism, both at the Centre and in the states, for disbursement of CAMPA funds. If this is implemented well with proper oversight, plan and accountability, it has huge potential to improve the forest cover as well as improve the livelihoods of forest dwellers and forest department communities.

Reconstitution of the National Board of Wildlife

The government on July 22, 2014, reconstituted the National Board of Wildlife (NBWL). However, the choice of members nominated at the time sparked a controversy.

According to the Wildlife Protection Act, 1972, the Union government can nominate five non-profit organisations working in the field of conservation to be part of NBWL. But the government had nominated only one non-profit. Similarly, while the law allows 10 independent wildlife and environment experts to be nominated, only two such members were nominated.

Sources say that after such a board was constituted, in its first meeting on August 12-13 under the new government, NBWL cleared 133 projects, rejecting only one and deferring or sending 26 back. The Supreme Court, in August 2014, questioned the legality of the constitution of NBWL and put all projects that were cleared on hold.

NBWL was reconstituted on September 11, 2014. Four more non-profit organisation members and another eight independent experts were included. The Union environment ministry also made the process of wildlife clearances transparent. It indicated that wildlife clearances would be integrated with forest and environmental clearances on a web portal which is currently under development.