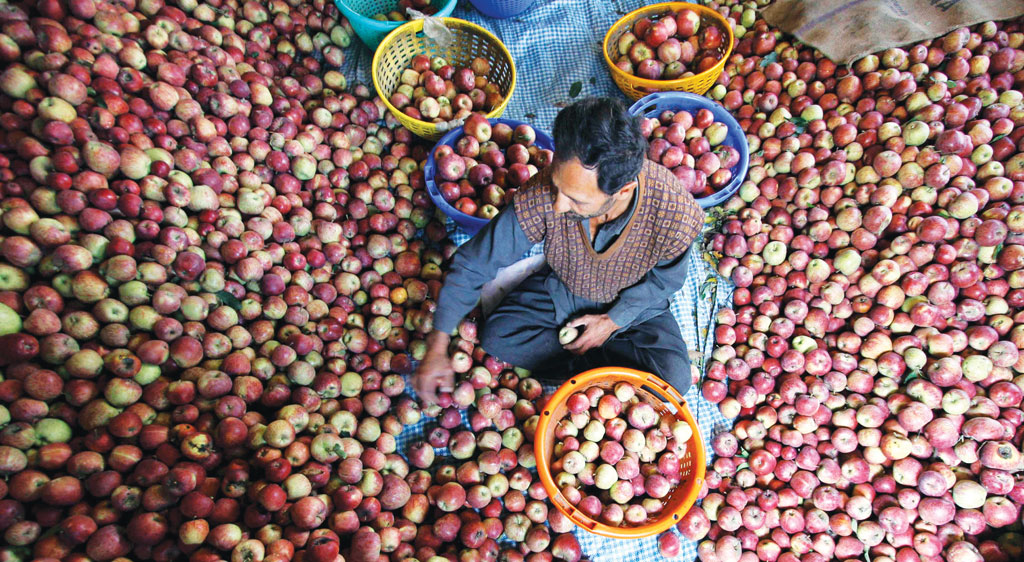 A worker at a store in Shimla's Chaithala village gets ready to sell apples(Photo: Reuters)

The Himachal Pradesh forest depart-ment is in a dilemma. The state high court has ordered it to detroy illegal apple orchards. The department submitted a report to the court on August 6 this year, saying it would auction apple produce from identified encroached lands. But the government appears clueless about managing orchards. The forest department has been presenting a status report to the court every once in a while on the identi-fication of encroached forests and the action it has taken so far.

Trouble for the encroachers started early this year when a resident of Chaithala village in Shimla’s Kotkhai tehsil filed a complaint at the Himachal Pradesh High Court that apple growers had encroached upon 40 hectares (ha) of forestland in upper Shimla. He stated in his complaint that the encroachers were reaping profits by uprooting thick deodar trees and cultivating apple plantations. Most of the encroachers were influential people with political connections, he alleged.

On April 6, the Himachal Pradesh High Court directed the state forest department to clear the encroached land and strictly prohibited new plantations. The court order said that water and electricity connection to the makeshift residential structures on the encroached land must be disconnected and all standing apple crops be destroyed at the cost of encroachers. It also made the forest department responsible for plucking and selling the apples and pruning the trees after harvest.

Intruders in the apple bowl

While encroachments have been going on in the state for the past six decades, it had increased significantly since the 1980s. “The encroachers would get their labourers to chop the standing trees, burn the grass on forestland and prepare it for raising an orchard. They continued planting trees while the authorities turned a blind eye to it all these years,” says Baldev Singh, an orchard owner in upper Shimla.

Guman Singh, convenor of Himalaya Niti Abhiyan, a grassroots organisation, agrees. “Since the land is scarce for cultivation due to the hilly nature of the terrain, the traditional modes of farming did not differentiate between forests and farms, so naturally there are a large number of so-called encroachments,” he says. 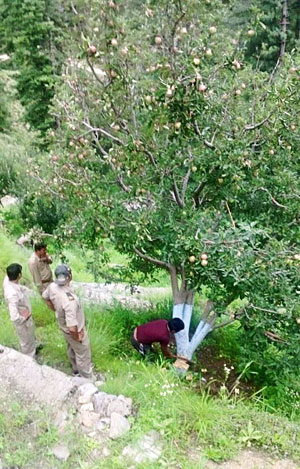 Apple in Himachal Pradesh is primarily grown in Shimla, Kinnaur, Kullu and some parts of Mandi districts. In Shimla, the key producing areas are the Theog-Kotkhai-Jubbal Rohru belt and the Narkanda-Kotgarh belt. Shimla has seen maximum encroachment—4,900 cases involving less than 0.8 ha and 1,079 cases involving more than 0.8 ha. According to government data, as quoted in media reports, 16,000 cases of encroachment were identified across the state from April to July this year. This involved 54,400 ha of forestlands. Not much action has been taken against encroachers in the apple-growing areas of Kullu.

The Forest Rights Act (FRA), 2006, has complicated the matter in Kinnaur, where almost the entire population belongs to the category of Scheduled Tribes. According to FRA, no member of a forest-dwelling Scheduled Tribe or other traditional forest dweller shall be evicted or removed from forestland under his/her occupation till the verification procedure is complete. But the government is still in the process of identifying the beneficiaries of FRA, says Angel Chauhan, divisional forest officer (DFO), Kinnaur. Without knowing who are the rightful owners of the forestlands, there is little scope of deciding encroachment and hence, there has been no eviction in the district yet, Chauhan adds.

Encroachment of forestland has been politicised by various governments over the years. There were two failed attempts to regularise these encroachments (see ‘Bitter slices’). The last attempt was made in 2002 by the Bharatiya Janata Party government. It asked the encroachers to submit affidavits on how much land they had encroached so that it could decide how much of it could be regularised. The list had 160,000 applicants. The government’s agenda remained unfulfilled as it was thrown out of power in 2002.

In the years that followed, there was hardly any change. Successive governments turned a blind eye to the large-scale encroachments of forestlands that continued unabated. There were no protests or activism.

The basis of the classification is the legal process. For those who have encroached on more than 0.8 ha, challans are filed in the normal court after registration of FIR, while for those who have encroached on less than 0.8 ha the matter is sorted in the office of DFO. The procedure for the former is a long one and decision has been taken to expedite action against them,” says Alok Nagar, conservator of forests, Shimla. He adds that the government has auctioned the produce of the encroached areas identified so far. But officials allege that in many cases the encroachers themselves have tried to purchase the auctioned apples.

In July this year, the government constituted a committee under the financial commissioner (revenue) to take a holistic view of the situation and suggest appropriate policy measures that would address the concerns of the poor forest dwellers. Meanwhile, with the illegal orchards likely to be destroyed or becoming redundant soon, there is a scamper among apple growers to procure legal orchards or land fit for apple cultivation in Shimla and Kullu districts. The non-encroachers are also expecting appreciation of costs of their orchards.

Kulbhushan Upmanyu, an activist, says that apple trees standing on encroached land should not be destroyed. “Instead, the illegal orchards should be declared community forests and the proceeds should go to the community,” he suggests.