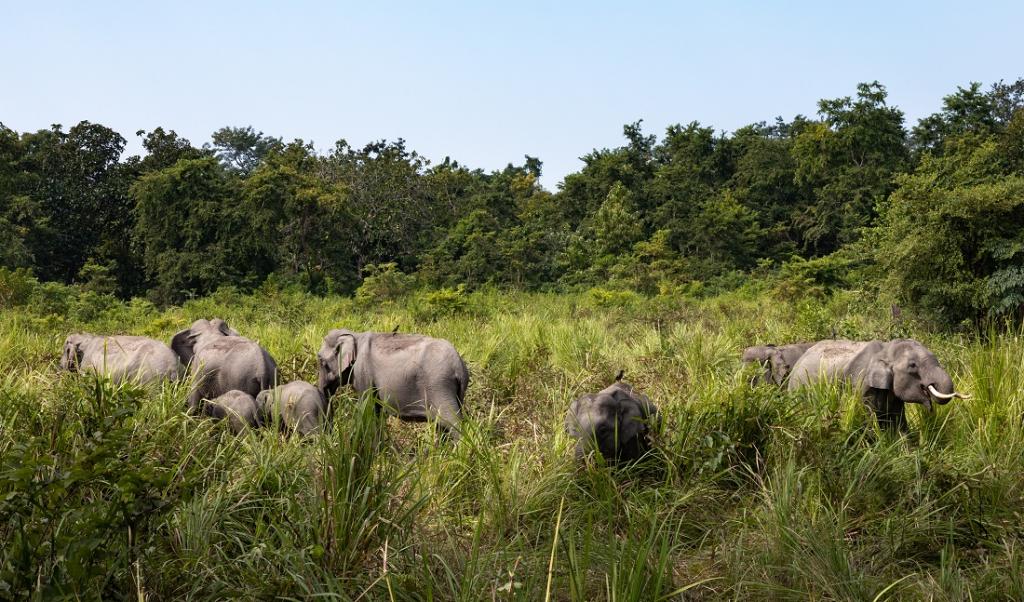 Preserving forest cover on private land can aid elephants to travel between habitats, in turn, helping to conserve their increasingly isolated populations, the paper  added.

The aim of the study was to identify important connectivity areas for the endangered Asian elephant across a 21,000 sq km of Northeast India using empirical data and recently developed animal movement models.

Connectivity is increasingly important for landscape-scale conservation programmes. But there are obstacles to developing reliable connectivity maps, including paucity of data on animal use of the non-habitat matrix.

Connectivity is critical for the Asian elephant, India’s Natural Heritage Animal. They range widely, sometimes over the space of hundreds of kilometres, to meet their immense food and water requirements.

This is particularly true in the fragmented landscapes of the tropics. The average size of protected areas in India, for instance, is less than 300 sq km. This is comparable to the average home range of a single elephant herd.

We are talking about a 20,000 sq km region. Across such a large area, identifying the areas that are most critical for connectivity can be very useful.

Vasudev, a senior scientist and connectivity expert at Conservation Initiatives, a Northeast India-based non-profit, added that connectivity conservation was also important for other species.

Identification of corridors for the Asian elephant can potentially aid the movement of other animals, such as tigers or hog deer, as well, she added.

Complete knowledge about where elephants moved is not available, Vasudev said. Evidence-based demarcation of elephant corridors, or assessments of what limited their movement are also not always available.

The study provides such an assessment, with scope to continuously refine our knowledge and maps, as the situation changes on-ground, or as we learn more about elephant movement, or even as we expand our area of interest (like expand to include other landscapes).

Vasudev, Varun R Goswami and other scientists at Conservation Initiatives used reports of elephant use outside protected areas.

These reports have been systematically collected from people who resided in these landscapes. The scientists incorporated these data into newly developed connectivity models, called Randomised Shortest Path (RSP) models.

“We asked villagers about elephant presence in their immediate neighbourhood over the past year and recorded this information. We also asked if they had faced human-elephant conflict, in the form of crop loss, or human injury or death,” Vasudev said.

The RSP models are an improvement on previous ones, she added. Earlier models had assumed that animals chose optimal movement paths based on complete knowledge of the landscape.

Others took the line that animals had limited knowledge of their landscape and moved randomly. “This novel model balances these two extremes and is better able to mimic animal behaviour in a realistic manner,” Vasudev said.

The research done by Vasudev and her colleagues have a number of firsts to it, according to her. It is the first time that RSP models — a very new advancement in the field of wildlife connectivity — has been applied in India.

It is also the first time globally that citizen science data, that are relatively more feasible to collect, have been used with RSP connectivity models, Vasudev claimed.

“This opens up opportunities for applying advanced connectivity models for species or landscapes otherwise limited by lack of appropriate data,” she said.

He emphasised the need to identify animal corridors and ensure that wildlife connectivity was maintained in the face of ongoing environmental and land-use change.

“Increasingly, we are realising that it is not just important to identify where animals move, but also why they are restricted to moving through certain areas and not through others,” Goswami said.

This finding adds to the authors’ previous research that vegetation and wooded areas even on private lands, can facilitate critical animal movement.

“Whether we are talking about small-scale movement, or regional connectivity across tens or even hundreds of kilometres, adding vegetation cover to private lands aids connectivity,” Goswami said.

This finding provides data-based evidence for policies that encourage the preservation of wooded areas on private lands. It also strongly emphasises the need to conserve remaining forests and avoid further forest loss.

The authors recommended that places important for connectivity of elephants should be considered while planning construction of roads or railways.

Important connectivity areas should either be avoided, they said. Alternatively, mitigation measures should be incorporated into linear infrastructure like roads to ensure there is no impediment to elephant connectivity.

Another recommendation is to limit forest loss, especially in areas where forests serve as movement corridors for animals.

Only species presence is considered in environmental impact assessments. There may be forests that don’t have elephants, but are valuable corridors. Such forests must be conserved or accorded protection, according to the authors.

A third suggestion is to encourage and incentivise woodland development or vegetation cover on private lands. Bamboo on private lands, or wooded areas in tea estates can serve to promote elephant movement, the authors said.

The study is titled Identifying important connectivity areas for the wide‐ranging Asian elephant across conservation landscapes of Northeast India.

It was published in the peer-reviewed scientific journal Diversity and Distributions last month.