In the mineral-rich Niyamgiri, which is considered sacred by the Paraja tribe, not even one sacred grove was identified by the state government (Photo: Sayantan Bera)

Recently the Odisha government began implementing a programme to protect sacred groves in the state. These miniature patches of forestland or waterbodies, brimming with biodiversity, are traditionally dedicated to deities that are worshipped by tribal communities. Under the restoration programme, the state government identified 2,163 groves in the tribal heartland of the state as well as some non-tribal districts. During the first phase in 2013, Rs 1 lakh was earmarked for 500 of those sacred groves, where a plantation drive was launched—100 seedlings around each grove. The state government also plans to build a restshed and provide a water source at each grove in the second phase. The project is expected to be completed by 2017-18.

Tribal communities across the state are opposing what the government claims is a noble intention. The bone of contention between the government and the state’s tribal population is primarily on two main points. One, they say that the omission of prominent sacred groves in mining-rich areas such as Niyamgiri, Khandadhar and Baphlimali hills have not found mention in the list. In all these areas tribal communities are protesting against mining by private companies. In 2013, local communities rejected consent for Vedanta’s mining project after the Supreme Court recognised the religious rights of the tribal population over Niyamgiri, considered sacred by the Paraja tribe. But the state government has not identified even one sacred grove in the area. Moreover, no attempt has been made to map the groves throughout the state.

Prabhananda Sisa, a resident of Sidipaka village in Malakanagiri district, who belongs to the Paraja tribe, explains the second point: “We would have respected the move if the interventions did not cross the village boundary. The officials have no idea which tree varieties are grown here, and worshiped by us. They have little understanding of the unwritten rules of the forests. Conservation of groves should be best left in the hands of the local community.” The forest department, which is currently preparing a detail management plan, is reportedly moving forward with a one-size-fits-all approach. But this is unlikely to work. Other tribal residents say it is an infringement of their sacred space.

“It seems the forest department has failed to distinguish between shrines and sacred groves. Provision of Rs 1 lakh for each grove seems like a religious donation, and worse, only a few sacred groves have been identified,” says Mihir Jena, a researcher working on grove conservation in Koraput district.

Sacred groves are an integral way of life for the 9.6 million tribal people in Odisha. Such is their sanctity for the groves that they prohibit human interference, especially of outsiders, fearing that any kind of disturbance in the area might offend the presiding gods, leading to deaths, diseases or calamities. Sisa says that the forest department has incorporated churches and many temples of Lord Shiva and Parvati in the list of sacred groves. “The government should restrict its developmental activities to building schools and community halls in villages or providing other basic infrastructure,” Sisa adds.

The government has also not clarified on the grove area that it intends to protect. The area of sacred groves varies from less than 10 sq m to three hectares (ha), but most groves are less than one ha in size.

Some of the chosen groves are as small as 7 sq m—the average size of a kitchen in a lower middle-class family. So motivating village people to give their consent to the plan will not be a cakewalk, especially when the work involves government officials venturing into forests that are out of bounds, and are protected fiercely by the local communities.

The government has not recognised the strong emotional and spiritual connect the sacred groves have with local communities. “A lakh of rupees holds little value to tribal communities compared to their age-old traditions intertwined around sacred groves,” says Hemant Kumar Sahoo, a Bhubaneswar-based researcher. 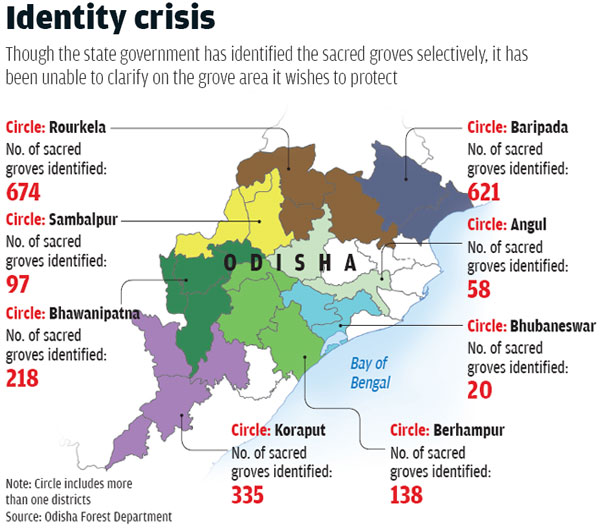 Tribal communities, who are the most important stakeholders of sacred groves, were not consulted by the government on the programme. All interventions are being planned through committees of the Joint Forest Management (JFM) programme. The committee will decide on how the Rs 1 lakh grant is spent. “Selecting a few villagers might infuse bad blood in the community. It could lead to the withdrawal of community support; protection of sacred groves may be left to these committees. If that happens, it will spell doom for the groves,” says Y Giri Rao, director of Vasundhara, a Bhubaneswar-based research group on working on natural resources.

The state government implemented this programme after admitting that green cover surrounding the sacred groves had been decreasing. Although there has been no survey to establish this, forest department officials say that the forests around the groves are losing density and needs intervention. “If the government really wants to do something to save these groves, the Forest Rights Act, 2006, provides the perfect opportunity. Sacred groves can be left to tribals with the recognition of community forest rights,” says Sahoo.

The state government could also take a leaf out of the Odisha Forestry Sector Development Programme (OFSDP), in which Rs 50,000 to conserve each of the 138 identified groves. OFSDP has four major components: GPS demarcation and mapping of groves, biodiversity study, planned limited intervention, and an inventive grant towards protection and maintenance of the grove and its biodiversity.

Forest officials, who are aware of the inherent shortcomings of the project, are themselves apprehensive of the project’s success. They have refused to be quoted.

They also hinted that the government is considering the programme afresh.

Meanwhile, the tribal people helplessly wait on the dark side of the timeless relationship between the State and religion, sacred groves in this case. How the Odisha government will deliver its ‘gift’ or ‘donation’ remains, maybe, even beyond God’s imagination.