Uprooted for the sake of compensatory afforestation

In Thaggon village many are set to lose their traditionally-held land due to compensatory afforestation for land diversion of Hasdeo Arand forest. Ratan Tirki, a tribal, with his FRA title. Photo: Ishan Kukreti

Residents of Khadgawan development block of Chhattisgarh’s Korea district have been perturbed over the government-sponsored land grab for Compensatory Afforestation (CA).

On January 15, 2019, the Forest Advisory Committee of the Ministry of Environment, Forest and Climate Change (MoEF&CC) gave the Stage I, in-principle approval to divert around 800 hectares (ha) of forest land for mining the Parsa coal block in Hasdeo Arand forest area, in Surguja and Surajpur districts of Chhattisgarh .

The approval comes at the cost of land rights of the forest dwellers in Hasdeo, and it threatens their disenfranchisement in Korea too.

CA will have to be undertaken before the Stage II clearance is granted. Fears of marganalisation associated with coal mining in Hasdeo have now creeped into Khadgawan, located some 160 kilometres away from the forest.

While on one hand the idea behind CA misses the point that plantations aren't forests; on the other, it continues the colonial idea that forest departments are de-facto owners of forest land and forest dwellers mere squatters, who need to be pushed out. The people of Korea are facing the brunt of these two malignant forces.

Although the District Collector gave a clean chit to CA, stating in his letter that no land claims under Forest Rights Act (FRA) 2006 are pending in the area; when Down to Earth visited the 16 villages, the reality was diagonally opposite.

In Dhanpur village, people sit solemnly, discussing the CA, or Parsa coal plantations. Of the village’s entire area of 480 ha, around 25 per cent (123 ha) has been earmarked for CA.

Rights under FRA have not been settled yet. Of the 150 claims filed for Individual Forest Rights (IFR), only 15 have been approved. The pending claims are lying at the panchayat office, according to Chhote Lal Singh, a Gond tribal resident of the village and secretary of the Forest Rights Committee — a body comprised of gram sabha members responsible for collecting and filing land claims under FRA.

“We have cleared the forms from our end, but the sub-divisional magistrate (SDM) says the block development officer has to take the forms, but he says that it’s the responsibility of the SDM,” added Singh. The SDM could not be contacted. 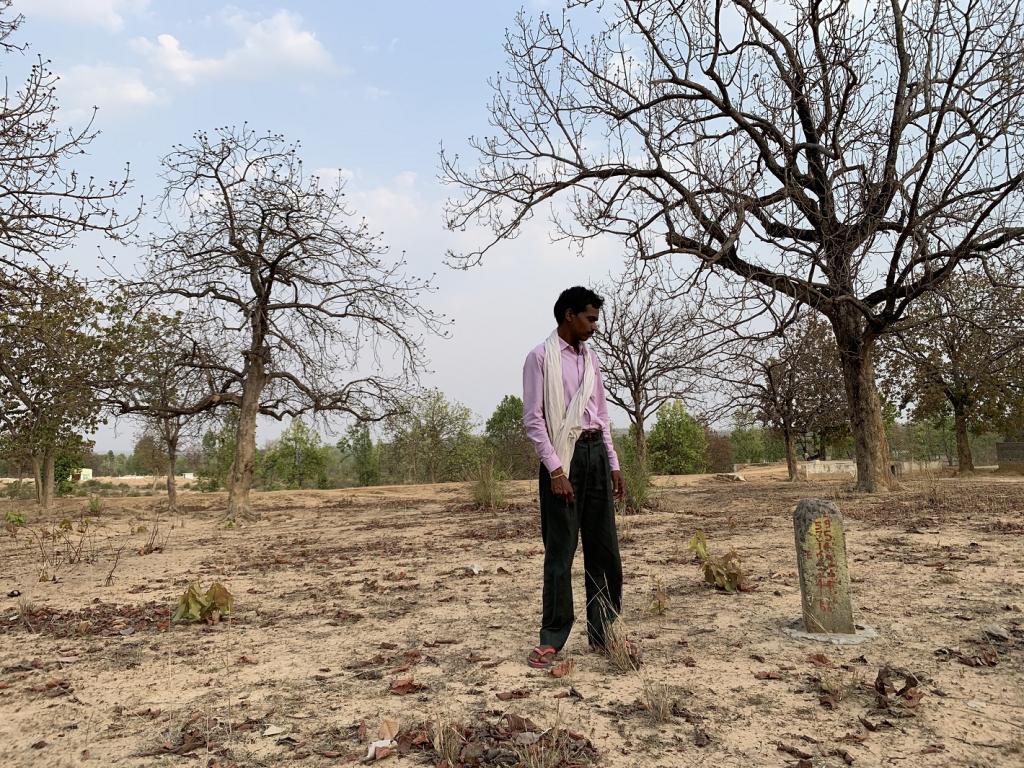 It is on these lands, where FRA claims are pending, that land survey for CA was done in 2016 and cement pillars identifying the land for CA have emerged. The villagers had no idea why the survey was conducted.

“They just appeared one day in October 2016 and started looking at our land through cameras. We didn’t know what they were doing,” said Kshetra Pal Singh, sarpanch of Chopan panchayat.

In fact, gram sabhas weren't consulted in any of the villages where CA is being undertaken. Around 30 ha of Chopan’s total area of 189 ha has been earmarked for plantation.

Korea, comprising around 46 per cent Schedule Tribe (ST) population, is a Fifth Schedule area. It comes under the Panchayat Extension to Scheduled Areas (PESA) Act, 1996 — which mandates that for any developmental work, the gram sabha has to be consulted.

In Mugum, panchayat sarpanch Pinap Singh wonders how the CA will be undertaken when it wasn't approved in the gram sabha. The village is spread across 969 ha, of which around 26 per cent has been identified for CA.

While the villagers can speak and understand Hindi, the surveying team talked to them in English — another vestige of colonial legacy that the people cannot relate to. Just like in Dhanpur, most of the 200-odd FRA claims in Mugum are lying at the panchayat office.

The story is the same — while the government hasn't cleared the claims, it has conveniently approved the land to be planted over and turned into a Protected Forest, under the provisions of the Compensatory Afforestation Fund (CAF) Act, 2016.

In another village, Thaggon, the situation is even worse. Areas, recognised as IFR land under FRA, have been marked as plantation sites. In Bahalpur ward of Thuggon, khasra number 570, the IFR land of Ratan Tirki is in the government’s list of khasra numbers slated for CA.

Tirki, a tribal, owned around seven acres of forest land, which he and his family have been using for cultivation since they came to the region 40 years ago from neighbouring Sarguja district.

Back then, the forest department needed them to work as firefighters. Tirki is still a part of the Van Suraksha Samiti, from which he earns around Rs 3,000 every month.

Initially, they were cultivating more land, but in the 1990s forest officials asked them to leave out a chunk of around two acres for the purpose of plantation.

The teak plantation still stands behind his house, barely growing. “In 2007 I got around four acres under FRA, and now they are taking that away too. I have worked so hard on this land, prepared the soil, kept away animals... and now they’ll take it back? Why do they always keep displacing the poor?” asked Triki.

The land that is going to be planted over and cordoned off was the primary source of subsistence for the residents of Khadgawan. 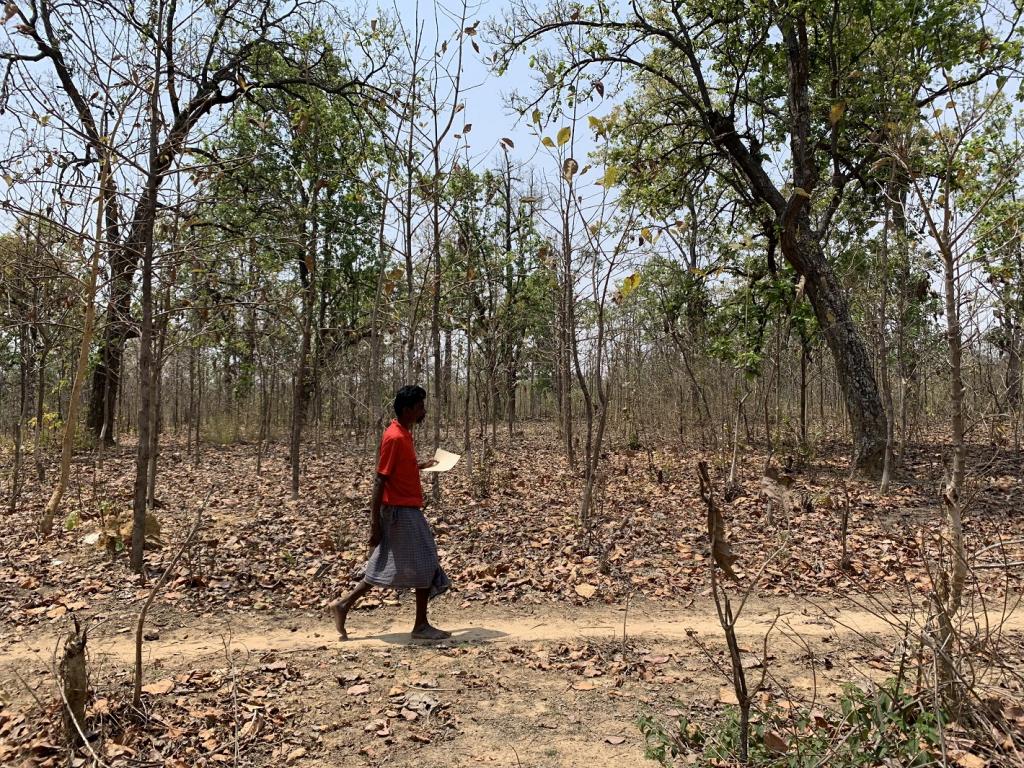 The 589 square kilometre Block comprises around 1 lakh people, of which 71 per cent are STs. Of the Block’s 60 per cent working population, 46 per cent are marginal workers who work for less than six months in a year. Only 32 per cent have work throughout the year, and most of them (around 66 per cent) are cultivators.

Further, FRA has not been implemented properly. According to the Chhattisgarh Schedule Caste and Schedule Tribe Development Department data, of the potential 27,000 FRA claimants, only around 15,000 claims have been approved in Korea district.

Even the average land title size of the approved claims is around 0.87 ha or roughly 2 acres. Under the Chhattisgarh Land Revenue Code, 1959, landholding under 5 acres is uneconomical.

The question worth asking here is a very old, yet unresolved one — whose forest is it? The people of these villages have been using these lands for generations, and now with a stroke of a pen, the state forest department has snatched away their only source of livelihood.

It’s ironic that the government doesn’t want to share the money raised for CA with the local communities — a sum of Rs 519 crore was released to Chhattisgarh between 2015-16 and 2017-18. It only emphasises the view that in the eyes of the government, forest dwellers don’t matter.