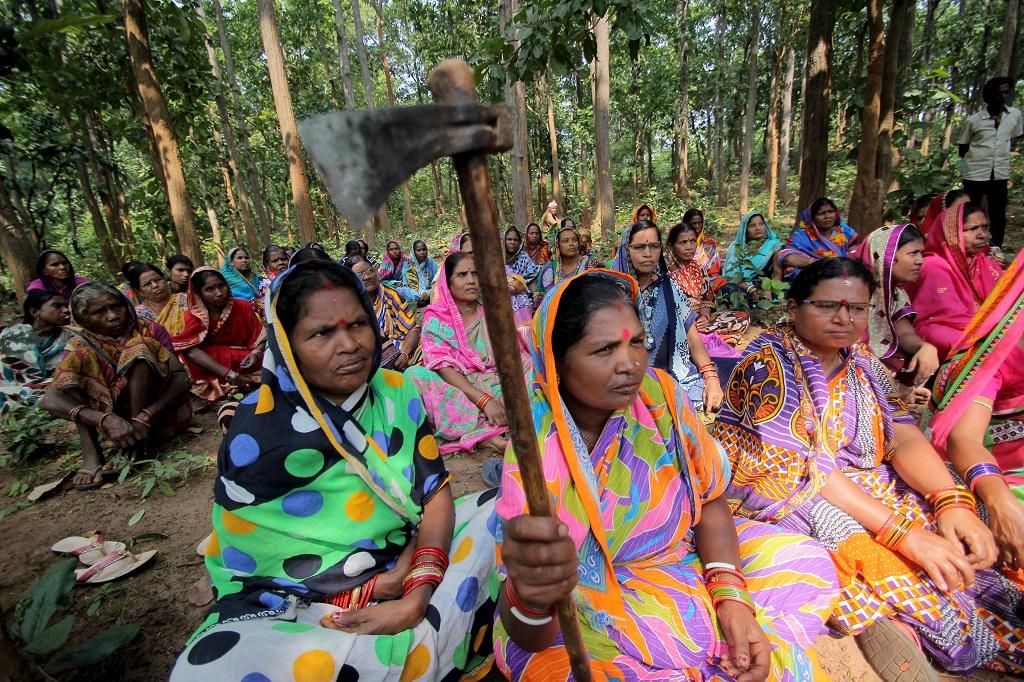 As many as 1,000 households of Balarampur stood their ground in the face of the administration aided by armed police force felling trees in Jhinkargadi forest. Credit: Jyoti Prakash Brahma

A resolute fight put up by about 1,000 households of Balarampur, a non-descript village in central Odisha’s Dhenkanal district, has forced the Naveen Patnaik government to retreat and scrap a Rs 102 crore brewing project, which was to be established inside a forest protected by villagers for more than four decades.

The decision was something more than winning a battle for villagers, who stood their ground in the face of the administration aided by armed police force felling trees in Jhinkargadi forest.

The Jhinkargadi forest, spread over approximately 243 hectare, is a common property resource not only for Balarampur but also for another 10-odd villages in Dhenkanal.

In 2014, the state government decided to bring parts of Jhinkargadi forest under the “land bank” which is being created across all districts to facilitate industrial projects. Under the land bank scheme, government usually chooses encumbrance free land.

Jhinkargadi forest despite being under direct control of villagers appears to have more tree density than forests under administrative control of the powerful state forest department.

When it came in the government’s radar, villagers raised objections, but the Dhenkanal district administration went ahead with its decision to handover forested land to industry.

Villagers under the banner of Balarampur Gramya Parichalana Parishad (BGPP) moved Orissa High Court (HC) objecting acquisition of Jhinkargadi land in 2017. Subsequently, the HC sought a status report. It, however, did not deter the administration to go slow. Villagers also approached the National Green Tribunal, which is also hearing the matter.

While court battles were on, CM Patnaik performed a ceremony for the project through video conferencing in the first week of November. Women of Balarampur hugged trees and sent out a message that they would not easily hand over the trees they had nurtured for years.

“When our forefathers started protecting forests, the land was full of shrubs with little tree coverage. The village committee started traditional rotational forest patrolling and prevented timber smugglers from having free access to forests. Our efforts bore fruits and Jhinkargadi is now one of the finest protected forests,” said Sushanta Kumar Dhala, secretary of BGPP.

In the early hours of November 17, the Dhenkanal district administration arrived on the spot with armed police personnel and started felling trees before villagers reacted to the situation. Women scuffled with police personnel but were chased away. When the villagers’ struggle flashed across media and people started extending support, the government ordered the stoppage of tree felling on November 18 and ordered a probe by the Revenue Divisional Commissioner. On November 19, the CM announced scrapping of the project triggering wild celebration in Balarampur village.