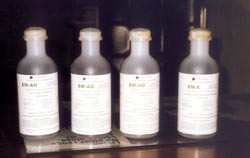 the Pune Municipal Corporation (pmc) was at one time faced with a stinking problem -- what to do with 1,000 metric tonnes of solid waste that the city generates everyday, out of which 700 metric tonnes was organic in nature. The department, desperately seeking a solution, found its messiah in 'effective microorganisms' (em) -- a Japanese product developed in 1982 by Teruo Higa from the University of the Ryukyus, Japan.

em is a liquid culture of 80 strains of beneficial and naturally-occurring microorganisms, with predominant populations of lactobacillus and actinomycetes bacteria. When a large population of some bacteria naturally decay organic matter, it results in a foul smell that attracts flies, making the dump a breeding ground for disease-causing organisms. It is here that em plays a crucial role . It leads to fermentative decomposition, which is a clean method that leads to no odour.

The technique is remarkably simple and cheap. All it requires is the em solution, molasses and water. One litre of em solution, which costs Rs 115, is mixed with three litres of molasses and 100 litres of chlorine-free water. This solution is kept in an airtight drum for seven days, during which the microorganisms, under anaerobic conditions, multiply 100 times. After this, the solution is further diluted with water and then sprayed on the garbage. The bacteria compost the waste in approximately 45 days.

pmc had started with a pilot study on 250 metric tonnes of waste in January 2002. It found the technology so effective, that it now treats all its 700 metric tonnes of organic waste with the help of this technique, which only costs Rs 1,500 per day. The corporation has even got the solution tested by the University of Pune, which certified em as an excellent and ecofriendly product.

Using em not only makes enhances the quality of the compost, but also speeds up the process of decomposition by 20-30 days. This decreases potential health hazards. Workers and ragpickers working at landfill sites of the city also say that using em has many advantages.