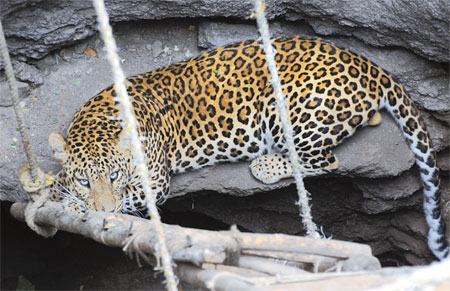 At least four leopards have been killed by poachers every week between 2001 and 2010 to sell their their skin and body parts in the market, says a new study released by the World Wildlife Fund. The report—Illuminating the blind spot: A study on illegal trade in leopard parts in India—was released on September 28.

The study documents 420 seizures of leopard skins, bones and other body parts reported from 209 localities in India during the study period between 2001 and 2010. “Our statistical analysis shows that around 2,294 leopards were trafficked in India during the period, an average of four animals per week over the ten years,” says Rashid H Raza, author of the report.

While Uttarakhand topped the list of major sources of leopard parts in the trade, Delhi was found to be the epicentre of the illegal trade, followed by Uttar Pradesh, Himachal Pradesh and Haryana. “Most leopard parts are smuggled out of India to other Asian countries, often through the porous border of neighbouring Nepal. The body parts are sold in Myanmar, Laos and parts of China,” says the report.

Leopards (Panthera pardus) are mostly poached for their skins for ornamental purposes and bones which are sold as a substitute for tiger bones used to prepare traditional Asian medicines. Even though the leopard is found all across India, there is no reliable estimate of its population.

Leopard is listed under Schedule 1 of the Wildlife (Protection) Act of 1972. The Act provides for maximum protection to Schedule 1 species because of their highly endangered status. Leopard is also listed in Appendix I of the Convention on International Trade in Endangered Species of Wild Fauna and Flora that prohibits its commercial international trade.

Divyabhanusinh Chavda, president WWF (India), says that despite frequent reports of illegal trade in leopard parts, the problem remains unrecognised by the government. “The massive scale of illegal trade was overshadowed by illegal trade of the body parts of the national icon, tiger,” said Chavda.

The report recommends the establishment of a task force to tackle the illegal trade. Else what happened to tigers years ago may happen to leopards, it warns. It also asks for the government to maintain details of all the seizures by the forest department in a public web portal.