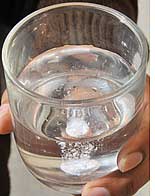 Your body already has it; just eat some berries

SWALLOWING an aspirin tablet, every time you have a headache, might not be necessary anymore. You could simply let your body produce its own. Fortifying yourself with some fruits, preferably berries, might be useful. This comes in the wake of a new discovery made by a team of scientists claiming that the human body can produce a chemical called salicylic acid (SA), the active ingredient of aspirin. Salicylic acid is a natural ingredient of fruits, mainly berries, produced by plants regularly to fight pathogens.

Aspirin has been used for managing moderate pains, inflammations and fever for nearly 100 years. Currently over 40,000 tonnes of aspirin tablets are sold annually making it one of the most popular prescription-free drugs in world.

Aspirin functions by breaking down to salicylic acid. It is salicylic acid that is responsible for aspirin's effects in relieving pain. Studies have found SA in the blood of people who had not consumed aspirin, establishing the fact that it is found naturally in human bodies.

For the current study, a team led by Gwendoline Baxter from the National Health Service, UK, set about to determine whether SA found in the human body results from consumption of fruits or if the body can produce it without the aid of precursors. They gave volunteers benzoic acid and found their bodies to manufacture SA. Benzoic acid is a major component of salicylic acid and is also found in fruits, mainly berries.

The team found the level of SA in the blood of different individuals varied according to the level of benzoic acid administered to them. At the same time, subjects fasting for colorectal surgery also revealed a small amount of SA in their blood. This proved that the human body is capable of manufacturing SA with or without precursors. The next step is to find out exactly how much the contribution of a precursor is. This requires further assessment.

"Salicylic acid has a broadly defensive role in animals as well as plants and could be recognized as a bioregulator," said Baxter. The study was published in the December 24 issue of the Journal of Agricultural and Food Chemistry.