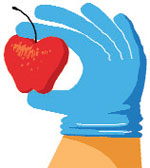 THE Supreme Court has directed the food regulatory body to reconstitute its scientific panels. The Food Safety and Standards Authority of India (FSSAI) had inducted members from the food industry, defeating its purpose of regulating that very industry.

The Authority has eight scientific panels, of which seven have 18 members who are employees of big food businesses (see ‘Corporate connections’). In February, the apex court reprimanded FSSAI for violating the Food Safety and Standards Act, 2006, that states the authority should create scientific panels with independent scientific experts.

It was hearing a writ petition filed by the Centre for Public Interest Litigation (CPIL) on the harmful effects of chemical additives in soft drinks and their full disclosure on the labels. The Authority told the court that it will reconstitute the panels within two weeks and submit its affidavit on the studies carried out on chemical content of soft drinks and their harmful effects.

“While the Authority reconstitutes the panels it is important that the new panels review the decisions taken in the past two years based on the recommendation of these scientific panels,” said Ashok Kanchan, advisor-technical, Consumer Voice in Delhi.

Minakshi Sarma Dabas, associate with the Corporate Law Group that follows the food sector, however, said since the rules for FSSAI are still being drafted the scientific panels have neither taken any decision nor considered an application. She explained that any new proposal will first be considered by the specific scientific panel and then by the scientific committee before the Authority takes a decision.

“Scientific panels are constituted to assist the Authority on scientific issues and do not independently take any decision.” FSSAI did not respond to queries till the date of publication.

The Authority was set up in 2006 after Delhi-based non-profit Centre for Science and Environment (CSE) found dangerous levels of pesticides in soft drinks. It raked up a debate on food sampling, analysis, food additives and processing. But when the scientific panel for sampling and analysis was constituted it had among its members G M Tewari, general manager for product development and regulatory affairs of Coca Cola India Pvt Ltd. He later retired from the company. The panel for food additives and flavouring has representation from both Coca-Cola India and Pepsico International.

Nestle and Hindustan Unilever, that were made to withdraw misleading television commercials last year, are on the scientific panel on labelling and claims/advertisements.

“If those that have to be regulated are made the regulators, then how can a decision be taken in public interest?” asked Arun Gupta of advocacy group Alliance Against Conflicts of Interest. “The court’s decision is a welcome move.” B Sesikeran, the head of the panel for labelling and claims/advertisements, denied conflict of interest. “Formation of (food regulatory) guidelines goes through several stages of review and would be put up for public opinion, so to presuppose there would be a conflict of interest may not be proper,” he said. PepsiCo and Coca-Cola refused to comment on the allegations and the court order. Organisations like Consumer Voice and CSE raised concerns in 2009 when it came to light that employees of big food businesses had sneaked into the scientific panels of the authority. Gupta’s group approached the Ministry of Health and Family Welfare in July 2010 for action against the authority.

Prashant Bhushan, counsel for CPIL, said in the affidavit filed in June 2009, “The recent developments show the gove rnment is more interested in protecting the interests of the soft drink companies than the interest of the public.”