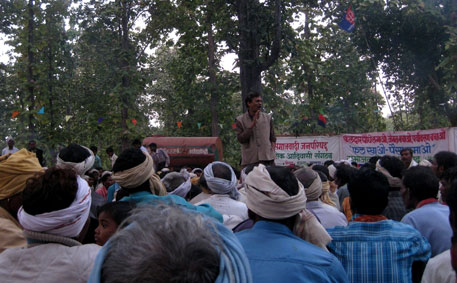 On December 8 last year, drumbeats sounded from deep inside the forests of Umberdoh in Betul, Madhya Pradesh. People had assembled there from far away villages, many having travelled for nearly 12 hours. The sun gave way to a full moon, the wintry winds began to blow and people huddled around a fire while songs of freedom from oppression began to echo. Rapt attention was paid to details and testimonies were presented of a new process that promised salvation from chronic malnutrition, while ensuring a robust livelihood.

A year since, and many more meetings later in other villages in Betul, the idea of planting fruit tree saplings is slowly taking root among the Korku and Gond adivasis of southern Madhya Pradesh

Two grassroots organisations, Shramik Adivasi Sangathan (SAS) and Samajwadi Jan Parishad (SJP), have kick started this afforestation drive. Aimed at addressing the decreasing forest cover in Madhya Pradesh—the state accounts for more than one-third of the forestland diverted from the country since 1981—this process has already found acceptance among villages in Chincholi and Ghodadongri blocks of Betul.

SAS began the campaign for fruit sapling plantation on July 1, 2011, when the Hari Jiroti festival to welcome the monsoon and celebrate the sprouting of new crop was being observed in the region.  Faldaar paudhe lagaayenge, bhukhmari mitaayenge (through fruit sapling plantation, we will eradicate malnutrition) and Purkhon se naata jodenge, jungle-zameen nahi chodenge (we'll establish links with our ancestors, we won't leave our land and forests) were the slogans raised on that day.

“We requested for 50,000 fruit tree saplings from the district authorities, but received none. But that did not deter us,” says Anurag Modi of SAS, who has been working in the region for almost two decades. Modi claims that so far, 20,000 saplings of fruits like Indian gooseberry (amla), jamun, mango, guava and custard apple have been planted in the forests, close to water bodies.

Giving back the responsibility of maintaining the forest cover to  adivasis, and thereby ensuring their access to what could possibly provide them with the nutrition they lack, is in stark contrast with the Green India Mission-2011 of the Union Ministry of Environment and Forests (MoEF). The mission's objective is increase of forest cover on 10 million hectares of land by year 2020. The total cost of the mission has been projected at Rs 46,000 crore over 10 years.

The ministry's projects are all heavy on funds. In fact, Rs 871.25 crore has already been allocated by Madhya Pradesh towards compensatory afforestation, as on June 30, 2011, according a statement of the minister of state for environment and forests, Jayanthi Natarajan, made in the Lok Sabha. Natarajan also stated that 176.54 million trees had been planted on public and forestland in the state in the past three years. In a separate correspondence between the office of the principal chief conservator of forests (development), Madhya Pradesh, and the CEO of ad-hoc Compensatory Afforestation and Fund Management and Planning Authority (CAMPA) of MoEF, dated March 18, 2010, an annual plan of operation for the utilisation of the amount of NPV (net present value) from the afforestation fund was submitted. In that proposal of a financial requirement of Rs 17236.29 lakh, a significant amount had been quoted for the conservation of wildlife and protection of forests, which includes building patrolling and forest chowkis, purchase of wireless equipment, utility and range-level patrolling vehicles, firearms and promotion of energy-saving devices.

“Why do we need such a large budget to protect forests with firearms and fences, when adivasis have been taking care of forests for generations?” asks Modi.  “The government mostly promotes monoculture, and it wouldn't be wrong to say that trees it plants would be to ensure commercial gain in future, like teak or eucalyptus,” he adds.

Modi says that the government is wasting its time in trying to implement such schemes, which end up being huge scams. “Adivasis have survived on wild fruits for centuries. They understand best how their survival revolves around forests, and know how to take care of it,” he says.

During its campaign, which included a foot march to promote the need to reclaim government wastelands and a large meeting in December, 2011, SAS put emphasis on the adivasis' symbiotic relationship with fruit trees in forests. The announcement pamphlet circulated by SAS and SJP for the meeting urged people to bring symbols of their gods and goddesses to the venue in order to honour the deities. The pamphlet further explained how the British rule in India was responsible for systematically doing away with fruit trees from the forests and replacing them with teak plants; this practice continued well after Independence. “The livelihood from mango, jamun, mahua, cashew, jackfruit, tamarind on just an acre will ensure that the forest regenerates. The livelihood thus gained will be more than what could be derived from agriculture on 10 acres of land. Let's clear off the weeds of lantana to enrich the wastelands collectively,” says the pamphlet.

During this meeting, workers of SAS, as well as residents of nearby Chirapatla village, described the place fruit trees have in the adivasi ethos of living. Some spoke of the need to protect the river by planting trees; others explained how saplings could be procured from SAS and SJP. Modi explained how people in Chunajoori village had developed their own system to keep a tab on the plantation. First, the people cleared the weeds. They then planted the saplings, dug a well and even developed a nursery. This is a significant way to protect those species of fruits that are disappearing. The people of Chunajoori are also maintaining a register for the attendance of people planting fruit saplings. Roughly 300 man days from the labour of 100 people have been decided by the village to be dedicated for this process.

Modi says that this process had begun sporadically in few villages, but the forest department officials destroyed the saplings. “They also demolished the well that was dug up especially for this plantation. Finally, another set of saplings were burnt down by the JFM (Joint Forest Management) Committee of another village at the department’s instigation. But we are reviving this process slowly,” he adds.

People in the forest department are sceptical. R B Sinha, who until recently was the Conservator of Forests, Madhya Pradesh, says that horticulture is not permitted in forestland. “As per the Forest Conservation Act of 1980, fruit trees cannot be grown over forest land.” The adivasis find this response ridiculous. “Fruit trees have always been growing in forests. We won't be planting any videshi (foreign) fruit trees here,” says an old man.

“About 30,000 children in Betul district are malnourished. Vision loss is a prominent condition among the children. Feeding them fruits from the trees you plant is the best way to provide nutrition to your children, without any additional cost. This is why the threats to keep away from forests have not deterred them from deciding their own fate. They do see hope in these fruit trees,” Modi says.

Priyanka Borpujari is an independent journalist, and is the IWMF (International Women's Media Foundation) Elizabeth Neuffer Fellow for 2012-2013