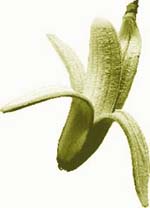 fed up with bananas turning over-ripe? Just wait for a couple of years and you just might have a solution. A group of scientists at the National Botanical Research Institute ( nbri ) in Lucknow, Uttar Pradesh, are close to developing a transgenic banana plant that would bear fruits the ripening of which could be delayed. If the nbri scientists are able to successfully prepare the transgenic variety of banana on the basis of work done so far, it might lead to a revolution in the horticulture industry.

How is that possible? Well, the delayed fruit-ripening technology has already made headway in countries like usa , where research is underway on several plants. What the team led by Parvendra Nath, head of the department of plant molecular biology at nbri , has achieved is a major breakthrough in India. They have identified a gene that leads to ripening, and then gone on to prepare an 'antigene' from that. The antigene would delay the ripening of the fruit. The process of preparing the transgenic plant variety can be divided into four stages:

l Isolating that gene from the plant;

l Reversing the functions of that gene to prepare an antigene; and

l Putting the antigene back into the plant, thus preparing a transgenic variety with both normal and antigenes.

The normal gene starts the process of ripening, while the antigene opposes it. When both function together, one can easily guess the impact: the ripening is delayed.

Nath and his colleagues have reached the third stage. The antigene has already been prepared and the nbri team is just a step away from preparing the transgenic variety of banana. The antigene, when put back into the plant, would definitely delay ripening. But by how much? It is too early to assess that. "We are yet to get control over the antigene's behaviour. As of now, they cannot be regulated to give a specific timeframe for ripening. But, maybe after a little more work on them and after getting more acquainted with them, one might have an idea about their exact behaviour and, who knows, they might be regulated," says Nath.

Officially, this is the first-ever ripening related work done on the banana plant. So far, scientists the world over have done extensive work of this kind on other plants, most popular among them being the tomato, but no one had touched the banana because of its complex genetic structure. Nath says such work "has not been done earlier for sure" in India.

"At the moment, I think we are the only group in India that has achieved success to this extent. We have presented our work in at least two national and one international meeting. Soon there will be a research communication in this regard. We have also entered our gene sequence in the gene bank. Internationally, we are one of the very few groups who are trying to effect fast ripening in banana as has been done for tomato. No one as yet has achieved it. We have the added advantage of having cloned the gene as well as its antigene," Nath observes.

"For putting the antigene back into banana, one has to go through the transformation and regeneration of the plant. Banana is not an easy plant for this purpose," Nath points out. A transgenic variety of tomato, in fact, is being marketed since 1994 by Calgene Incorporation, a us -based company. Apart from the us , some research is also being conducted in the uk and France. Some scientists in France are working on a transgenic variety of melon.

Talking about the changes in taste and colour of the fruit, Nath says: "All biological systems behave differently, more so when you are introducing something foreign to it. Its acceptance or rejection can only be verified after its success and then one tries to improve or modify it to one's advantage. A change in taste may occur... [and] there could be some extended coloration at some stage." He points out that a longer shelf-life and lesser spoilage will add to the value of any fresh fruit or vegetable -- to the grower as well as the trader -- cutting down on storage and transportation costs.

Interestingly, Nath's field of work was not molecular biology, not until he went to the us for his post-doctoral research. After getting his master's degree in biochemistry, he did his doctorate in animal science. But, a four-year stint at the National Institute of Health in Maryland changed things. He specialised in plant molecular biology, and after coming back to India, he was asked to set up the department of plant molecular biology at nbri , Lucknow. "So, since 1986, no animals, only plants," he quips.

In 1993, he went back to the us to study abscission (the natural separation of a leaf or other part from a plant) and the ripening processes of plants. It was on his return that he was offered the project on ripening by the department of biochemistry. Today, with the help of three scientists and nine research associates, he has achieved a breakthrough. Nath has already set his eyes on the next target: preparing antigenes to prevent softening of the banana.