Home PCs predict global warming will be worse than believed 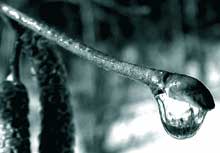 a novel experiment involving 95,000 people in 140 countries has shown global warming could be worse than believed -- temperatures could rise by 2-11 c if greenhouse gas emissions go unchecked. Previous studies predicted that doubling of pre-industrial levels of carbon dioxide emissions could raise the temperature by 2-5 c.

The new estimates were early results of the ongoing experiment called climateprediction.net. It uses the spare computing power of pcs of all the participants through what is known as grid computing. An emerging concept, grid computing makes it possible to use idle resources of a large number of computers in a network for operations requiring enormous computing power. The study was conceived by scientists from several British universities and the Hadley Centre for Climate Prediction and Research of the uk Meteorology Department. They announced the findings in the January 27 issue of Nature (Vol 433, No 7024).

According to the scientists, the results are scary. While there is an agreement on what would be the lower end of the range (2 c), the upper band is more than double the previous estimates.

Though the experiment is being conducted outside the realm of the Intergovernmental Panel on Climate Change, it is the most massive ever to simulate global climate behaviour by 2050. For participating in the experiment, people downloaded the software from the Internet. Participants have completed 60,000 simulations and, in doing so, donated more than 8,000 years of computing time. In comparison, the Hadley Centre, one of the finest climate change modelling facilities in the world, ran 128 simulations last year.

The project was begun in September 2003 with David Stainforth and Myles Allen, physicists at the University of Oxford, as chief scientists.