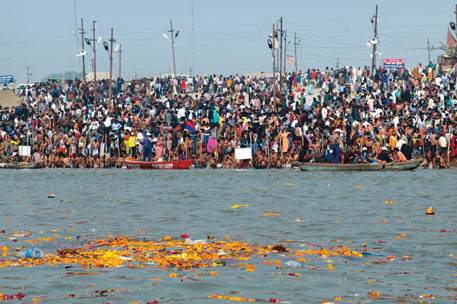 As many as 956 grossly polluting industries (GPIs) in Uttar Pradesh have been issued notices by Uttar Pradesh Pollution Control Board (UPPCB) for releasing their effluents directly into the Ganga river.

The National Green Tribunal (NGT) on April 22 had ordered UPPCB to issue these notices  after a panel, consisting of members of the board, inspected the sites. The panel was initially asked to undertake site inspection of Simbhaoli Sugar Mills, Simbhaoli Distillery and Gopaljee Ghee. These were the major industries that the petitioner in the case, Krishna Kant Singh, claimed to be causing pollution. However, on reaching the site, the panel found there were several other industries which have not been treating their effluents and discharging them directly into the Ganga.

In an affidavit, the Central Pollution Control Board (CPCB), which was made party in the case, submitted that it had already compiled a list of GPIs and that 764 grossly polluting industries in the four states that the Ganga flows through are discharging waste water into the main stem of the Ganga; 687 of these industries are in Uttar Pradesh.

These industries include distilleries, dyeing and textile units, fertiliser and pesticides units, pulp and paper industry and tanneries. The tribunal had asked UPPCB to issue notices to these 687 industries under Section 5 of the Environment (Protection) Rules, 1986.

The UPPCB issued notices these units and also to additional 269 industries that it had identified as grossly polluting. The tribunal directed that officials from CPCB, UPPCB and NRGBA should examine all these 956 notices and submit a report with photographs to the tribunal on May 21.