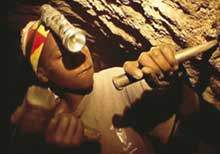 Gem Slaves Tanzanite's Child Labour Produce and directed by the un office for the Coordination of Humanitarian Affairs, irin 15 minutes

Gem Slaves Tanzanite's Child Labour begins with a shot of a child labourer freezing as he hears a layer of mines collapsing above him. He is probably with a colleague. Wilson Peter, who works in a tenebrous mine of Mererani in northern Tanzania, is frequently sent by his masters to run errands fetch water, soda and diggers.

But that's probably the least demanding of his jobs. Wilson works round-the-clock, quarrying gems. The labour has taken its toll the 12-year-old complains of chest pain, and dreads dynamite accidents and collapse of mines. But he has a little choice.

And in any case it's going to be extremely difficult for Wilson and other children like him to break away from the mines. Mererani is the only place that produces red gems. The us $300-million mining industry has struck deep roots in the Tanzanian economy--even its culture. And rooting out child labour from it is extremely difficult. Efforts by ilo's International Programme for the Elimination of Child Labour--as well as some regional humanitarian programmes like Good Hope--to bail out the children has reached only 10 per cent of those affected.

This film is meant to be an advocacy tool for such campaigns. Its narrative is compelling, it could have been even more so had the filmmaker woven his story around Wilson Peter. The story often breaks away from the main narrative to sub-plots, such as those on girl child prostitution. Moreover, the film features just another child labourer, Muthias. Some of the visuals, like a child clambering the dark recesses of the mine with headlight mounted on the helmet, does tantalise one into expecting more on what drives kids as Wilson and Muthias to the mines. But then a 15-minute long documentary has its limitations.

The film does leave one with lingering images as these kids speak into the camera, they are not ill at ease. Excruciating work at the mines has hardened them.