Perhaps the most distressing aspect of our current election system is that millions of women in India have not been registered to vote even though they are over eighteen years old and eligible.

The disenfranchisement of women voters is hopefully not quite in the same league as the ‘dark arts’ of voter suppression around the world. However, it is a deeply worrying phenomenon of our electoral systems.

The data points towards a major problem: the most reliable measure of population, the 2011 census, suggests that by 2019 the total population of women (aged 18 and above) in India will be 97.2 per cent of the total men’s population. Consequently, it is only to be expected that the total electorate of women voters should be the same percentage of the total male electorate—or at least very close to this figures. However, the Election Commission data for 2019 states that women voters are only 92.7 per cent of male voters.

This difference between what it should be, 97.2 per cent, and what it in reality, 92.7 per cent, indicates that there is a 4.5 per cent shortfall of women voters. Why is this? And is it significant? It is now clear from past census and Election Commission data that this under-representation of women has occurred election after election, decade after decade. The worst disenfranchisement of women was in the 2014 Lok Sabha election when 23.4 million women were denied their right to vote.

For now we are only focussing on the problem in the 2019 election.

In fact, while 4.5 per cent may seem a small percentage, when converted into actual numbers of women, the scenario is staggering (see ‘Female disenfranchisement’). The 4.5 per cent of missing women translates into as many as 21 million women who are denied their constitutional right to vote simply because their names are not registered in the voter lists around the country. 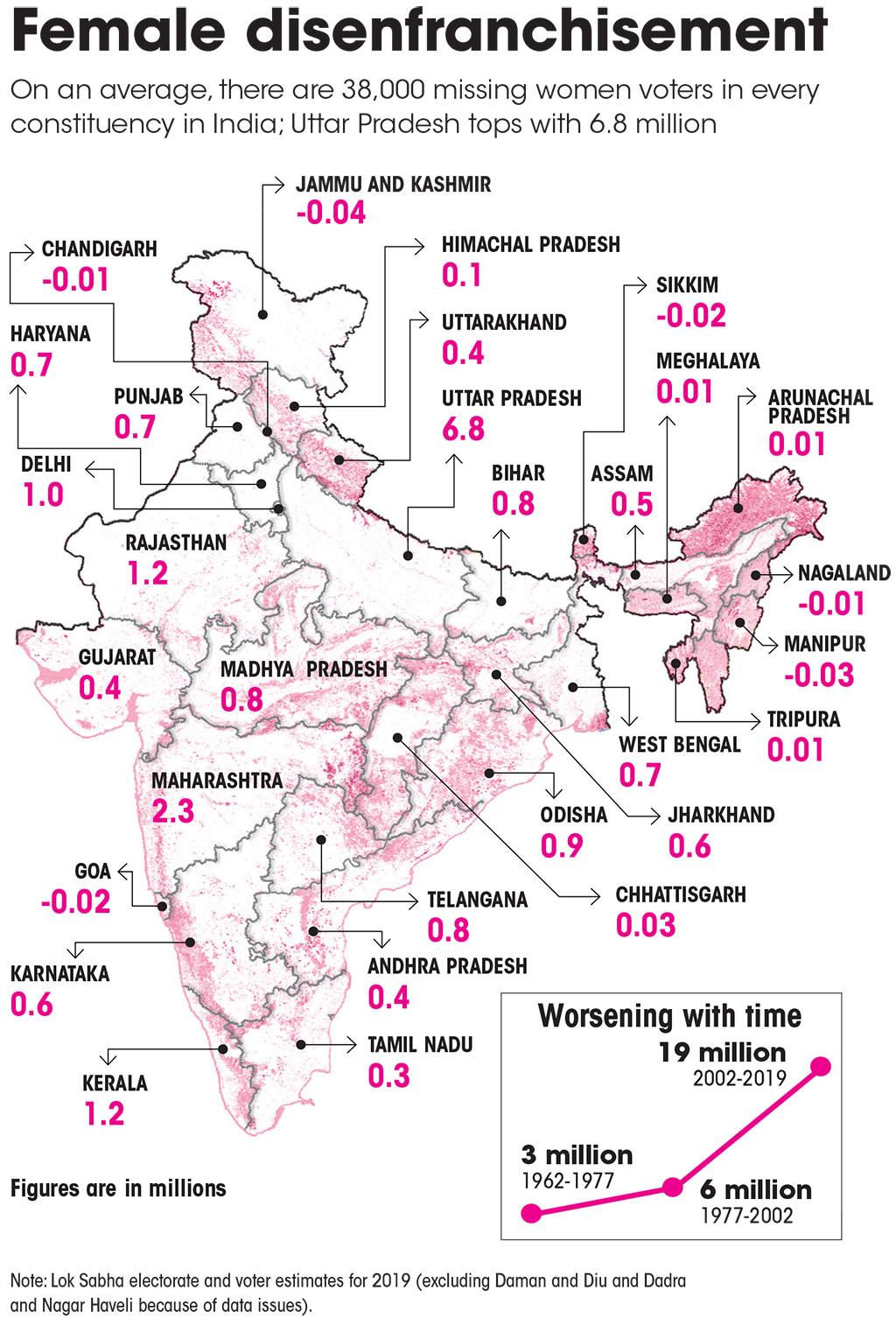 The large number of women voters missing from the electoral rolls also suggests that the total electorate in India should be above the official 895 million, perhaps even more than 915 million.

The Election Commission cannot be blamed for this massive failure. On the contrary it is in spite of the huge effort that they make year after year to enrol women voters, with a range of outreach programmes targeted specially at women.

It is a result of a combination of social and political factors and what is worrying is that it is worsening over time.

There are a major biases in the extent of missing women between regions with some states have a much higher level of disenfranchised women than others.

In the 2019 Lok Sabha elections, the top three states which will have the largest number of women who are not registered despite being eligible voters are Uttar Pradesh, Maharashtra and Rajasthan. These three states will account for over 10 million of the 21 million missing women voters in 2019.

It is shocking that in Uttar Pradesh, 85,000 women voters on average will be deprived of the right to vote in every single constituency.

Moreover, among the bigger states, those which have the best record with the lowest under-representation of women are from the south of India: Tamil Nadu and Andhra Pradesh. Even among the small states of India, the two worst offenders are from the Hindi belt: Uttarakhand and Himachal Pradesh.

Moving on from absolute numbers of missing women, even if we analyse the percentage of women without their legitimate voting rights, once again the Hindi-belt stages are the worst: in UP above 10 per cent of women will be denied the right to vote, in Rajasthan and Maharashtra it is over 5 per cent.

These are unacceptable high percentages of disenfranchised women. And once again it is sad to see that even in India’s ‘capital’ state, Delhi, a whopping 16.9 per cent of women who should be allowed to vote will not be able to.

But there is a silver lining. Many of the smaller states have more registered voters than men voters. Perhaps these variations reflect the bigger picture of the vastly different cultural and political attitudes to women in the many regions of our country.

For more on this anomaly, several commentators have analysed the issue of low women’s participation and registration.

An appeal to the Election Commission of India: We need to take note of this shame on India and immediately take steps to rectify it before the 2019 Lok Sabha elections. India is facing an extraordinary situation that is terribly unfair to the women of India—21 million women who are entitled to vote will be denied the right to do so because their names are not on the voters’ list.

There may not be enough time to rectify the voters’ electoral rolls before the 2019 Lok Sabha elections. In view of this, the rule should now be: Any woman who comes to a polling station in the constituency where she resides and is over eighteen years old, be allowed to vote.