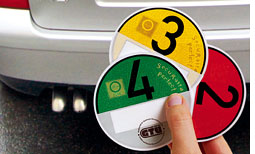 A car badge system requires vehicles to carry a coloured badge--red, yellow or green--certifying their level of exhaust emissions. Drivers need to display these badges before entering the inner city zones, failing which they could be fined 40 euros (us $58.80) and a penalty point on their licences. The system applies to all vehicles, including those registered outside Germany and will be expanded to other German cities in the course of the year. Berlin's environment senator, Katrin Lompscher, says only vehicles with extremely high emissions of noxious substances will be banned under the system. The German Motoring Club, adac, is not happy with the restriction. About 1.7million older diesel vehicles are too polluting to qualify for a badge and will be barred from entering city centres, it says. adac plans to file a lawsuit against the system.