He had filed a petition against illegal mining by MP 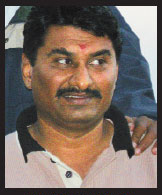 He was fighting against alleged illegal limestone mining in Gir Sanctuary Gujarat. The 200 sq km area is home to the Asiatic Lion, leopards, spotted deer, nilgais and chinkaras.

Jethava had filed a public interest petition in the high court, alleging mining in the Una and Kodinar areas of Saurashtra; the petition mentioned a state minister supported these activities. Till the filing of this report, a police complaint was yet to be lodged. Police officials in Ahmedabad said investigations were on and refused to comment further.

Jethava alleged BJP MP Dinubhai Boghabhai Solanki and his relatives were running illegal mines and stone crushers in a village on the border of the Gir forest. The petition also said the Central and Gujarat governments were not able to curb mining activities within five-km radius of Gir Sanctuary, as stipulated by the Wildlife Protection Act 1972. The mining activities in Gir’s ecological zone were destroying the natural habitat outside the forest on an unprecedented scale, the petition said.

Condemning the incident, RTI activist Arvind Kejriwal said, “It is time to look at systemic changes; Parliament must pass the Lok Pal Bill pending in Lok Sabha since 1968.” It needs to be revised because it is weak in its present form. The Lok Ayukta must be given the power to protect whistleblowers like Jethava, he said. The police and district authorities cannot ensure their safety in corruption cases because the two are under state control, Kejriwal added.