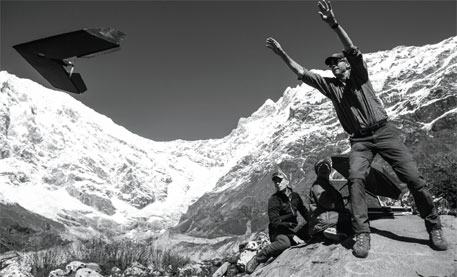 Drones are normally associated with war and surveillance, thanks to the extensive use of the technology by the US in its fight against terrorism. But a team of scientists in Kathmandu has for the first time used the technology to study an inaccessible Himalayan glacier.

The ICIMOD team, along with researchers from Utrecht University in the Netherlands and ETH Switzerland, used the drone to understand how the glacier behaves during the monsoon month of May and the post-monsoon month of October. Their research paper appeared in the July issue of the Remote Sensing of Environment journal.

“We all know that human expedition to study inaccessible glaciers is not possible,” says ArunBhaktaShrestha, regional programme manager at ICIMOD. Normally, scientists study glaciers with the help of satellite images, which are low-resolution and not always accurate in capturing the topography. This prompted the team to experiment with drones that can fly closer to the glacier. Shrestha says drones are essential to understand what is happening on the ground and to properly study the impacts of climate change.

The scientists decided to attach a point-and-shoot camera to a drone called Swinglet for mapping the glacier. Swinglet was then made to fly over the glacier at a speed of 36km/hr. The drone, small enough to fit in a suitcase, undertook 10 flights of around 30 minutes each between May and October 2013 and returned with hundreds of high-resolution photographs. 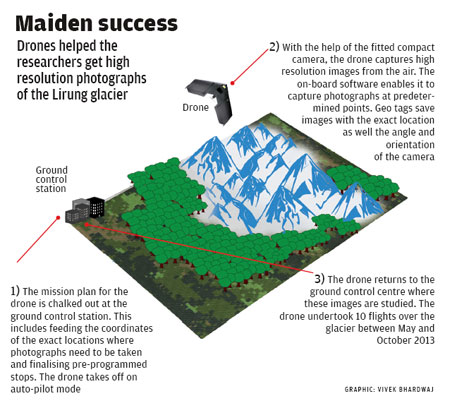 Fitted with the camera and a GPS (global positioning system), Swinglet was programmed to fly certain patterns over the glacier. An onboard software told the camera to take photographs at predetermined points. The scientists say using drones for clicking high-quality pictures was not easy. One of the biggest challenges was to ensure the drone is stable for clicks. All the 10 flights of the drone were made in the morning to avoid high wind.

The observations show that the glacier is decaying. The researchers found the glacier is not only losing mass, but that melting is more than expected earlier, especially around the small lakes formed on the top of the ice and ice cliffs within the glacier. “The time period of the study was crucial to understand the behaviour of the glacier during monsoon and post monsoon. The comparison of data over the two periods of time was related to height difference of ice cliffs and also flow velocity of glacier,” Shrestha told Down To Earth.

Emphasising on the importance of such studies, the team says better knowledge of individual glaciers is important in the Himalayas where glacier behaviour varies significantly from valley to valley and range to range. Even the latest report from the Intergovernmental Panel on Climate Change states that glacier characteristics in this region “are still only poorly known”. “We suggest that future research should focus on the interaction between supra-glacial ponds, ice cliffs and englacial hydrology to further understand the dynamics of debris-covered glaciers,” say the researchers in the paper.

It is safe to say that the research is one of the most comprehensive studies ever done on a Himalayan glacier. And for the insights, the team can thank a piece of technology that appears as sturdy as cardboard and fits in a suitcase.

With inputs from Anushka Kaushik