Global environmental negotiations on issues such as climate change, biodiversity and desertification often seem to be far removed from the everyday reality of more pressing environmental problems like pollution. 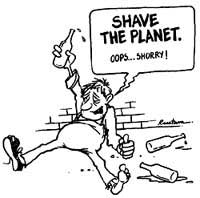 Dear Readers,
Global environmental negotiations on issues such as climate change, biodiversity and desertification often seem to be far removed from the everyday reality of more pressing environmental problems like pollution. Even environmental groups sometimes underestimate their importance. As a result, decisions taken by government representatives often go unnoticed and undebated. To raise the awareness of environmental governance, the Centre for Science and Environment's Global Environmental Governance unit will bring you this column in alternate issues of Down To Earth . We hope you find it useful. Comments for further improvement are welcome.
-- Editor
Vienna Convention: Fifth Conference of Parties (CoP-5); and Montreal Protocol: Eleventh Meeting of Parties (MoP-11)
November 29 to December 3, 1999; Beijing, China

The hole in the ozone layer over Antarctica is now twice the size of China. Yet at the recent meetings, governments failed to address the issue head on.

The us opposed all efforts to increase ozone protection, specifically those put forward by the European Union for amendments to the protocol's legislation on ozone-depleting substances. Unfortunately, it seems that the expanding list of ozone-depleting substances is causing convention-fatigue among participants. Yet with new ozone-depleting chemicals being produced each year by the chemicals industry, it is crucial that the protocol should have the legislative capacity to deal with them swiftly and absolutely. This need was not met during the meeting.

Developing countries expressed a general desire to meet their schedules for phasing out cholorofluorocarbons ( cfcs) earlier than planned, but were adamant that in order to do so, they would need a multilateral fund of at least us $700 million. Industrialised countries offered us $300 million. The fund was finally fixed at us $440 million for 2000-2002 ( us $26 million down on the 1997-1999 amount). There was debate over the fund's donation of monies to developing countries for technologies that will become obsolete. This short-sighted planning is particularly worrying given that the fund does not provide grants for second transitions in such cases.

The good news is that worldwide production of cfc s has reduced by 85 per cent, and cfc concentrations in the stratosphere have decreased accordingly. Nevertheless, only 24 of the 166 countries have actually submitted data on their cfc production and consumption in the past year. This makes it difficult to assess the global efficacy of the measures taken under the convention. One can only hope that countries will rethink their ozone strategy before the next meeting.

CoP-5 closed to a mixed bag of praise from ngos. For Basel Action Network ( ban ) and Greenpeace International, the meeting "registered significant progress" due to the new ratifications of the Basel Ban. The Ban was amended to the convention in 1995 to prohibit export of hazardous wastes from industrialised countries to developing countries. It has only 17 of the 62 members needed for it to enter into force. But Greenpeace also condemned the CoP for its adoption of a liability protocol which fails to hold generators of hazardous waste liable and fails to cover potential damage done during the disposal of waste.

Delegates failed to capitalise on the rare opportunity provided at the CoP to take stock of ccd 's anti-desertification measures. Many countries complained that the fight against desertification is hampered due to lack of funding and support. To try and get by with inadequately funded local programmes at this foundational moment makes a mockery of this convention. Yet very little time was given to discussion of these crucial issues. Most of the CoP revolved around review of the convention's organisational structure. Sadly the convention, which was innovative for its 'bottom-to-up' approach to effective policy-making, has allowed itself to become bogged down in organisational detail.

The gef council meeting reviewed progress on the mainstreaming of environmental concerns in the World Bank's functions. Almost all of the 32 council members of the gef were dissatisfied with the progress made by the World Bank in developing a strategy for addressing global environmental concerns in its policies and programmes. The bank is expected to work towards a schedule to complete an environmental strategy for presentation to its board of executive directors by October 2000 and to the gef council by November 2000.

The gef council said that high priority should be given to the action plan addressing linkages between land degradation and the gef focal areas. It called on the gef implementing agencies (the World Bank, unep and undp ) to cooperate with the global mechanism to fund the ccd .