Activists led by members of international non-profit Greenpeace and Coalition for a GM Free India protested in front of environment minister Veerappa Moily’s office on Tuesday against his decision to allow field trials of genetically modified (GM) crops.

The protesters unfurled a banner, which said, "Moily Selling the Nation", and urged politicians to come forward and save food, farming and the environment in India. They alleged that Moily had taken the side of multinational seed companies to permit hundreds of field trials, though his predecessor, Jayanthi Natarajan, had taken a cautionary approach and had put the trials on hold.

According to sources in the Union environment ministry, Moily had signed and cleared the decisions of the Genetic Engineering Appraisal Committee (GEAC) around February 20. The decisions by GEAC, the apex body approving research and field trials of GM crops in India, were taken on March 22, 2013.

But former environment minister Jayanthi Natarajan had decided to hold up the trials, stating that the scientific community in the country was split vertically down the centre in its views and scientific protocols to prevent damage from GM crops were yet to be developed in India. She had disagreed with the agriculture ministry which supports the technology.

Last week while addressing media persons Moily downplayed Natarajan’s reservations and said that there was some misconception that has been cleared now and this was the reason for his green signal to the field trials of GM crops. He added that the trials had to nothing with the Supreme Court case. 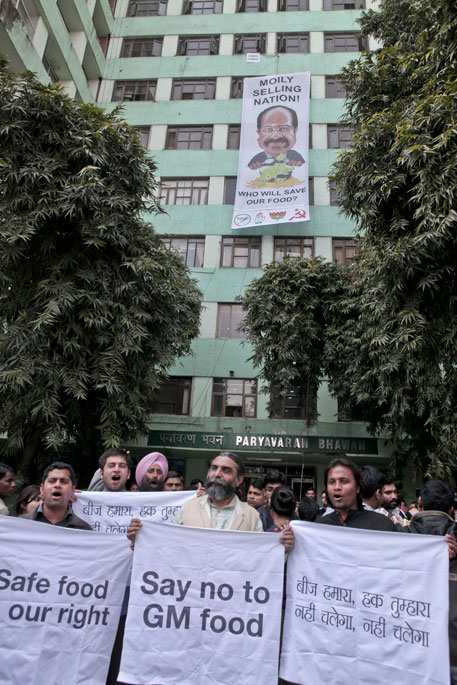 Moily’s approval for the GEAC decisions will now allow event selection trials on rice, castor, cotton and a few other crops. These GM crops are by biotech giants like Bayer Bioscience Private Limited, BASF India Limited and others. Besides, it gives nod to Monsanto India Limited to conduct field trials of GM maize with events MON 89034 and MON NK603 in Punjab, Haryana, Maharashtra, Gujarat and a few other states.

Convenor of Coalition for a GM Free India, Rajesh Krishnan, says, "It’s clear now! Moily was brought in during the last innings to give approvals for these risky experiments of GM crops and with this one act he has again proved that they do not care about science or society when it comes to GM crops." He added that there were more than 400 scientific papers pointing towards ill-effects of the GM technology.

Greenpeace senior campaigner Neha Saigal says, "Moily's clearance for field trials just before the country is going for Lok Sabha elections smacks of impropriety, to say the least. Clearly corporate interests have won over the people of this country."

Various farmers unions and political parties like Aam Aadmi Party (AAP), JD (U) and PMK are supporting the anti-GM lobby. The recent addition was Kerala agriculture minister who had issued a public statement that his state won’t allow any field trials of GM crops.

"We are hopeful that the next GEAC meeting will clear the new applications before the coming Kharif season," said Shri Ram Kaundinya, chairperson of ABLE-AG. ABLE-AG firmly believes that research and trials in GM technology should not be stopped as additional information from research and trials will help to assess the technology more accurately. it was very discouraging that the GEAC mechanism had come to a halt for the last two years.

N Seetharama, executive director ABLE-AG, issued a statement, saying, "We laud Shri Moily’s reaffirmation of his faith in the power of technology. At a time when agriculture is under severe stress and requires immediate infusion of technology and innovation, we can’t afford to ignore biotechnology which has a proven track record of enhancing crop yields in a safe and sustainable way the world over".