Godmen jostle for space near Sangam 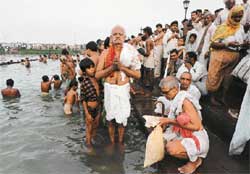 Thousands of sanyasis and sadhus who have reached Allahabad to take the holy dip in the Ganga during the Maha Kumbh. are jostling for space. This is because the river has changed its course and the Sangam, the confluence of the Ganga, Yamuna and the mythical Saraswati river, has shifted, and so the availability of land on the riverside has reduced. An irrigation department official said the Ganga has shifted west towards Allahabad Fort. The currents in the river are so strong that it is dominating the flow of the Yamuna. Though, according to Hindu scriptures, it is considered auspicious if the confluence is west bound, lack of space has dampened the spirits of the godmen who have come to stay at the Sangam for 55 days. This time the Kumbh will be longer by 11 days.

Although the area of the mela has been increased manifold this year—it is 194 hectares—godmen are fighting for land allocation for setting up their camps. They say the state government has given prime land, close to the confluence, to private trusts and societies, who gave bribes to get the spots. “We used to get half a bigha (one bigha equals 126.44 sq m) but now the area is less.

Moreover, we have been given space about 8 km away from the Sangam. The government has given more space, closer to the Sangam, to private trusts that have bribed the state officials,” alleges Mahant Ramkishore Das Ji Shashtri of Digambar Akhara. Genuine sadhus have been sidelined by the state government to give space to fake trusts, he adds. Unresolved differences over the allotment between the administration and the pontiffs of the four seats (peeths) established by Adi Sankaracharya made one of the influential religious leaders to leave the city.

Swami Swaroopanand Saraswati, Shankaracharya of the Dwarka peeth in the west, left for his ashram in Madhya Pradesh following the administration's refusal to allot land for “Sankaracharya Chatushpad”, for which the pontiffs of Puri in the east and Shringeri in the south have also extended their in-principle support.

To prove that the confluence has moved, scientists at IIT-Kanpur analysed satellite data of 1975, 1990 and 2000 (see satellite image). They say the shift is clearly visible. Ganga that flowed east-west at the north of Allahabad suddenly changed course towards the north-south direction. There is no change in the course of Yamuna. The experts feel it does not involve any great scientific reason, but the local currents and topography could have resulted in the shift. Yamuna is deep and Ganga is shallow, thus the former forces Ganga to divert towards it at the Sangam site. Quoting Padma Puran, Girija Shastri of Allahabad-based Jyotish Karmakand Evam Adhyatam Shodh Sansthan, an astrology research centre, says a dip at the Sangam, when it flows westwards, washes off sins of a billion years.

With the state expecting crowds to increase many times since the last Kumbh of 2001, the government is making arrangements to take in the voluminous crowds and ensure smooth passage of all bathing days, says director general of police A C Sharma. The last Kumbh saw 11 million people converge on Makar Sankranti (January 14) and 3.5 crore on Mauni Amavasya (February 10). On the land allotment problem, Sharma adds, “The change in course has reduced the land available on riverside. Therefore, satisfying everyone will not be easy for the government,” he adds.