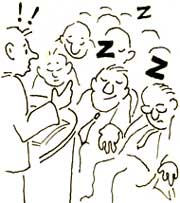 A GOOD night's sleep does wonders -- but not because it rests the tired brain as it has been proved that sleep is yet another form of mental activity. Scientists still have to identify the basic brain mechanism that brings about sleep and wakefulness or the real function of sleep, or the relationship between ageing, sleep and wakefulness.

A world conference on sleep-wakefulness was held in early September in New Delhi to bring together international research workers in this area. Sponsored by the World Federation of Sleep Research Societies and attended by more than 200 scientists, the three-day conference focussed on diagnosis and treatment of sleep disorders, especially of shift-workers with the growth of industrialisation.

Discussing sleep problems in shift workers, A Borbely of the Institute of Pharmacology in Zurich said, "During the day the entire system is not ready to sleep. Sleep at this time is more superficial and the person is distracted due to daylight and surrounding activity." Also, body temperature drops by 0.3 degrees C at night and this is related in some fashion to the body's own clock and its sleep-inducing pattern.

Experiments are being carried out to evolve a way to reverse the body's temperature cycle. The premise is that exposure to very bright light could help shift the body clock backward or forward. Research is also continuing on the hormone, melatonine, produced by the brain in much larger quantities at night, to see if a method could be evolved to reverse the sleep cycle for shift-workers.