The vulnerable tribe in Madhya Pradesh is the first to get habitat rights in India. It is a landmark in the forests rights movement 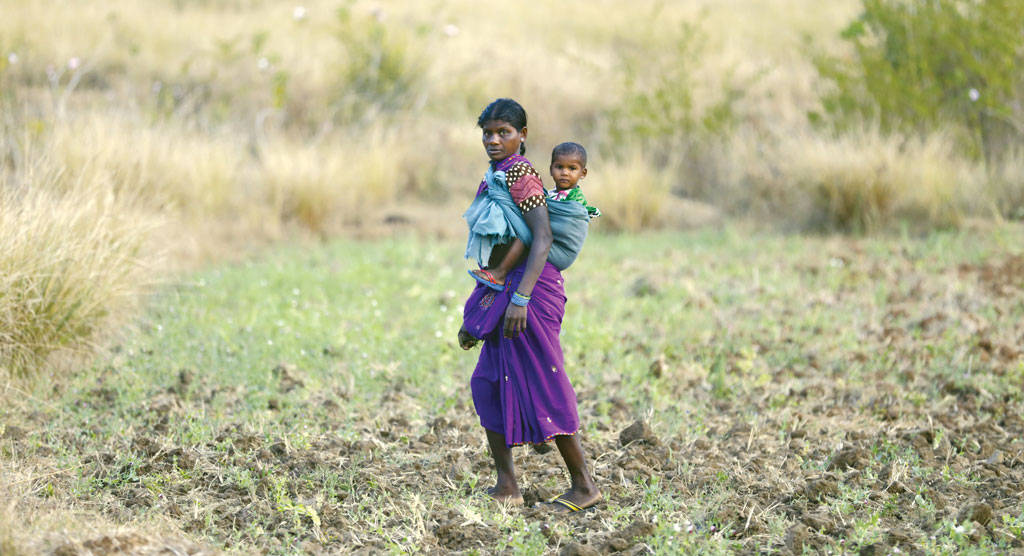 Living in the dense sal forests of Maikal Hills, where streams intersect their homesteads, the Baigas in Dindori district of Madhya Pradesh have gained the right to their habitat. This is for the first time habitat rights have been given under the Forest Rights Act of 2006. For the Baigas, it is a Pyrrhic victory that has come after a struggle for more than a century.

Habitat rights go beyond the individual and community rights conferred under the Act. They aim to protect not just land rights and livelihoods of the people living in forests, but encompass their whole culture and way of life. These are composite rights over larger landscapes covering multiple villages that recognise territories used by vulnerable tribes and pre-agricultural communities for habitations, livelihoods, social, spiritual, cultural and other purposes.

The Baiga community is one of the 75 particularly vulnerable tribal groups, or PVTGs, who are eligible to get habitat rights under the Scheduled Tribes and other Traditional Forest Dwellers (Recognition of Forest Rights) Act, also known as the Forest Rights Act (FRA). Over the years, increasing state control over forests and diversion of forest land for development and conservation have seriously threatened these forest communities.

Although gazette notifications dating back to 1890 provided the basis for giving habitat rights to the Baigas, the administration, activists, experts and community leaders were clueless about implementing such rights. The forest department’s reluctance to relax its control over forests only made it difficult. Even when the FRA enshrined this right in the law, in the absence of guidelines to implement these rights no one is sure of how to go about it. 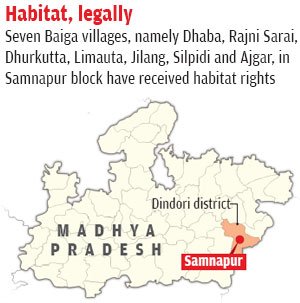 The definition of the habitat rights was incorporated through an amendment in the FRA in 2012. As per the amendment, the district level committee under the Act shall ensure that all PVTGs receive habitat rights, in consultation with the concerned traditional institutions of these groups, after filing claims before the gram sabha.

Participatory exercises to help the Baigas claim habitat rights began in 2013. “The exercise we conducted was to determine the habitat zone of the tribe, crops they grow, their cultural beliefs,” says Nirmal Joshi, Prime Minister’s rural development fellow, who is attached to the Dindori district collectorate to oversee the implementation of habitat rights.

District Collector Chhavi Bhardwaj held the first meeting with activists and Baiga members to recognise the rights in November 2014. Naresh Biswas, a forest rights activist in the region, says that to explain their habitat, the Baigas used the example of a tiger’s territory. Tigers roam a large area in a forest when they hunt, one of the tribals pointed out, adding that when national parks are created that whole area becomes the habitat of the tiger, not just its dwelling, which could be a cave. When the collector was convinced, a mapping exercise was undertaken in which villagers were asked to prepare their own maps. These maps were overlaid on the ones prepared with the help of GPS locators.

Community members and activists allege that the forest department opposed the claims to habitat rights. Initially, they did not even come to the meetings organised by the district collectorate, says Ujiyar Singh Dhurve, peoples’ represen- tative in the Zilla Parishad.

After three years of research, consulta- tion and mapping, it was in November 2015 that the authorities began handing over legal titles. Bhardwaj told Down To Earth that the right has been granted over 9,300 hectares (ha) to about 900 families in seven villages (see ‘Habitat, legally’).

However, in selecting these villages the district administration relied on a notification passed by the British in 1890. The notification recognised seven villages in the region as having limited rights over the forest. This area was called Baiga Chak. Today the Baiga territory is spread over 52 villages in the Samnapur block of Dindori. “If we were to really consider the area of the Baigas, it would begin in Achamakmar forests in Chhattisgarh to Amarkantak in Madhya Pradesh, an expanse that would include forests like Kanha,” says Ramesh Sharma, convenor of Ekta Parishad, a non-profit based in Chhattisgarh that works on tribal rights. “However, for the authorities that was not possible. This is still a small victory for the community.”

A history of persecution

The recognition of Baiga Chak came after several attempts by the British to remove the community from the forests. Historical accounts show the British were in desperate need of teak to build railways and ships, and the Baigas were resisting felling of trees. Shifting cultivation or bewar done by the Baigas was outlawed as one of the measures to drive them out of these villages, says Sharma. “However, some officials realised that the Baigas were completely dependent on forests and led a simple life, even as the other part of the administration was busy seizing their farming tools—a practice that continued till the beginning of the 21st century,” adds Sharma. 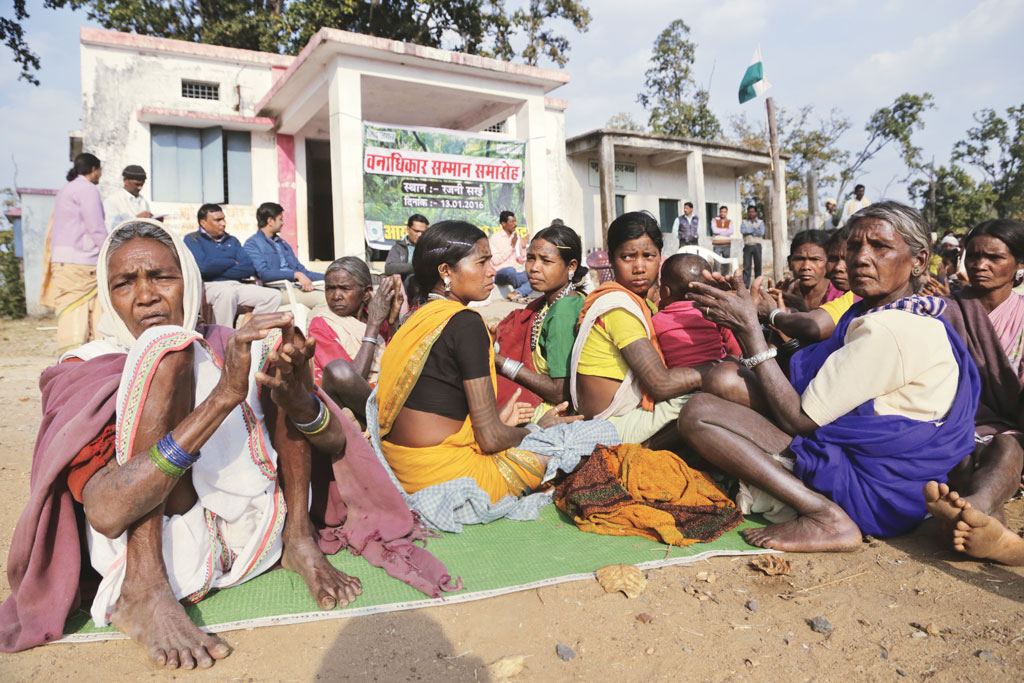 With the recognition of Baiga Chak, the community was allowed to practice bewar within the seven villages. But the recognition was short-lived. By 1927, the British government formed a new law related to transportation and collection of timber and forest produce, jeopardising the Baigas.

Ironically, after participatory exercises for habitat rights, the administration has come to appreciate shifting cultivation that protected and enriched soil. It involves mixed cropping of up to 18 varieties of grains, vegetables and mushrooms.

Wrong twist in the right

When distributing the land titles the Dindori administration told the people they are free to enjoy their ancestral rights over land and forest, and even State cannot transfer any of their land for non-community uses without their consent. However, people are not convinced. According to Dhurve, the forest department has other plans. A working plan of the department seen by Down To Earth shows that the Madhya Pradesh government plans a tiger heritage corridor focusing on wildlife tourism in an area 600 km long and 80 km wide. This will uproot not only the seven villages recently accorded habitat rights but also 45 others where Baigas coexist with other tribes like the Gonds.

The proposed corridor will span the buffer zones and tourism areas in Jabalpur, Dindori and Mandla districts. While forest officials were not available to comment on the status of habitat rights, Joshi says the district administration is yet to take any decision on the corridor. “We are working closely with the forest department so that habitat rights are not violated when the corridor comes up. We have worked closely with the community so that they can assert these rights,” he says.

Lalla Singh, sarpanch of Ranjda village in the area, says 96 individual claims were settled in his village, while community forest rights have provided the village with 24.5 ha. “The efforts will go waste if the wildlife corridor is allowed,” he adds.

Dindori district officials say the granting of habitat rights is still in an experimental stage. Interpretation of habitat rights under the FRA varies in languages. While the English interpretation uses the expansive meaning of the word “habitat” under Section 3 (e) of the Act, the Hindi inter- pretation, largely used in title deed, restricts the meaning of habitat to “gruh” meaning home and “awaas” meaning dwelling.

In case of habitat rights given to the Baigas, the Dindori administration used Section 3 (i) of the FRA, which, according to experts, is nothing but community forest rights. Although the title deed states that the Baigas have a right to habitat in collecting forest produce, cultivation near their homesteads and fishing, Section 3 (i) refers to a community’s right to regenerate and manage its forests. “Ideally, the district administration should have conferred these rights under Section 3 (e) which are rights to community tenures of habitat,” says Venkat Ramanujam Ramani, a scholar with the non-profit Ashoka Trust for Research in Ecology and the Environment, who is studying the Baiga habitat. “In effect, this means the government can potentially divert the rest of the forest (not mentioned in the title deeds) for other purposes.”

Most crucial is understanding what constitutes a habitat and lay down clear-cut guidelines for recognising habitat rights. While the Union tribal affairs ministry has commissioned a study to gain clarity on these matters, the report is yet to be published. But the trickle has started. A couple of other tribal communities, such as the Sahariyas in Madhya Pradesh and the Kutia Kondh in Odisha, have taken their first steps to claim their habitats.