Deserted villages are springing back to life as residents return due to lockdown. The state government has announced several schemes to retain them, but will they work?

Down To Earth (DTE) had visited Bondul village in Pauri in 2015 and found the village was inhabited only by Bimla Devi and Pushpa Devi (left), apart from a family. DTE's visit after the pandemic saw smiles back on the women's faces as their sons had returned home with their families (Photographs: Vikas Choudhary and Srikant Chaudhary)

Vikas Rawat, 38, is content plucking vegetables from his farm in Kathur village, about 15 kilometres from Pauri town in Uttarakhand. He will sell the vegetables in nearby villages after keeping some for his family.

Till six months ago, Rawat, who had a flourishing ‘hotel’ (dhaba) business outside an engineering college at Ghurdauri near Pauri, had not even dreamt of taking up farming. In March, when the government announced a countrywide lockdown to stop the spread of novel coronavirus disease (COVID-19), he feared his business would collapse.

So he called up many of his childhood friends from Kathur who had migrated to other cities for livelihood. Rawat proposed that cultivation could be the solution to the looming crisis. The friends agreed and decided to return home and rejuvenate their farms lying unused.

By April, Rawat and his friends were together growing beans, tomatoes, cabbage, capsicum and brinjal in 0.4 hectares (ha). They have also planted pulses and paddy.

All of them are confident of earning as much as they did in the city. Rawat has already sold three quintals of beans at Rs 40 per kilogram. Tomatoes, cabbage and capsicum are ripening now. He hopes to fetch a good price for these too. The input cost is also quite low as they use cow dung bought from neighbours as manure, not urea.

Rawat is among the 330,000 residents who returned to the state after the lockdown. Data with the Uttarakhand Rural Development and Migration Commission (URDMC) shows that while 80.68 per cent people returned to Uttarakhand from other states, 18.11 per cent came back from other districts of the state and 0.92 per cent of the migration was within the district.

The percentage of those who returned from abroad was 0.29. URDMC’s two-phase survey collected data on the number of people who returned from February 1 to March 1 and from April 1 to June 21. It states that Pauri-Garhwal and Almora districts witnessed maximum reverse migration (see below). 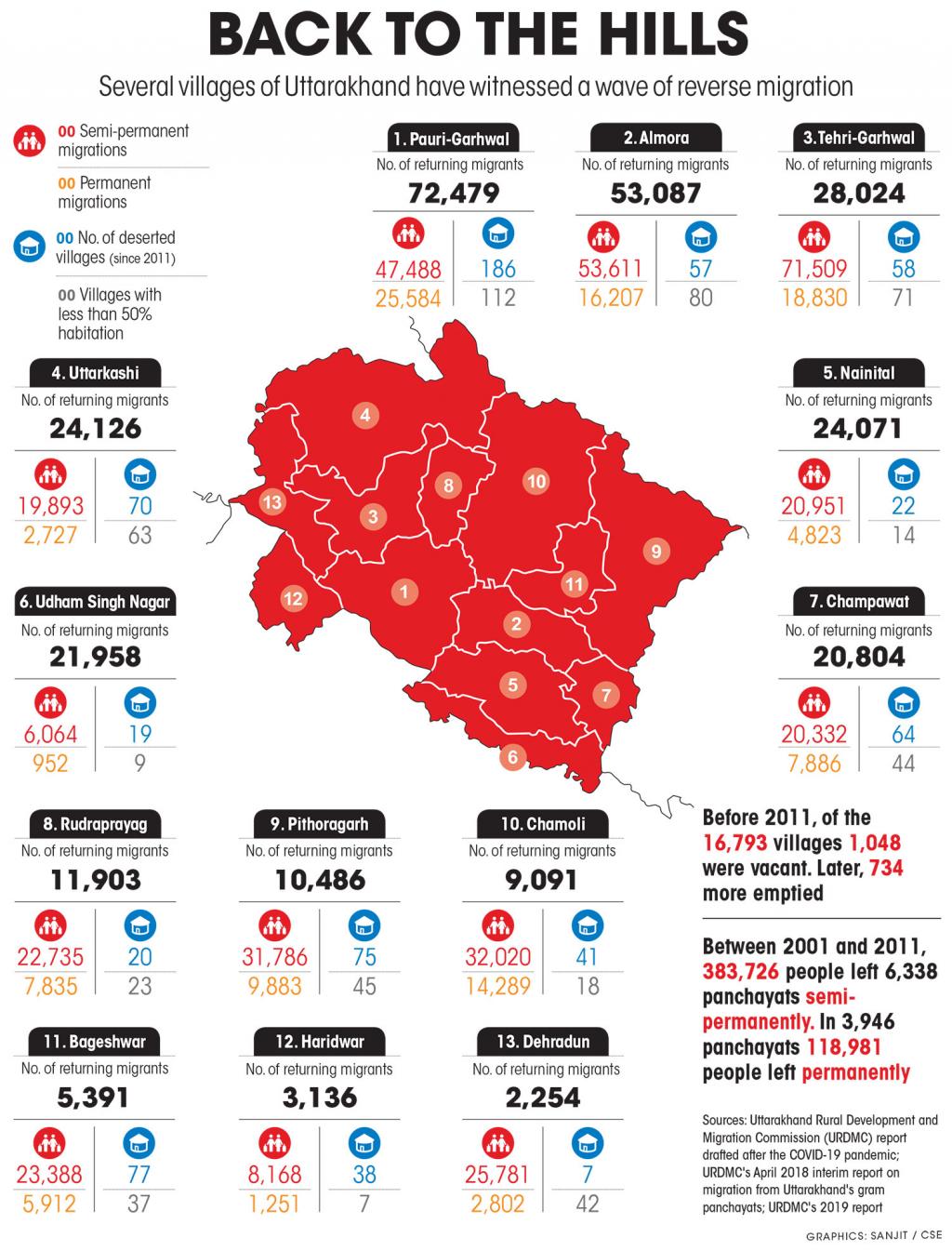 Take the case of Bondul village in Pauri’s Kot block. Down To Earth (DTE) had visited the village in 2015. Then, it was labelled a ghost village as only three families lived there. Of these, two families had only two elderly women — Bimla Devi and Pushpa Devi.

DTE returned to the village after the pandemic and saw the deserted village had come alive. The women were jubilant as their sons had returned home along with their families. Pushpa’s son Kishan Juyal did small jobs in Pune, but is happy now with the prospects of farming in the village.

He has removed shrubs from his field and sowed vegetables there. For now, he works under the Mahatma Gandhi National Rural Employment Guarantee Act (MGNREGA).

“It is better to be in the village considering the situation in cities after the pandemic,” says Bimla’s son Durgesh Juyal, who worked in a construction company in Gurugram. But he is apprehensive about his family’s future.

His schoolgoing daughter had started attending online classes after the lockdown. Here, getting education is difficult. The nearest school is five km away and there is no public conveyance. Due to the hilly terrain, it takes an hour-and-a-half to reach school and about three hours to return. “Also, there is no work for me here. What will I do?” he wonders.

But 28-year-old Kishan Dev Singh Katyal, who returned to his village Bonga in Pauri’s Kaljikhal block, is optimistic. He had to leave Delhi after Bausch & Lomb, the multinational he worked with, asked him to resign. He was among the hundred employees told to quit.

The company was already hit by the economic downturn, but the pandemic was crushing. Katyal now plans to grow mangoes and lychees in his 0.4 ha. “Land is so fertile here that farming can be really profitable,” he says.

The problem is that Katyal has nothing apart from his ancestral land. To sustain himself, he has started working under MGNREGA, digging pits and picking up stones. He hopes to get government help to start the business.

The Uttarakhand government is determined not to let its people flee again, says Chief Minister Trivendra Singh Rawat. “We have launched schemes one after another to turn this disaster into an opportunity,” he told DTE.

Under the Mukhyamantri Swarozgar Yojana, people will get 15 to 25 per cent subsidy to start business, be it in manufacturing, agriculture, horticulture or animal husbandry. Loans will be provided through banks. The cabinet has kept Rs 15 crore for this scheme, he says. This apart, districts would spend 40 per cent of their budget on helping people start entrepreneurial projects. 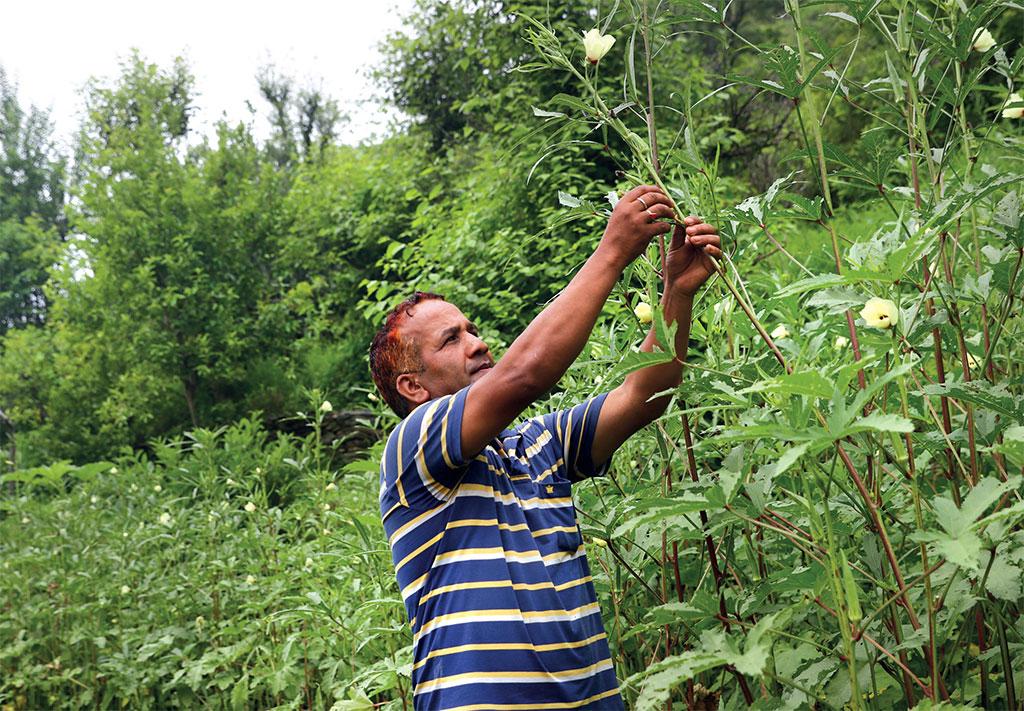 Under the Solar Self-Employment Scheme, people have been invited to set up 25-Kilowatt (KW) solar plants, he says. The government aims to employ 10,000 people under this.

“We are also targeting 10,000 people to start bike taxi service at tourist spots. Youth will get loans to buy bikes and the government will pay interest on the loan for two years,” he says.

Though many schemes have been launched, people are not aware about them, says Katyal. The few who do, are frustrated by lengthy paperwork.

A cooperative bank employee who did not wish to be named, told DTE, “When people come to our bank to enquire about schemes, they are told to first open an account and deposit 20 per cent of the loan they seek. This means, if they want a Rs 5 lakh loan, they first have to deposit Rs 1 lakh. So most people return disappointed. This apart, the borrower must have a government employee as guarantor. Who will guarantee anything during the pandemic?”

But considering that migration is not new to Uttarakhand, why does the state not have a working employment generation plan ready?

Uttarakhand is the second state after Uttar Pradesh to have witnessed large-scale and rapid migration, states the Economic Survey 2016-17. Interestingly, 35 per cent of the migrations happened after 2000, when the state was formed, says Integrated Mountain Initiative (IMI), a Delhi-based non-profit in its report State of the Himalayan Farmers and Farming.

While 246 people migrated daily, according to IMI, 50.16 per cent of the migrations occurred due to no jobs, 15.21 per cent due to lack of education facilities and 8.83 per cent due to absence of medical facilities, says the Economic Survey 2019-20. There were 5.61 per cent farmers who fled in distress as animals such as monkeys and pigs would regularly invade their farms and destroy standing crops.

“Farming has never been easy in the hills,” says Umacharan Baratwal, former member of Pauri block development committee. Because of the terrain, holdings are small and each farm is located at a distance from the other. Also, farmers have to completely depend on rains because irrigation is not possible in the hills. There is also the threat of less or excessive rainfall which ruin crops. 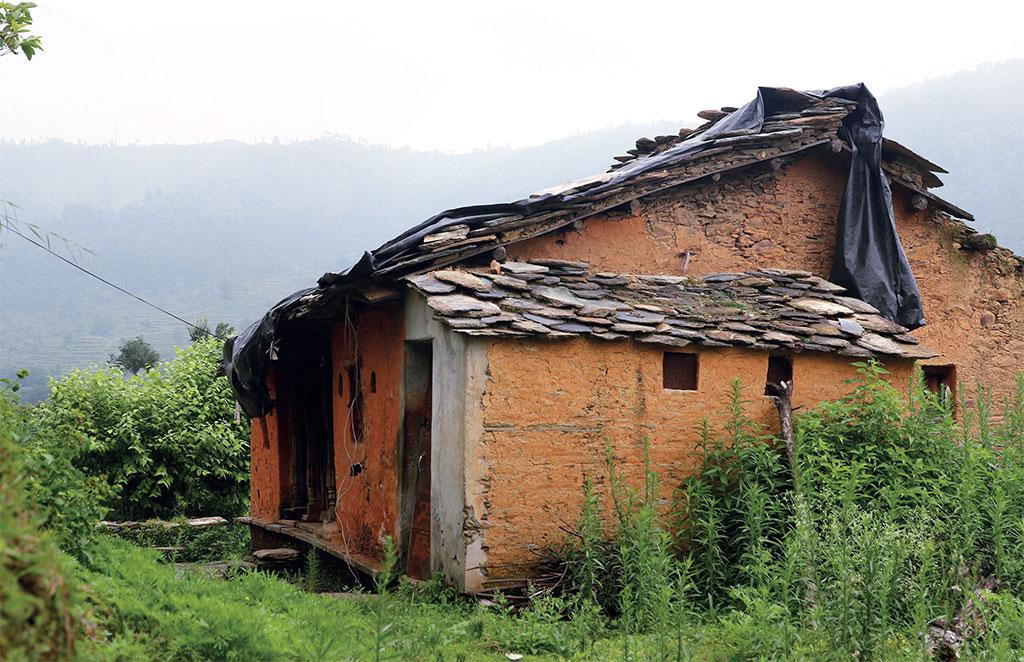 “In April, I spoke to over 90 migrants. Ninety per cent of them said they would prefer going back to the city because they were sure that earnings in villages would not be even 50 per cent of that in the city,” he says.

Ratan Singh Aswal, coordinator of the non-profit Palayan Ek Chintan, agrees. “We visited 10 districts and found that those willing to stay are still young and unmarried. Most people have families. They do not see monetary benefit in staying back,” he says.

“People should be guaranteed 200 days work and given Rs 300 as daily wage. This apart, youth who do not find work for 15 days should get unemployment allowance,” he says.

Anoop Nautiyal, founder of Social Development for Communities Foundation, a Dehradun-based research organi-sation, says, “The government should launch schemes keeping in mind that the people of Uttarakhand feel safer in salaried jobs as they lack entrepreneurial spirit.” The government must first reassure people that self-employment can be profitable.

What’s interesting is that apart from the residents of Uttarakhand, a large number of people have started pouring in from Nepal and Bihar to do agricultural labour, says Namrata Rawat, IMI programme coordinator.

Now, people have started spreading awareness so that farmers grow those crops which animals do not relish, like turmeric, ginger and cannabis. Such efforts are necessary, especially for people like Katyal who are determined to stay.

“The economic downturn and the pandemic has taught us that it is not safe to work in the cities. It will take time, but I know I will succeed,” says Kaytal with his jaws clenched.

This story was first published in the 1-15 September, 2020 print edition of Down To Earth