Despite the rise in wireless users in recent years, urban and rural India are miles apart in their online presence

Kuldip Kumar from Gummer village near Himachal Pradesh’s Jawalamukhi town was recently in deep distress. After the Union government announced a country-wide lockdown on March 24, 2020, the school where his children studied, decided to take online lessons. But Kumar did not have a mobile phone as well as the money to buy one.

He moved from pillar to post to get a loan of Rs 6,000. He approached banks and also private lenders, but failed to get it. Finally, he had to sell his cow.

Kuldip’s plight received a lot of attention after it was highlighted by journalists. Many came forward to help him. However, there are many others across India who have not been so lucky.

Take for instance, the primary school in Kota Gunjapur village of Madhya Pradesh’s Panna district. It has 31 registered students. After the school received orders to hold classes online, the principal, Rohni Pathak, organised a door-to-door survey to assess its feasibility.

“We found that households of only eight of the 31 students had mobile phones and just two were active,” Pathak says. Hakki Bai, a daily wage labourer belonging to the Gond tribal community, whose son Brij Kumar, 13, studies in the school, says the family does not have a phone.

“Even if we buy one, there is no power supply to charge it. I don’t know how he will catch up with studies once the classes start,” she says. “The situation is the same in other villages,” adds Pathak.

Education is just one area that has highlighted the digital divide between India’s rural and urban areas during the lockdown. The trend is evident everywhere — telemedicine, banking, e-commerce, e-governance, all of which became accessible only via internet during the lockdown.

But this growth only indicates the rise in basic telecommunication facility. Services such as online classrooms, financial transactions and e-governance require access to the internet as well as the ability to operate internet-enabled devices like phones, tablets and computers. Here the urban-rural distinction is quite stark.

Similarly, only 13 per cent people of over five years of age in rural areas have the ability to use the internet against 37 per cent in urban areas (see Network strength below).

“Urban areas have over 104 internet subscriptions per 100 people (many have dual SIM cards with internet connectivity), while the figure for rural areas is a little over 27. Such numbers confirm the extent of India’s rural-urban digital divide,” says Apar Gupta, executive director of Delhi-based charitable trust Internet Freedom Foundation. 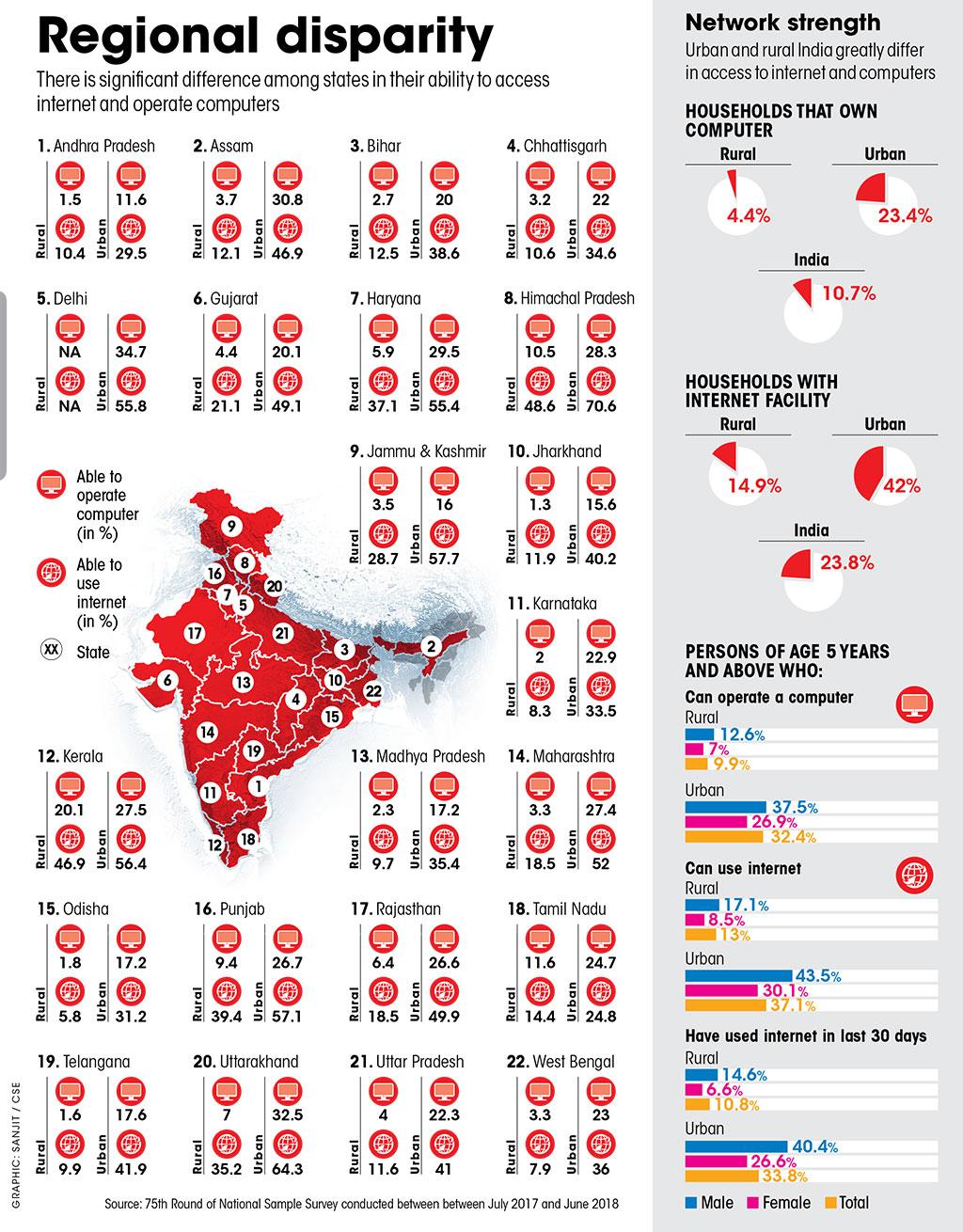 Clearly, the internet penetration is not deep enough. “At one level, we all recognise that the internet has become indispensable. On another level, it still doesn’t have adequate attention of the decision makers,” says Aruna Sundararajan, former secretary in the Union government’s telecommunication department and member of Kerala’s COVID-19 task force.

The first thing we recommended was to ensure uninterrupted internet services, she says. “We put in suggestions that people who normally don’t have access to the internet, need to be given access because they are the ones who require it most,” she says.

There is another dimension to the problem. Smriti Parsheera, a lawyer and policy researcher with Delhi-based National Institute of Public Finance and Policy, who interacted with several students in Himachal Pradesh government schools during the lockdown, says most students are from families that have only one mobile phone.

“The earning member of the family has to carry the phone while going out to work. In a family that has, say, three children, how does one decide who gets to attend classes, assuming the phone is accessible,” says Parsheera.

There is also a gender divide. The Mobile Gender Gap Report 2020 released in March by GSMA, an association of industry organisation representing interests of mobile network operators worldwide, says that while 79 per cent men own a mobile phone in the country, the number for women is 63 per cent.

The gender gap in mobile internet users is a huge 50 per cent, it states. Access to phones and the internet is not just an economic factor but also social and cultural. If one family has just one phone, there is a good chance that the wife or the daughter will be the last one to use it, says Parsheera.

There has been a significant push towards digitalisation from both the government and the private sector, triggered by the government, in the past five years. The year 2014 saw the launch of the National Digital Literacy Mission, with the target to train one million people in selected districts in 18 months, followed by the launch of Digital Saksharta Abhiyan the same year to train an additional 4.2 million people in four years.

The schemes, say critics, overlapped and were only partially successful (see Official push for digital below). Internet traffic saw a big jump after the launch of Reliance’s Jio phone in 2017, which provided free voice calling facility and data packs in the initial period after its launch. This is corroborated by the Nokia MBiT Index 2020, which shows that data traffic in India has increased by 44 times in past four years.

Still, there is a huge population on the wrong side of the divide, lacking access to a technology widely considered a fundamental right. “Most of them belong to the most vulnerable sections of society,” says Parsheera.