Despite being eligible, 1.7 million people in Jharkhand do not get pension

People from across Jharkhand gathered near the Raj Bhawan in Ranchi for a Jan Sunwai-cum-dharna (public hearing-cum-protest) organised by the Right to Food Campaign and Pension Parishad on September 28. People from different districts raised issues around pension and its delivery to the beneficiaries.

The main demand of the people was to make pension a universal scheme in Jharkhand. Currently, it is only limited to BPL families. Moreover, districts have separate quota systems which further exclude even those who are eligible for availing benefits. People also demanded stopping the practice of making Aadhaar mandatory for availing pension benefits. It has been creating a hassle for them. While those who have no Aadhaar or could not seed their Aadhaar are excluded, even those who have Aadhaar face difficulties in getting pension as it is often transferred to other bank accounts.

The protesters pointed out that the Centre and state’s shares of different pension schemes are ridiculously low. The pension amount, according to them, should be at least Rs 2,000, considering the fact that these schemes are for the most vulnerable sections of the community who lack any means to survive.

Apart from these, Jharkhand has its state social security pension schemes, too. Rs 600 is given to each person eligible under the scheme. It has provisions for old age pension, widow pension and Adim Janjati pension for the PVTGs (particularly vulnerable tribal groups).

The other two schemes under NSAP are the National Family Benefit Scheme (NFBS) and Annapurna Yojna. Under NFBS, in the event of the death of primary bread winner of the family (age between 18 and 64 years) the family gets a one-time Rs 20,000. 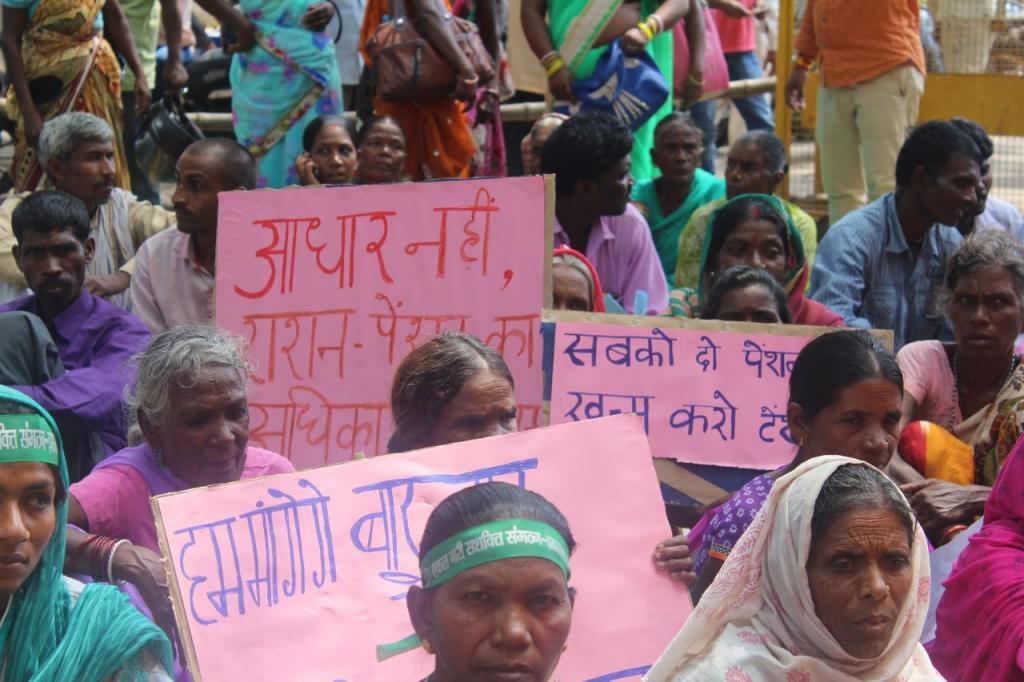 The eligible senior citizens, who are not covered under the Indira Gandhi National Old age pension scheme, would be covered under Annapurna Yojana and each person would be provided 10kg of free rice each month. However, in rural Jharkhand, one has to work really hard to even get one such beneficiary who could ever get any benefit out of these schemes.

Among many participants at the public hearing on September 28 was Manmaasi Tirkey of Nagri Block. He described how his wife, despite being eligible for a disability pension, had been denied her pension for the last four years and how every time he had approached the administration he was told that fresh documents will have to be submitted.

Sushila Devi from Jagannathpur in Ranchi is eligible for a widow pension, but she hadn’t got any pension for the last five years.

There were innumerable cases where pension was not given to eligible people as their Aadhaar cards were not seeded. Many had issues in their Aadhaar document (name mismatch, age mismatch, etc) and hence, were denied their pension. Some people had complained that their names have been enrolled but for some reason they are not getting their pension. Untimely payment is a common thing, which even the beneficiaries have stopped complaining about, accepting it as a normal delay in transaction.

Almost every participant who spoke about the hassles and delays in getting enlisted  under the schemes and how the authorities  keep coming up with excuses like KYC not done, issues with internet connection and software, non- availability of staffs, and exhaustion of quota.

Mahendra Singh from the NREGA Sahayata Kendra, Chandwa had shared how Chintamani Sahoo from Latehar was denied his pension for the last three years. Due to wrong seeding of Aadhaar and bank account, his pension amount was going to some Sanjay Kumar Sahoo’s bank account. This is not new as there are hundreds of such cases where NREGA wages and pension amounts have gone to non-beneficiaries’ bank account due to seeding errors. Cases of NREGA payments going to Airtel payment banks were also reported earlier.

Putting up a fight

People of Jharkhand are putting up a brave fight against the abysmal public service delivery system in the state and deprivation from the central government. While thousands of people came out on the streets of Ranchi last February to oppose DBT (direct benefit transfer) in public distribution system, compelling the government to roll back the policy, there has also been fierce opposition in the state against Chhotanagpur Tenancy Act and Santhal Pargana Tenancy Act amendment. Millions of people in the tribal heartland had heaved a sigh of relief when the Governor disapproved the proposed amendments.

The struggle on the streets and at the court is gaining momentum as we head towards 2019 General Elections. The Centre and the state have failed to respond to people’s need and address the issues of the poorest of poor. Ahead of the 2018-19 Budget, 60 renowned economists wrote to the Finance Minister of India for enhancing the central share of social security pensions to Rs 500; the government did not respond. While the NREGA workers hold dharnas, demanding their rights for minimum wage, the government does not respond. While millions can be spent on advertisements and self-promotions, social welfare and well-being of citizens do not seem to be on the government’s priority list. While the opposition is trying to corner the government on Rafale and bullet trains, issues like payment under MNREGA, ration, pension, and return on agricultural activities—which continue to be the main struggle at the grassroots level—are still missing from the opposition’s agenda.