The magistrate of Nyoma subdivision in Ladakh ordered Oil and Natural Gas Corporation (ONGC) August 23, 2022 to practise the highest standards of precaution at the geothermal energy plant in Puga Valley, according to officials.

Local naturalists alleged that the plant poses several environmental risks and is flouting green norms. A review meeting by the Union territory’s (UT) power development department was held August 20 based on the allegations.

The order that was based on decisions made during this meeting also warned the company of charges under Section 133 of the Code Of Criminal Procedure, 1973 (removal of nuisance from public place) in case of further violation. The secretary of the department also asked for the constitution of a joint team to visit the site and submit a field report.

A team of the Wildlife Conservation and Birds Club of Ladakh (WCBCL) visited the Puga geothermal project site on August 16, 2022 and discovered that the geothermal fluid discharged during the ‘exploratory drilling’ was being released directly into the Puga nullah.

Appalled at the sight of dark and steamy fluid mixing with crystal clear stream water, they had reported the matter to the district collector of Leh with photographic and video evidence.

They even raised the issue on social media. “ONGC is least bothered about the impact on the environment and there is no one from the UT administration to supervise the project,” said Tsewang Namgyal of WCBCL.

“Sumdo village is only 2.5 km downstream from where fluid is released into the Nulla. Wild animals and cattle also drink water from the nullah,” he added.

Puga, which has long been recognised for its geothermal potential, is also a staging ground for migratory birds.

Puga is an important staging site for migratory birds in the Central Asian Flyway. Many birds, including the black-necked crane, feed along the grassy banks of the stream flowing through the Puga valley.

“Therefore, potential negative impacts of the ongoing geothermal research project and any subsequent larger efforts need to be assessed to prevent damages to this fragile Trans-Himalayan ecosystem,” he said.

ONGC Energy Centre (OECT) had presented a proposal to establish the Ladakh Geothermal (1 MW) Field Development Facility at Puga to the Ladakh State Board for Wildlife on October 4, 2021, seeking its approval. A tripartite memorandum of understanding, however, had already been signed between Ladakh Autonomous Hill Development Council, UT administration and OECT on February 7, 2021.

Also, notwithstanding the concerns raised by some experts about the environment, the Chairman of the board approved the project without any mention of the required safeguards. It was reasoned that the proposal was only for “a research project”. 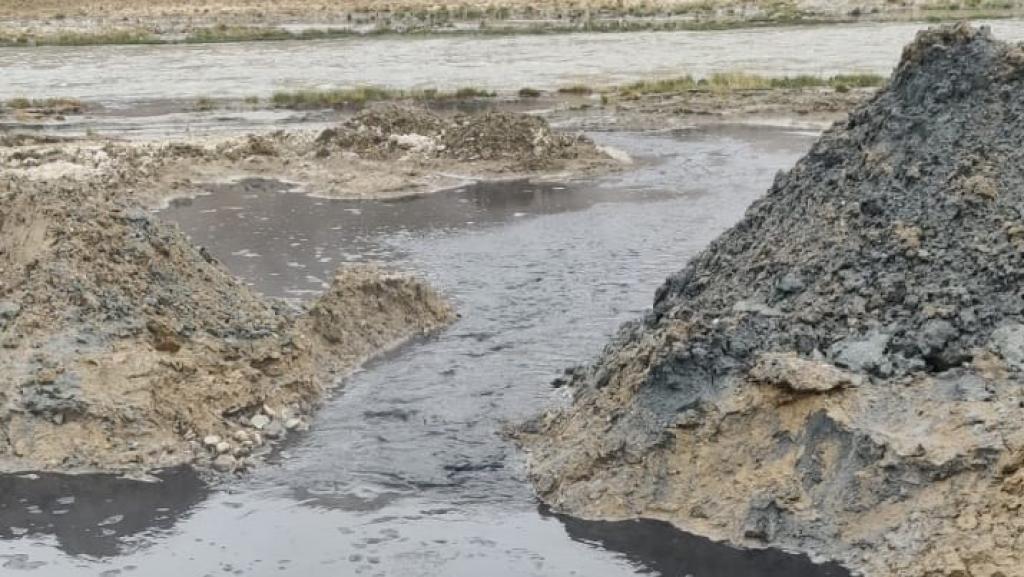 Tsering Tashi, founder of charitable trust Ladakh Science Foundation, was of the opinion that the project should be monitored by a committee of experts from reputed scientific research institutions.

There are various types of geothermal plants and the best practice in implementing any of these processes is to pipe back the geothermal fluid — after tapping the heat from it, into the ground through a re-injection well.

The geothermal fields at Puga are classified as ‘low enthalpy’ and ‘medium enthalpy’ geothermal reservoirs, and a feasibility study of utilising low enthalpy geothermal energy indicates that the binary-cycle process may be best for Puga.

Puga has the potential of generating 1.5 MW using a binary plant, according to an assessment by the government power development corporation. The geothermal ‘binary power plant’ has a two-fluid heat-exchange process where fluids exchange heat without coming into direct contact with each other. They are separated by a solid heat-conducting wall to prevent mixing.

The system is also meant to be in a ‘closed cycle loop’, where the geothermal fluid is re-injected back into the underground reservoir and the working fluid is condensed to a liquid state before heating again.

"Geothermal energy is clean; it requires only a fifth of the area in comparison to areas required for harvesting equivalent energy from solar panels,” said Dolma. “The technology can work at 90-95 per cent efficiency, in comparison to solar energy technology that can convert only about 20 per cent of received sunlight to usable energy.”

“However,” she added, "even small-scale exploratory research projects can have environmental impacts that require assessment and mitigation built into the exploratory process."

There are a couple of things that should have been in place before taking up the exploratory drilling: ‘Reinjection well’ to reinject geothermal discharge from the drilling into the underground reservoir and ‘blow out preventer’ to stop discharge from leaking into the environment from the bore-hole.

These technical requirements, meant for risk mitigation, have cost implications. But policy approaches focused on ‘development’ routinely externalise these costs, as in this case to be borne by the environment.

Puga nullah has important characteristics of astrobiological significance. There is growing evidence that the local hot springs may be associated with the origins of life. Studies in the boron-rich Puga geothermal system may provide important insights into the setting for the origin of life.

When the depth of the drilling at Puga is shrouded in secrecy and there is no statement from the administration on whether the geothermal fluid was tested for hazardous material, precaution demands that the dumping of geothermal fluid into the nulla be stopped immediately.

However, the local conservationists are sceptical because the joint assessment team does not have any geothermal experts and there is no date mentioned for the field visit.

In such a situation there has to be an urgent mitigation and bureaucratic procedures can only cause more delay, said a distressed Daya Dorjey of WCBCL. “ONGC is answerable to why there was no required preparedness and why precaution was not taken even before drilling began.”

Clean but not without risks

Fossil fuels have powered the flourishing of humans on the planet and triggered an unprecedented climate change that now threatens them. There is a desperate need to look for clean renewable energy to sustain the human population that is approaching 8 billion.

Geothermal energy has this potential, though it has its drawbacks with risks from minor seismic events, hazards from arsenic-rich geothermal fluids and eventually most of the geothermal fields will cool down and become unproductive.

The utilisable geothermal energy is the heat from Earth’s mantle that is transferred to the 40-km thin surface crust of the Earth. Geothermal fluids — essentially water ‘trapped’ deep down in the fractured rock which flows into ‘drilled geothermal wells’, is the medium from which the heat is harnessed.

Visible manifestations of geothermal energy include eruptions of lava, water, and steam and they occur around geological faults between tectonic plates. These sites have fractures in the Earth’s crust and are the potential locations where drilling for geothermal energy is undertaken.

The administrative area of the Union Territory of Ladakh straddles two tectonic plate sutures — the Indus suture and the Shyok suture.

The Geological Survey of India, as early as the 1970s, has explored the geothermal potential of these areas. Now, the UT that aspires to be ‘carbon neutral’ is developing a geothermal energy project as a “clean energy” option. So, the path towards this transition should also be clean.